FOX 10 speaks to the Sears Fire Incident Commander to learn more about how firefighters are tackling the 14,000 acre fire burning in the Tonto National Forest.

The fire remains at 14,476 acres and is now 60% contained. Tonto National Forest officials said this will be the final update and provided the below statement.

"Residents and visitors to the area may see occasional smoke over the next several days as interior pockets of vegetation continue to burn within the fire perimeter. Large ash whirls (similar to dust devils) are frequently seen within the burned area as well.

Firefighters continue to monitor areas around critical infrastructure on Humboldt Lookout and are closely monitoring structures in the Camp Creek recreation residences. Road grading to repair impacts from firefighting vehicles on Seven Springs Road (NFSR 24) and Horseshoe Road (NFSR 205) was completed over the weekend. There are approximately 60 personnel assigned to the incident consisting of engines, hand crews, water tenders and helicopters.

The Sears Fire Closure Order has been modified to reopen Seven Springs Road (NFSR 24) and Horseshoe Dam Road (NFSR 205). Bartlett Dam Road, Bartlett Lake recreation sites and marina are also open. Please slow down and watch out for firefighters and equipment that are working in the area."

Bartlett Damn Road and Bartlett Lake has reopened, but officials ask that the public watch out for firefighters working in the area.

Parts of the Maricopa Trails remain closed, and the closure will remain in effect through October.

“Taking preemptive measures such as nighttime burnouts of targeted areas to protect values at risk has proven to be a successful strategy in keeping the Sears Fire within the current firelines,” said Incident Commander Andy Mandell, of the USDA Forest Service. “So far, our flexibility to adjust our tactical resources based on weather conditions and fire behavior has helped us get ahead of this fire, but we can’t let up," Tonto National Forest officials said.

There are approximately 200 personnel assigned to the incident consisting of engines, hand crews, water tenders and helicopters.

"Today, firefighters will continue to hold and improve firelines in anticipation of higher winds out of the east 7-12 mph with gusts to 20 mph. Operations include the mop up and patrol of firelines along the west perimeter of Seven Springs Road in the Deer Creek drainage and at Humboldt Lookout. Fire crews are in place to monitor and protect critical infrastructure on Humboldt Lookout and are closely monitoring structures in the Camp Creek recreation residences," Tonto National Forest officials said.

"To the east, fire crews will continue to mop up and patrol firelines along Horseshoe Road along with mopping up the spot over that occurred Sunday evening near the Verde River. KV powerlines in the area remain impacted by smoke and lower Camp Creek powerlines have been de-energized."

Four homes and 10 outbuildings have been destroyed in the fire, which is still 15% contained and has burned 14,241 acres.

"Mop up and monitoring of the fire’s southern perimeter continues, and burnouts are being conducted as needed to secure the eastern perimeter of the fire around Horseshoe Road," Tonto National Forest officials said in a news release. "The public should expect increased smoke during burnout operations."

Some residents were forced to evacuate from their homes as the wildfires grow and winds increase.

Tonto National Forest officials say another residence and four additional outbuildings near an area called Honeymoon Seep have been destroyed by the fire. 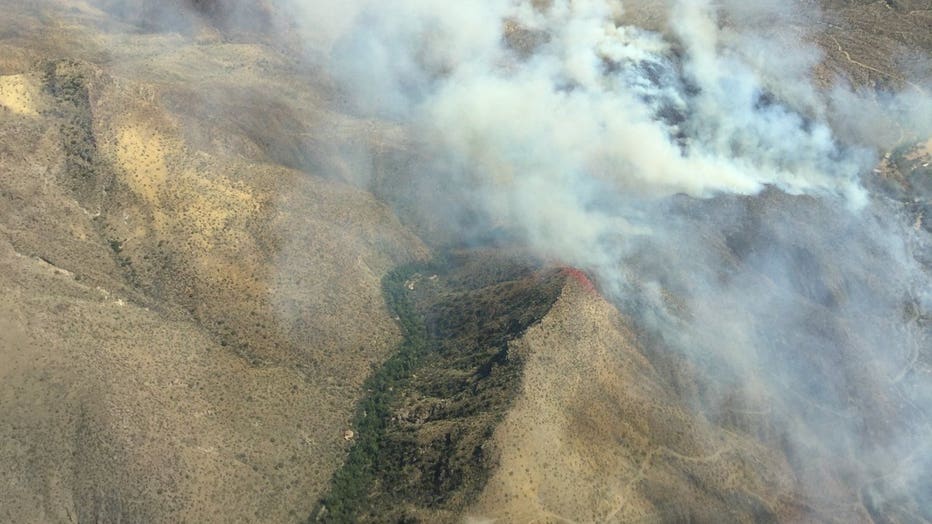 The fire remains at 0% containment and has grown to 9,200 acres.

"Firefighters are using a combination of direct, indirect and point/zone protection to preserve values at risk. This wildfire response strategy is designed to protect specific assets or highly valued resources from the fire. Crews continue to construct firelines, with airtankers and helicopters making targeted drops with retardant and water to contain and suppress the fire. KV Powerlines in the area remain impacted by smoke. Yesterday’s operation was centered around preventing the fire from damaging Camp Creek recreation residences."

The Sears Fire has burned 8,700 acres of grass and brush since it broke out during the afternoon of Sept. 25.

The Bartlett Lake area, boat ramp and marina remain closed until further notice as a precaution.

No injuries or structure damage has been reported but on Sept. 26, Forest Service officials said the Humboldt Lookout and FAA communication equipment are threatened.

Officials estimate the wildfire will be contained by, Thursday, Oct. 15.

Fire crews are battling a 5,200-acre wildfire near Cave Creek in the Tonto National Forest.

The Sears Fire is burning on Cave Creek Road near Forest Road 24 and the Sears Kay area.

The Bartlett Lake area, boat ramp and marina close at noon on Sept. 26 until further notice as a precaution.

Tonto National Forest officials say there are engines and aircraft responding to the scene.

No structures have been damaged.

Fire crews are battling the 450-acre Sears Fire that started on Sept. 25.