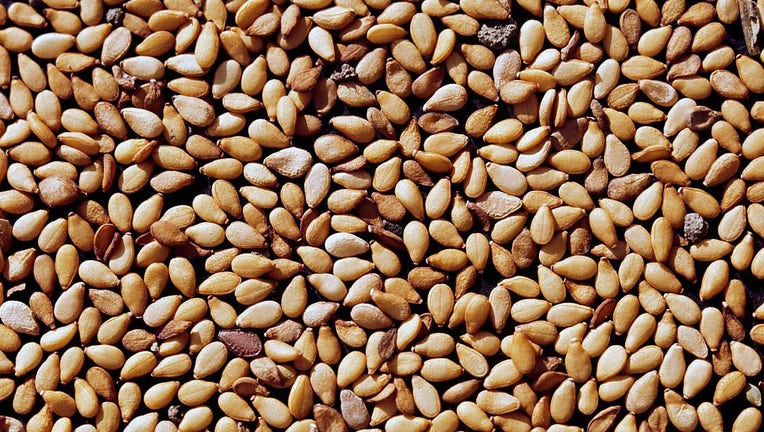 Sesame seeds are pictured in a file image. (Photo by DeAgostini/Getty Images)

WASHINGTON - Sesame has officially been added to the U.S. Food and Drug Administration's list of major food allergens.

A new federal law went into effect on Jan. 1 that requires all foods made and sold in the U.S. to be labeled if they contain sesame, which is now the nation's ninth major allergen and joins milk, eggs, fish, shellfish, tree nuts, peanuts, wheat, and soybeans.

Sesame can be found in obvious places, like sesame seeds on hamburger buns. But it is also an ingredient in many foods from protein bars to ice cream, added to sauces, dips and salad dressings, and hidden in spices and flavorings.

Under the new law, enforced by the FDA, companies must now explicitly label sesame as an ingredient or separately note that a product contains sesame. In the U.S., ingredients are listed on product packaging in order of amount.

Sesame labeling has been required for years in other places, including Canada, Europe, Australia, and New Zealand.

If the ingredients don't include sesame, companies must take steps to prevent the foods from coming in contact with any sesame, known as cross-contamination.

The legislation passed in the Senate last March and the House in April, receiving bipartisan support. It was signed into law by President Joe Biden the same month.

More than 1.6 million people in the U.S. are allergic to sesame, some so severe that they need injections of epinephrine, a drug used to treat life-threatening reactions. Cases of sesame allergy have been rising in recent years along with a growing number of foods that contain the ingredient, according to Dr. Ruchi Gupta, a pediatrician and director of the Center for Food Allergy & Asthma Research at Northwestern University.

"Sesame is in so many things that people don’t really understand," Gupta told the Associated Press in December.

"In families that do have a sesame allergy, it is truly challenging," Gupta added.

Sp to one in six adults with sensitivity to peanuts developed it after age 18, study finds

At least 4.5 million adults in the U.S. are impacted by a peanut allergy, according to researchers.

Advocates for families coping with allergies lobbied for years to have sesame added to the list of major allergens. And while many welcomed the ninth addition, some food industry experts warned that the requirements are so stringent that they are having unintended consequences — increasing the number of products with sesame.

Last month, food industry experts told the Associated Press that many manufacturers, especially bakers, find it simpler and less expensive to add sesame to a product — and to label it — than to try to keep it away from other foods or equipment with sesame.

As a result, several companies, including national restaurant chains and bread makers that stock grocery shelves and serve schools, are now adding sesame to products that didn’t have it before. While the practice is legal, consumers and advocates say it violates the spirit of the law aimed at making foods safer for people with allergies.

"It was really exciting as a policy advocate and a mom to get these labels," Naomi Seiler, a consultant with the Asthma and Allergy Foundation of America whose 9-year-old daughter, Zoe, is allergic to sesame, told the AP. "Instead, companies are intentionally adding the allergen to food."