Wednesday was a positive chapter for a South Oak Cliff basketball player, as Kylon Owens was surprised by Shaquille O'Neal at JCPenney in Hurst.

But Wednesday was a positive chapter for one of their players, as Kylon Owens was surprised by Shaquille O'Neal at JCPenney in Hurst.

Owens stands out in the crowd because of his height, but he got the big surprise because of how he stands out as a leader. He's easy to spot on the basketball court, and his family is not afraid to yell his name in the stands.

Owens, who is a senior at South Oak Cliff High School, is listed as a 6-foot-9 basketball player. And on Wednesday, he got some help suit shopping from an NBA great.

“I am proud of you, everything you are doing in school,” O’Neal told Owens when they were introduced.

Owens’ parents said it’s a struggle to find clothes that fit their son. When JCPenny learned of his dedication on and off the court, they called in their big and tall ambassador, and Shaq stepped in to help.

This was a pleasant surprise for Owens. He was on the court when gunshots rang out Saturday at his high school basketball game, and now he got to meet someone he looks up to. 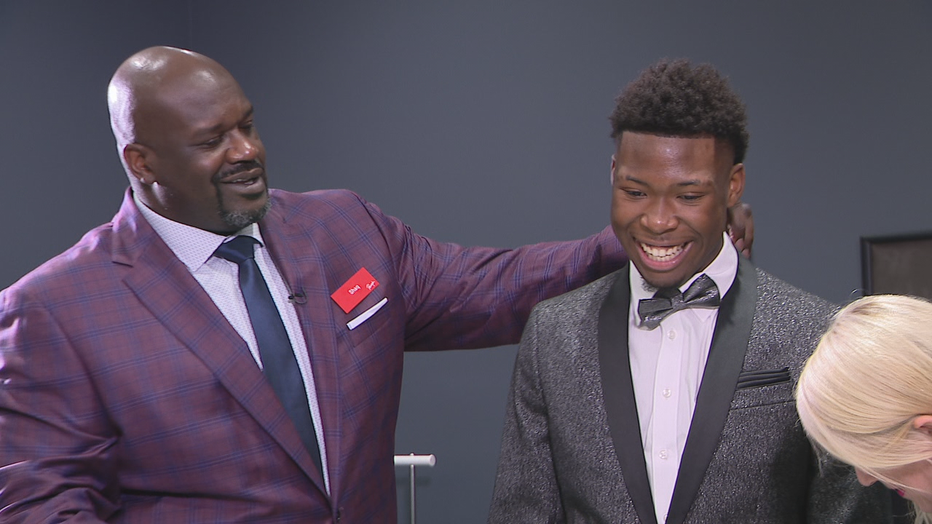 The shooting suspect and victim had no connection to South Oak Cliff High School, but Owens is fully aware of what’s going on in the Dallas community as a whole.

Owens wrote and presented the following poem a few months ago during homecoming: “See the lack of opportunity leads to our alumni getting gunned down in the streets. All we know is the streets, but faith overcomes that, so Lord, please let my people’s minds free.”

His coach and school administrators say Owens is a leader. That’s something Shaq said he noticed instantly.

“Guys like that, they become future leaders, I can tell he has a future on and off the court. If basketball doesn't work out for him, he is going to be fine, very bright kid,” O’Neal added.

Basketball is Owens’ passion, but he knows life is bigger than the game. So he strives to be a positive light for all to see.

“In my neighborhood, in my community, it is very hard. I am fortunate to have two parents in the home so I try to be there for my teammates, there for whoever and be a good example,” he explained. ​

Just hours after Shaq surprised a Dallas ISD student, the NBA legend made another appearance.

Wednesday night was the first time this season South Oak Cliff HS will play in their new gym. In the stands cheering for Owens and his team was Shaq, who decided to stay in town and watch him play.