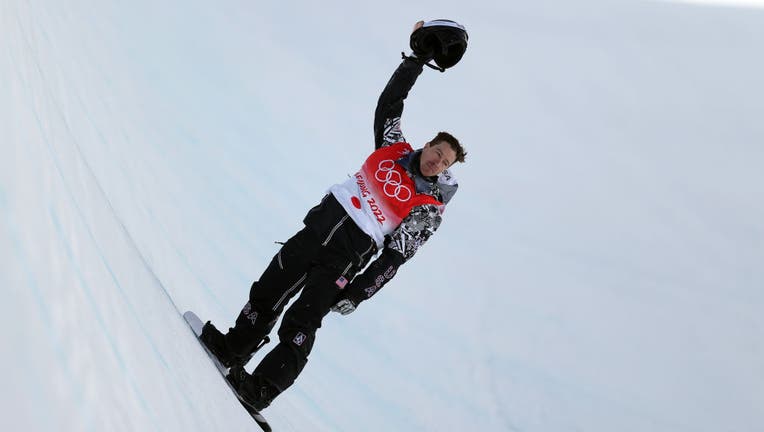 Shaun White of Team United States reacts during the Men's Snowboard Halfpipe Final on day 7 of the Beijing 2022 Winter Olympics at Genting Snow Park on February 11, 2022 in Zhangjiakou, China.

BEIJING (AP) - In Shaun White’s farewell performance on Friday, Ayumu Hirano of Japan won an elusive Olympic gold in the halfpipe with a boundary-pushing final run.

There was no doubt about the winner after Hirano's electric performance as the last rider to go. His run included an intricate and unprecedented series of flips and spins that pushed a sport obsessed with progression to new heights. His score of 96 reflected that and the two-time Olympic silver medalist moved past Scotty James of Australia, who scored 92.50. Jan Scherrer of Switzerland took bronze.

White finished in fourth place as he fell on the final run of a career that's seen the American star win three Olympic titles. He lifted up his goggles and waved to the crowd on his way down the halfpipe. He teared up as the sparse crowd bid adieu to the 35-year-old and fellow riders lined up to hug him.

"I wanted it," White said. "My legs were giving out on me every hit."

The stage was being set for some controversy after the second run. James took over the lead with his second attempt. Hirano followed with an impressive run that included the difficult-to-do triple cork but wasn't rewarded by the judges. The crowd booed and social media was buzzing.

"I know when I’ve seen the best run that’s ever been done in the halfpipe. ... It’s a travesty to be completely honest with you. I’m irate," NBC snowboard analyst Todd Richards said. "What’s the point of doing the triple cork, this most dangerous of dangerous tricks if you’re not getting rewarded?"

Hirano went out and did the trick again — ever better this time.