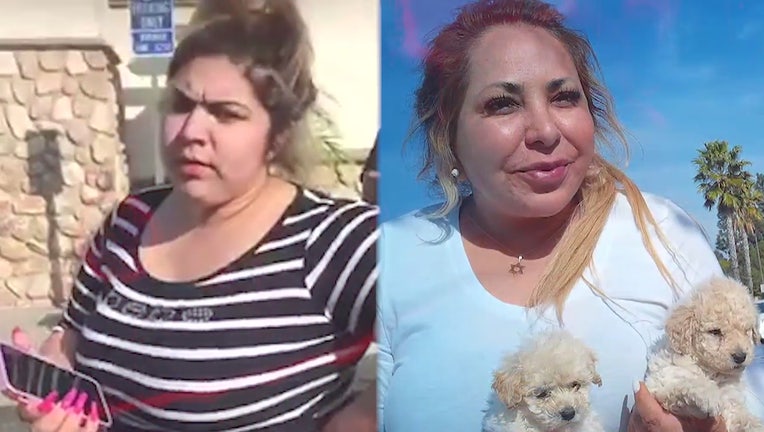 Just five months ago, a series of FOX 11 investigations helped bring notorious sick puppy seller Gustavo Gonzalez to justice. After several reports and confrontations, Gonzalez was arrested in June on dozens of charges of felony animal cruelty, and is facing decades in prison.

Now, numerous victims have contacted FOX 11 alleging that two Inland Empire women have been working together in recent months to use fake names and different phone numbers to illegally sell sick puppies that die within days of coming home, then disappear. 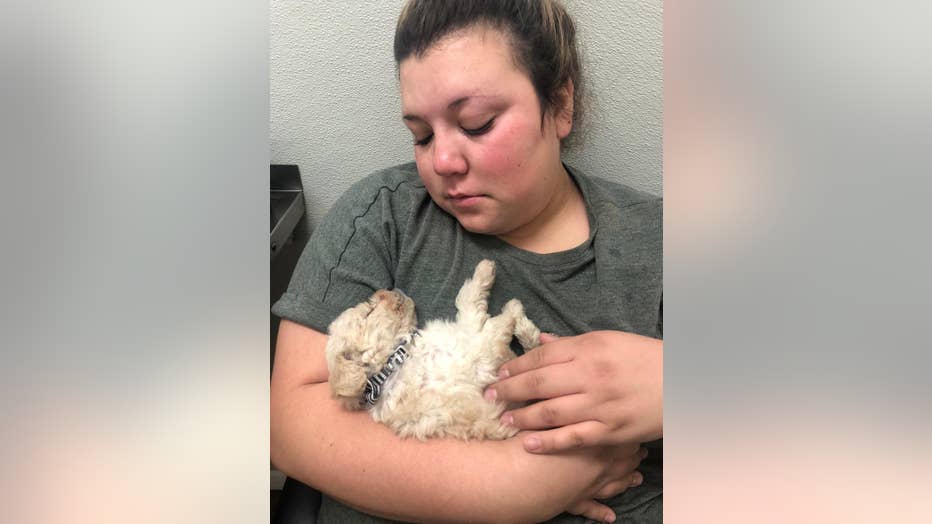 Police and victims identify the women as Alexis Hinojosa, and Vanessa Rodriguez of Fontana, and Covina high school senior Hanna Bowman tells FOX 11 she had her encounter with them in July.

“She doesn’t care about any of the dogs at all,” Bowman said.

Bowman told FOX 11 she had always wanted a dog, and when her dad finally said yes, she used her first work paycheck to help pay for one.

She found one of Hinojosa’s online puppy ads on Recycler. Emails Bowman provided show that Hinojosa was using the fake name “Priscilla” at the time. 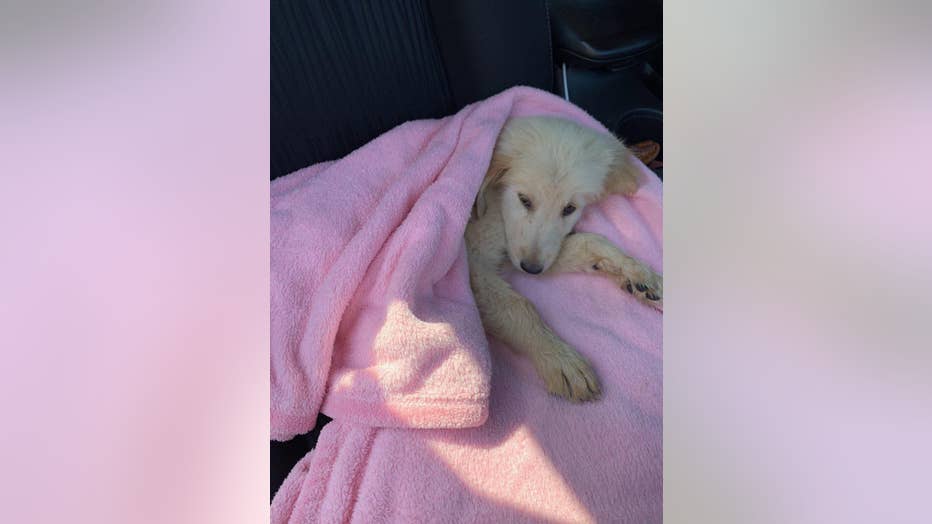 Bowman ended up meeting Hinojosa at a Covina park, and bought a maltipoo puppy for $600 she named Olive.

But within days, Bowman says Olive became lethargic, and started throwing up late at night, and after a trip to the vet, she tested extremely positive for the deadly canine parvovirus.“They said she was very tiny so it was probably going to be very fatal,” Bowman said.

Tragically, it was. Despite medicine, and emptying out the wallet for Olive’s vet bills, she began having seizures, and died on Bowman’s bed just one week after being sold. “I knew she didn’t feel good and she was suffering and I just felt bad for her because we couldn’t help her,” Bowman said as tears streamed down her face.

“She told me she would send me pics of the puppies parents, she never did,” said Carmen

Lopez told FOX 11 that after texting back and forth with Rodriguez in response to an online ad in October, she and her brother later met Hinojosa in an El Monte parking lot, where they bought Cosita and Ace for a package deal of $1,000.

“They were just sick from the get go,” Lopez said. 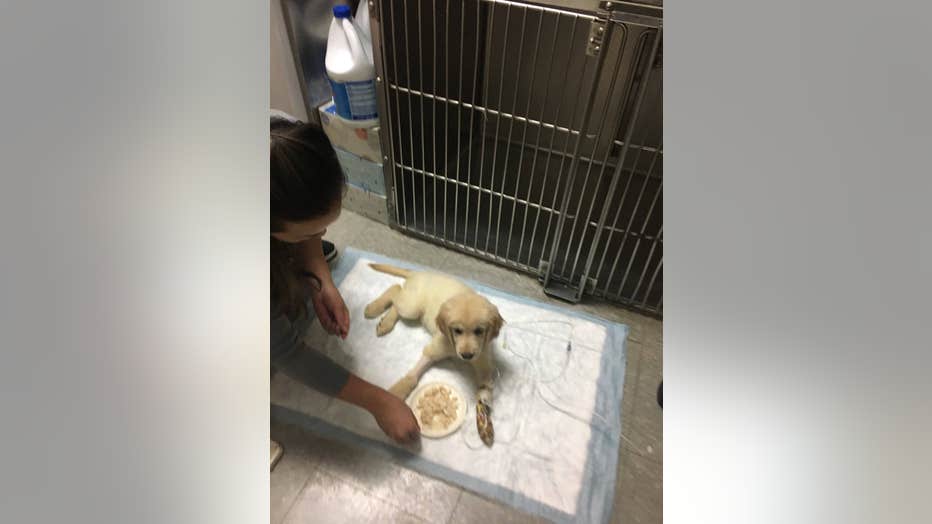 Ace had the same symptoms, and both puppies were taken to the vet.

“They [said] they were too little, they shouldn’t have left the parents they had, they had heart problems, both of them, they were having seizures, and they were just very malnourished,” Lopez said.

Cosita ended up passing away, despite Lopez’s attempts to nurse her back to health.

“I go home and she’s just there dead,” Lopez said. “She was full of foam, I just picked her up, I wanted to hug her, I was crying.”

Ace also ended up passing away.

Juarez told FOX 11 her boyfriend met Hinojosa at an In n Out parking lot in Ontario where he bought her a golden retriever puppy for $600.

“When he took him to the vet they tested him for parvo and he tested positive,” Juarez said. Furious, Juarez and her boyfriend’s family set up a sting on Hinojosa, who showed up at a parking lot with another golden retriever puppy, thinking she was making another sale.

“You know what, I’m not a vet but this other puppy is in danger,” a woman says to Hinojosa. “He’s skinny, this puppy needs care.”

“No, I can show you vet records,” Hinojosa replies.

Hinojosa then tries to take the puppy out of Juarez’s arms but is denied, and drives away, leaving the puppy behind.

The puppy had a severe bacterial infection on its groin area, and it also ended up testing positive for parvo.

Heartbreaking video provided by Juarez shows the puppy repeatedly trying to vomit, but there was nothing left in its little stomach.

“I tried to keep him hydrated with pedialyte but he kept throwing it up,” Juarez said. The puppy died, just three days later.Weeks later, in mid November, FOX 11 saw one of the women’s ads posted online on Geebo.

We responded as interested buyers, and the women agreed to meet us at a Starbucks parking lot in Fontana.

Hinojosa and Rodriguez gave us the fake name “Ingrid”, and they showed up in a white Mercedes with two maltipoo puppies they thought they would be selling us.

Rodriguez admits on camera that the puppies she’s trying to sell are only 7 weeks old, and because they are too young, they haven’t had their vaccinations yet.

“We were gonna do shots but they told us to do them at 8 weeks,” Rodriguez said.

After Rodriguez blatantly admitted to breaking the law, FOX 11 reporter Bill Melugin moved in to confront her on camera.

“How’s it going? My name is Bill Melugin, I’m a reporter with FOX LA, do you know why we’re here today?” Melugin said.

Rodriguez quickly picks up the puppies, gets into the car, and drives away as Hinojosa can be seen in the passenger seat covering up her face.

Victims were furious when we showed them video of the confrontation.

“It’s very frustrating, like dude you would think you’d learn from the first time but she’s over here doing it again,” Lopez said.“I’m so angry, like why are they still doing it?” Juarez said.

Less than an hour after the FOX 11 confrontation, animal control showed up at the Fontana home that Hinojosa and Rodriguez live at.

Nobody answered the door, so officers left an urgent notice of possible violations at the door.

Now, victims of these accused sick puppy peddlers are out hundreds, even thousands of dollars in vet bills, but even more importantly, they’ve all lost a piece of their hearts, and they want justice.

“They should both get some jail time, because it’s unfair and inhumane,” Juarez said.

Fontana police confirmed that the women never responded to the notice left at their door.

Law enforcement confirms they are aware of the allegations.

“We are aware of an ongoing investigation and cannot comment at this time.”