Timelapse footage shot in Rhode Island showed the almost-full moon setting on February 26, 2021, as it changed from orange to pink behind Newport Bridge. (Credit: Mike Cohea via Storyful)

Look up to the sky this week as February’s full moon — dubbed the "snow moon" — makes its appearance.

As a bonus, the full moon will appear low on the west-northwestern horizon near Regulus, one of the brightest stars in the night sky. Regulus is the brightest star seen in the constellation Leo, which is typically best seen in the Northern Hemisphere's late winter and spring, according to the space agency.

February’s snow moon reaches peak illumination at 11:59 a.m. ET on Wednesday, Feb. 16, according to the Farmer’s Almanac. But the best time to view it will be later in the evening.

However, visibility on Wednesday evening could be restricted for many areas of the country due to a major storm system moving through the nation’s heartland. The only regions where cloud cover is not expected to be an issue are in the Deep South and west of the Rockies, according to FOX Weather, which noted how this will be the last full moon of meteorological winter.

For those who don’t get a good view of the moon on Wednesday, NASA says the moon should be bright enough to appear full through Thursday evening. 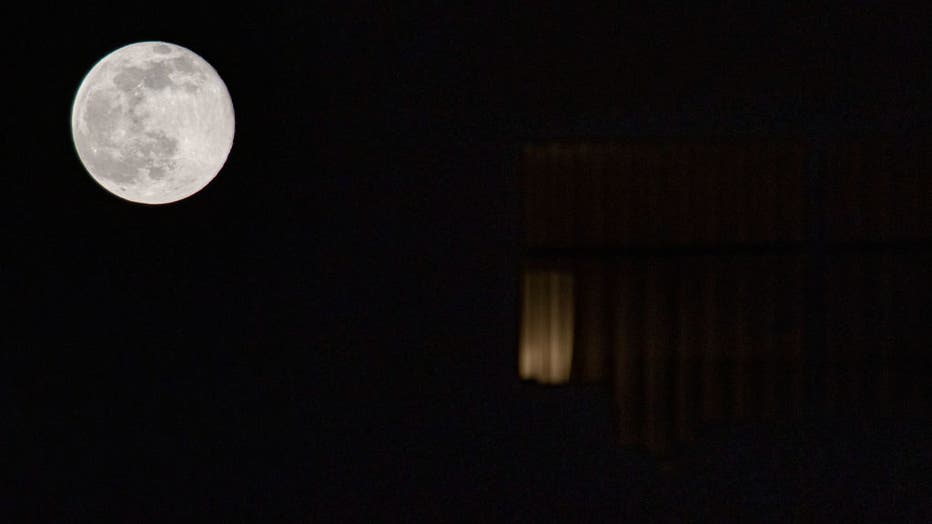 FILE - Snow Moon of February 2021. The full moon of earth natural satellite as seen illuminating the lunar light in the night sky from Eindhoven, Netherlands, on Feb. 27, 2021 (Photo by Nicolas Economou/NurPhoto via Getty Images)

February’s full moon 2022: Why is it called the snow moon?

The full moon names come from a number of places, including Native American, Colonial American and European sources, the Farmer’s Almanac says.

February’s full moon name is known as the snow moon due to the typically heavy snowfall that happens in February — noting how the month is the country’s snowiest.

"In the 1760s, Captain Jonathan Carver, who had visited with the Naudowessie (Dakota), wrote that the name used for this period was the Snow Moon, because more snow commonly falls during this month than any other in the winter,‘" the Farmer’s Almanac says.

Other names for February’s full moon have included the bald eagle moon or eagle moon, traditionally referred to as this by the Cree. The Dakota also call this the raccoon moon, certain Algonquin peoples named it the groundhog moon, and the Haida named it goose moon, Farmer’s Almanac says.

The moon will reach peak illumination at 3:20 a.m. ET, Farmer’s Almanac says — noting how skygazers should look for the spectacularly bright moon as it rises above the horizon that evening.