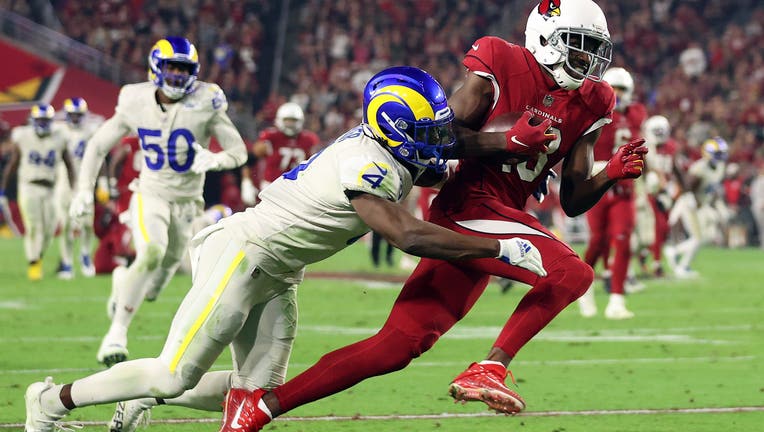 GLENDALE, ARIZONA - DECEMBER 13: A.J. Green #18 of the Arizona Cardinals carries the ball after a reception as Jordan Fuller #4 of the Los Angeles Rams defends during the fourth quarter at State Farm Stadium on December 13, 2021 in Glendale, Arizona.

GLENDALE, Ariz. (AP) — Matthew Stafford threw for 287 yards and three touchdowns, Cooper Kupp and Odell Beckham Jr. each caught a touchdown pass and the Los Angeles Rams held on for a 30-23 win over the Arizona Cardinals on Monday night.

The Cardinals (10-3) will have to wait at least one more week before clinching their first playoff spot since 2015. Kyler Murray threw two interceptions that led to Rams touchdowns.

The Rams (9-4), who won their second straight and pulled within one game of the Cardinals in the NFC West, look rejuvenated following a three-game losing streak in November.

Kupp had 13 catches for 123 yards, the eighth 100-yard game this season for the NFL’s receiving leader.

The Cardinals had a chance to tie the game in the final seconds after recovering an onside kick. But a holding call wiped out a long Murray run on the first play of the drive and Arizona couldn’t produce a last-second miracle.

Stafford — who had plenty of protection and time to throw most of the night — hit Van Jefferson on a high-arching pass for a 52-yard touchdown to push the Rams ahead 20-13 early in the third quarter. The veteran quarterback dissected a Cardinals defense that had been among the best against the pass in the NFL this season.

A few plays later, Murray was picked off for the second time by Leonard Floyd, who tipped the ball into the air, caught it and then rumbled downfield to the Arizona 19. Seven plays later, Stafford hit a diving Kupp for a 4-yard touchdown and the Rams led 27-13.

James Conner bulldozed through the Rams’ defense for an 8-yard touchdown early in the fourth quarter to cut the deficit to 27-20.

Murray finished with 383 yards passing as the Cardinals tried to catch up late.

Arizona’s Matt Prater made his second 53-yard field goal of the first half — moments after Murray scrambled for 16 yards and got out of bounds with 1 second left — to tie the game 13-all at halftime. The six-play, 35-second drive ended a back-and-forth first half that saw both teams take the lead and then lose it.

Prater opened the scoring with his first 53-yard kick. Arizona was threatening to score again later in the first quarter, but Murray was picked off by Ernest Jones on second-and-goal from the 4 after Aaron Donald deflected the pass.

Donald — a six-time All-Pro — had a big first quarter that also included a sack, a tackle for loss and a quarterback hurry. He finished with three sacks, bringing his total to 10 this season.

The Rams converted the interception into a touchdown when Stafford found Beckham for a 2-yard score. Stafford completed all seven of his passes on the drive.

It was Beckham’s third touchdown since joining the Rams last month. He did not have a touchdown in six games with Cleveland this season. It was also the first time he’s scored touchdowns in three straight games since 2015.

NOSE FOR THE END ZONE

Arizona’s Conner scored from 1 yard out late in the second quarter to tie the game at 10-all, bursting into the end zone on a second effort after bouncing off a pile. Connor has scored a touchdown in seven straight games, tying a franchise record set by John David Crow in 1960.

The Rams played without defensive back Jalen Ramsey and tight end Tyler Higbee, who were both put on the COVID-19 list earlier Monday. It was the first game both players have missed this season.

Ramsey came into Monday leading the team with three interceptions. Higbee has 44 receptions for 395 yards and three touchdowns.

The Cardinals are 7-0 away from home but 3-3 at State Farm Stadium.

LA’s Andrew Whitworth made NFL history by becoming the first player to start a game at left tackle at age 40.

Rams: LA welcomed back linebacker Justin Hollins, who had missed nine games because of injury.

Cardinals: At Detroit on Sunday.