At the Arizona State Capitol on Wednesday, a bill signing that's been a long time coming for Valley families who've had to deal with the loss of a child to suicide took place. FOX 10's Matt Galka reports.

PHOENIX - At the Arizona State Capitol on Wednesday, a bill signing that's been a long time coming for Valley families who've had to deal with the loss of a child to suicide took place.

Soon, Arizona schools will have to provide suicide prevention training to teachers and staff, under the new Mitch Warnock Act. The act was named for a Tempe student who took his own life in 2016. While the act went into effect on August 27, the ceremonial bill signing still meant a lot to Mitch's family.

Mitch was a student at Tempe's Corona Del Sol High School. Since his death, Mitch's father, Tim Warnock, has been fighting for more resources in schools to spot the warning signs.

"I felt like Mitch was honored," said Tim. "I felt like his spirit of wanting to defend vulnerable kids in some way has come to fruition."

The road led to unanimous passage in the State Legislature this year of a bill requires all schools to train teachers and staff in suicide prevention, an issue pushed hard by Democratic Senator Sean Bowie.

"It's being implemented at the local level," said State Sen. Bowie, who represents the Ahwatukee area. "I'm visiting a lot of my schools and talking to counselors and principals about social-emotional wellness, about how important this training will be for our teachers and support staff."

Governor Doug Ducey said the youth suicide problem in Arizona was enough to call it an epidemic.

"Kids have to have a safe space where they can talk to someone, where we can remove this stigma of sharing if you're down or depressed or considering this type of action," said gov. Ducey.

While there were far too many parents standing around Gov. Ducey Wednesday who have had to go through tragedy, many were hopeful the bill could reduce the number of parents who have to grieve in the future.

While the mandate is set to go into effect in fall 2020, some schools have already started the training. 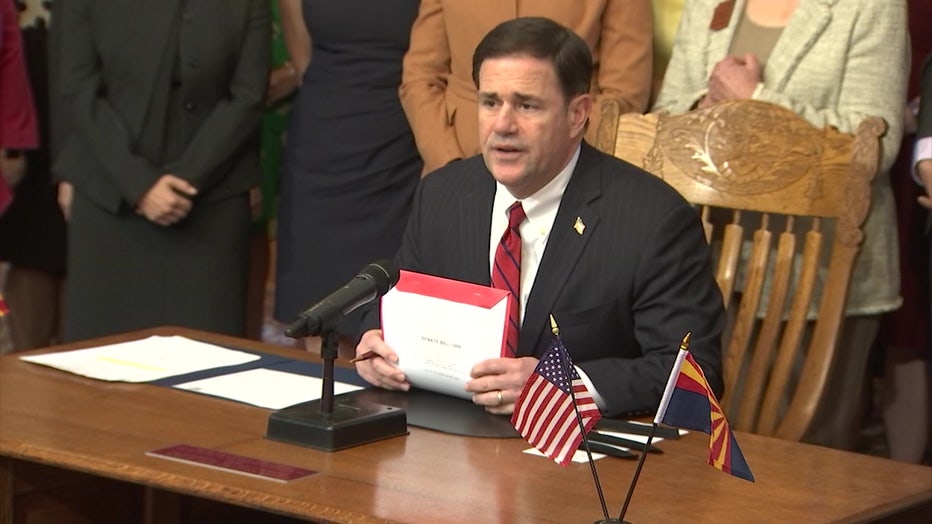