The 26-foot high construction was originally erected last year in the small northeastern village of Selo.

LJUBLJANA, Slovenia (Fox News) - A wooden statue mocking President Trump as a two-faced "vampire" was torched by suspected vandals Thursday in Slovenia, the homeland of his wife Melania.

The 26-foot high construction was originally erected last year in the small northeastern village of Selo to act as a criticism of populist politics. Its creator, Tomaz Schlegl, named it “statue of liberty,” AFP reported.

It showed Trump with his trademark hairstyle, blue suit, and a long red tie. His right arm — fist clenched — was raised high like that of America's Statue of Liberty. A mechanism inside the statue opened its red-painted mouth to reveal a set of sharpened teeth.

“Like all populists, the statue has two faces,” Schlegl said when he unveiled the statue last August. “One is humane and nice, the other is that of a vampire.”

The construction, however, left some villagers unhappy. It had to be moved to another village in the area after residents of Selo vowed to burn it to the ground on Halloween last October.

Milan Balazic, the mayor of Moravče where the statue ended up, said unknown arsonists burned it. Slovenian police are searching for the suspects.

Balazic said the torching of the statue "is a symbol of intolerance toward artistic projects in our society." 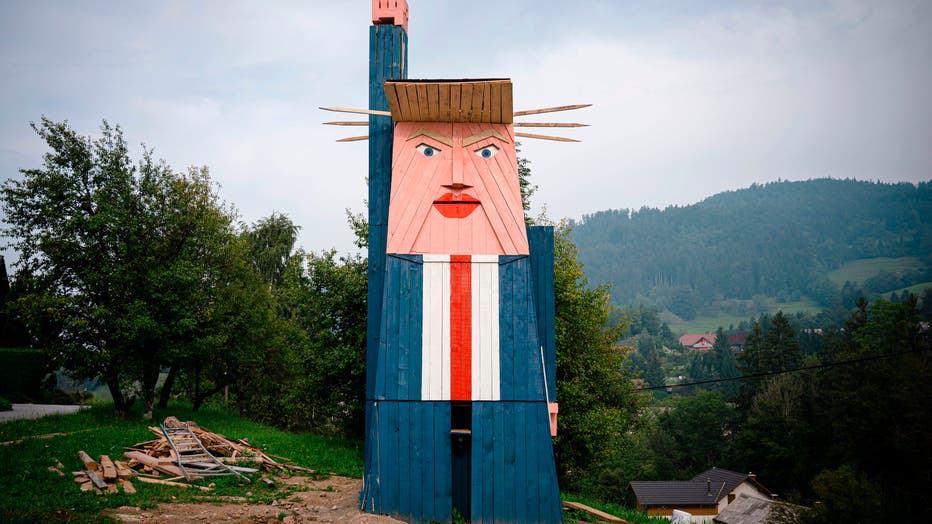 FILE - A wooden structure made to resemble US President Donald Trump is constructed in the village of Sela pri Kamniku, about 20 miles northeast of Ljubljana in Slovenia, the home country of Trump's wife on August 28, 2019. (JURE MAKOVEC/AFP via Getty Images)

The structure had previously been defaced with a Hitler mustache after it was unveiled in Moravče, Total Slovenia News reported.

Trump isn’t the only member of his family to have their likeness immortalized in Slovenia.

A life-size sculpture of First Lady Melania Trump, born Melanija Knavs, was carved from the trunk of a linden tree in her hometown of Sevnica last June. Its appearance also received a mixed reaction from locals, with some saying it looked more like a "scarecrow."