CHICAGO - Welcome to The Big Recap of The Big Leap! I’m TV critic Allison Shoemaker, and I’ll be here every week talking about the twists and pirouettes (it’s a dance joke — get it?) in FOX’s exciting new series about second chances and the big bad world of reality television.

(This is the point at which I point out the obvious: "The Big Leap" airs on FOX, this station is also owned by FOX, and I work for FOX. I would dig this show even if I weren’t watching it for work, but consider this disclosure disclosed.)

Above you’ll find my interview with Teri Polo, who plays momfluencer and former dancer Julia. Julia joins "The Big Leap" (the show-within-the-show) at a difficult time in her life, with the existing gap between herself and her husband growing even wider, exacerbated by her decision to appear on the show. (The field trip to the computer store also probably didn’t help.)

But what went on in "Classic Tragic Love Triangle"? Well, a lot. Let’s start with our heroine. 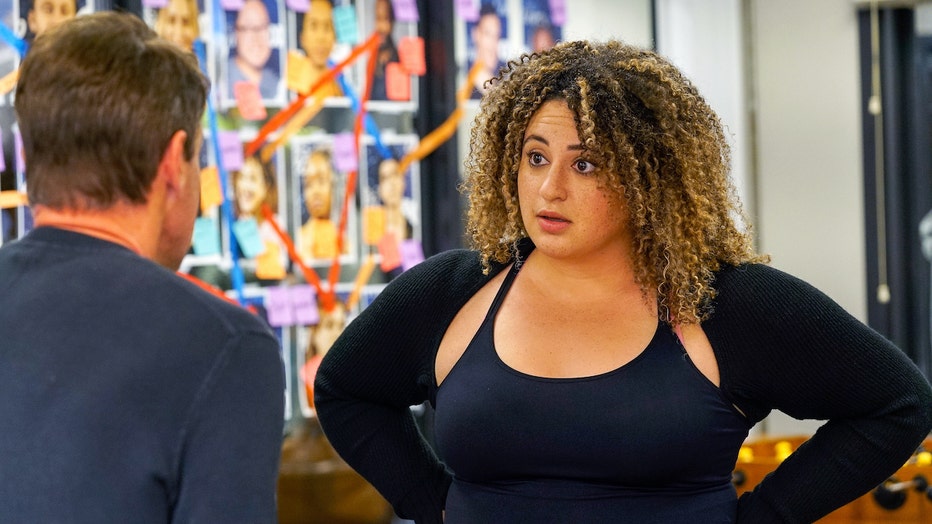 Okay, they’re all our heroines (yes, even Brittney — you just know her backstory is going to be rough). But Gabby (Simone Recasner) rules. Last week, Reggie (Ser'Darius Blain) got under Gabby's skin when he, as she puts it, "moved my hair out my face, told me I was pretty and lifted me over his head." And as we saw, Nick (that dastardly Scott Foley) picked up on the chemistry between the two right away.

But Gabby’s a smart lady, and when Nick rearranges some things to ensure that Gabby’s dancing in a trio with Reggie and Brittney (Anna Grace Barlow) for the show’s auditions, she smells trouble. (Brittney’s callous antagonism makes it pretty obvious.) Her hunch is confirmed pretty much immediately when Jessica (McKenzie Chinn) and another member of the production team wander into the bathroom while she’s in a stall. Turns out they’re calling Brittney and Gabby "the flute and the tuba" and the first person to figure out who fathered Gabby’s adorable kid gets a bonus.

As you might guess, she doesn’t love that! But Nick, that cad, puts it to her straight: audiences are going to love her and root for her and she should embrace it, and also she signed a 20-page contract so she’s got no say in the matter. Oh, and one more thing: Reggie seems to be making "googly eyes" at her, too. 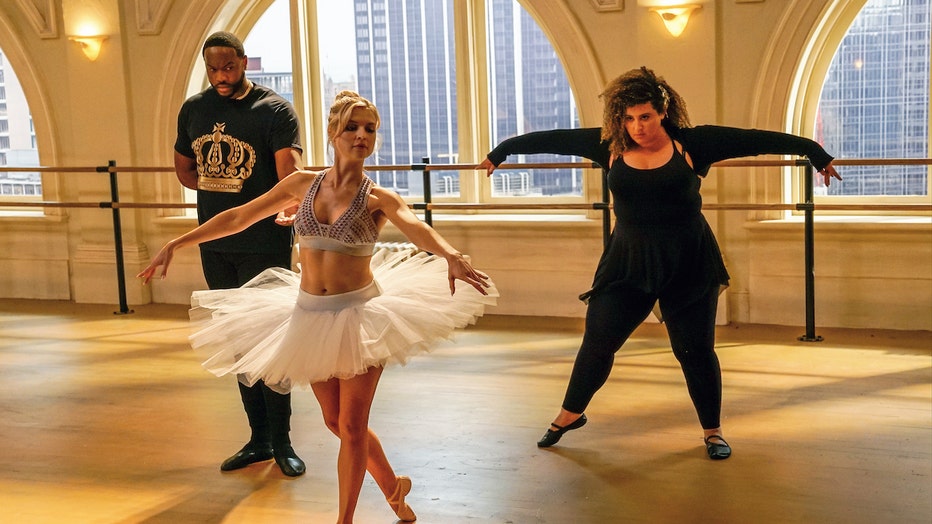 That seems to be confirmed when Reggie invites Gabby to his trailer, in which he "eats chocolate and drinks $10 coconut water." Then he asks her to get dinner later in the week. The googly eyes, they’re real!

But the next morning, she shows up to that same trailer with smoothies in hand and spies Reggie getting what we’ll call a nice morning pick-me-up from Brittney. And once again, Nick, the cad, swoops in with some hard truths and light (or not-so-light) emotional manipulation. If Gabby wants the part, she should fight for the part, and start thinking about revenge in her life — including revenge on whoever told her she wasn’t sexy. He’s an unlikely source for a pep talk, but it seems to do the trick, and Gabby’s audition is G-R-E-A-T.

So naturally, she’s cast as the understudy — for all the roles. You can just picture the social media reactions when "The Big Leap" finally makes it to air, right? The outrage? Yeah, it sucks, but once again that scoundrel Nick is at least a little bit right: everyone loves an underdog. 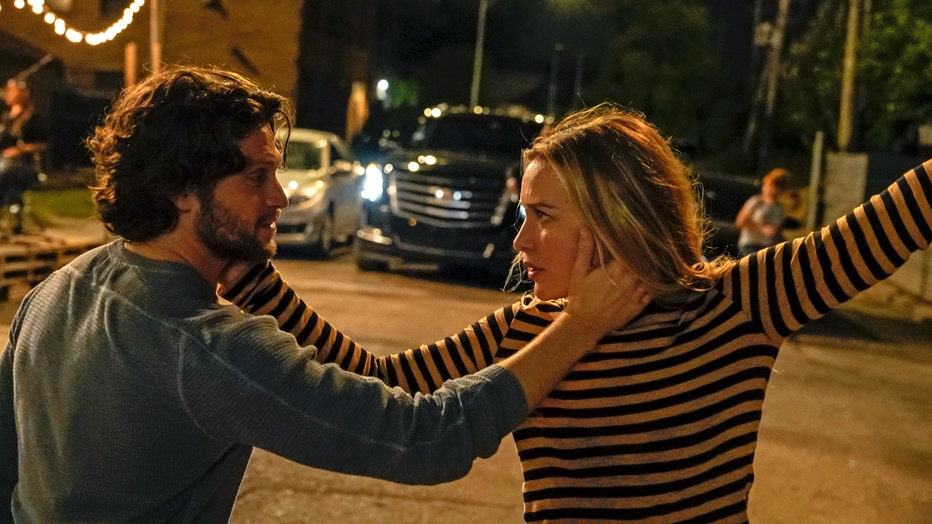 No wonder Mike’s loyal drinking buddies are so frustrated with him: the man cannot help himself. Nick, the rascal, already picked up on the faint sparks flying between Mike (Jon Rudnitsky) and Paula (Piper Perabo), and figured out something they have yet to realize: that Paula, in essence, cost Mike his job in the auto industry. But things get more complicated when our dude refuses to dance with Paula, his "Black Swan," because he doesn’t want any part of a story in which his character cheats on his beloved. The floppy-haired gentleman doth protest too much.

And because that’s not obvious enough, he absolutely flips when that sly dog Nick asks him if there was a third party involved in the dissolution of his marriage. So our resident nogoodnik Nick (teehee, nogoodnik Nick) tells the crew to take off Mike’s mic (tee-hee, Mike’s mic) and then draws the confession out: Yes, Mike cheated on his wife with a coworker, and she doesn’t know and would never forgive him if she ever found out, so it can’t be on TV. And he says all of this, and I cannot stress this enough, in front of a camera and beneath a boom mic. Mike, you sweet dum-dum!

So Paula takes matters into her own hands and shows up at his local bar to make him dance with her. It’s adorable, and he’s a mess.

Julia: Trouble at home and on the show, but wow, can she dance 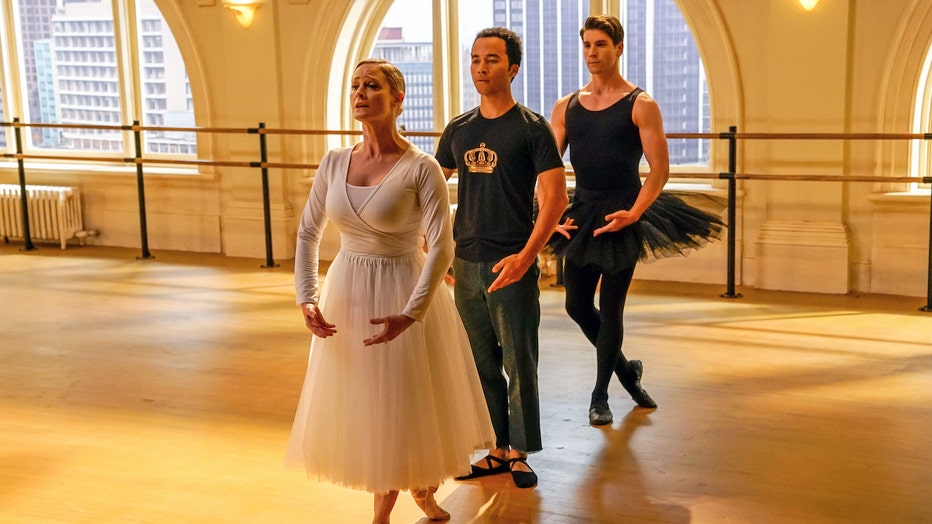 No one on this show is having an easy time of it (except maybe Wayne, who seems both lovely and above the gray), but Julia might have it the worst. After confronting her husband about his adult binge-watching habits, she tells him she’s going to do the show, much to his frustration; when the crew arrives to shoot footage for her background package, he walks out and tells her he’s leaving to stay in a hotel. (The crew gets the audio of their argument by hiding in the bathroom, obviously.)

Then she angers the other women in the cast by telling Raven (Karen Rodriguez) that sex work is "bad for women and bad for families," essentially making herself an outcast by being, it must be said, kind of a hypocrite. But that’s understandable! She’s in a really rough spot!

Luckily, Wayne (Kevin Daniels) talks to her alone and offers comfort, wisdom, and some spot-on ballet teaching, and Julia’s emotional audition earns her the role of the Queen — alongside Raven, who, in the episode’s final moments, Julia discovers to be the face behind "My Kind of Pie," the site Julia’s husband has been pouring money into for ages.

O. U. C. H. That’s rough. But Teri Polo made me teary, so Julia still comes out on top in this critic’s book. (But she needs to be chill with Raven! It’s not Raven’s fault that Julia’s husband sucks!)

Nick: the rascal gets a taste of his own medicine 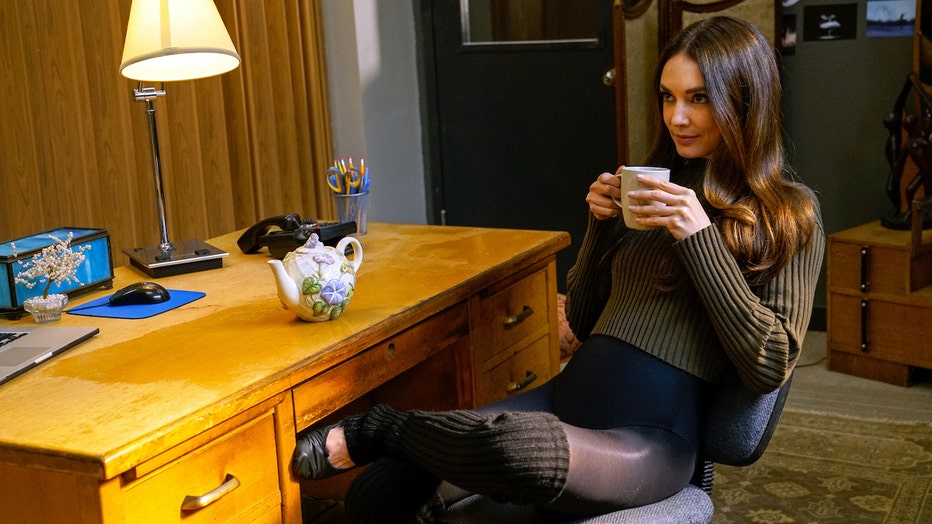 Oh, and Nick sleeps with Monica (Mallory Jansen, who is amazing and terrifying in this role) while footage of Monica throwing a chair at Justin for spinning on his head instead of doing a traditional pirouette plays in the background. (Bless this show.) Monica then promptly uses that to her advantage and wrests some creative control for herself before laying out some ground rules: It’s not a one-time thing but it’s also not forever and she gets to dictate the terms; he never initiates and she never gives him her phone number; and oh, by the way, she likes it when he pulls her hair.

I bet that’s going to go great for everyone.

All in all, it’s another solid episode with great moments for pretty much everyone, from the meter maid and Gabby’s enthusiastic neighbor to our lead. Next week’s episode can’t pirouette here fast enough.