GENEVA (AP) - The physics lab that’s home to the world’s largest atom smasher announced on Tuesday the observation of three new "exotic particles" that could provide clues about the force that binds subatomic particles together.

The observation of a new type of pentaquark and the first duo of tetraquarks at CERN, the Geneva-area home to the Large Hadron Collider, offers a new angle to assess the "strong force" that holds together the nuclei of atoms.

Most exotic hadrons, which are subatomic particles, are made up of two or three elemental particles known as quarks. The strong force is one of four forces known in the universe, along with the "weak force" — which applies to the decay of particles — as well as the electromagnetic force and gravity.

The announcement comes amid a flurry of activity this week at CERN: Also Tuesday, the LHC’s underground ring of superconducting magnets that propel infinitesimal particles along a 27-kilometer (about 17-mile) circuit and at near light speed, began smashing them together again. Data from the collisions is snapped up by high-tech detectors along the circular path. 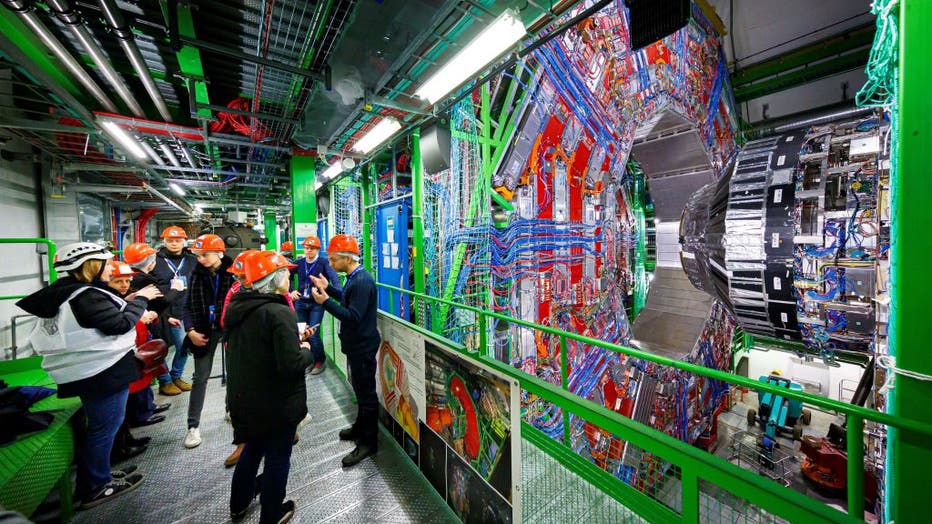 Members of the media receive explanations nexto to the Compact Muon Solenoid (CMS) detector assembly in a tunnel of the Large Hadron Collider (LHC) at the European Organisation for Nuclear Research (CERN), during maintenance works on February 6, 2020

The so-called "Run 3" of collisions, ending a three-year pause for maintenance and other checks, is operating at an unprecedented energy of 13.6 trillion electronvolts, which will offer the prospect of new discoveries in particle physics.

CERN scientists hailed a smooth start to what is expected to be nearly four years of operation in "Run 3" — the third time the LHC has carried out collisions since its debut in 2008.

A day earlier, CERN celebrated the 10-year anniversary of the confirmation of the Higgs boson, the subatomic particle that has a central place in the so-called Standard Model that explains the basics of particle physics.