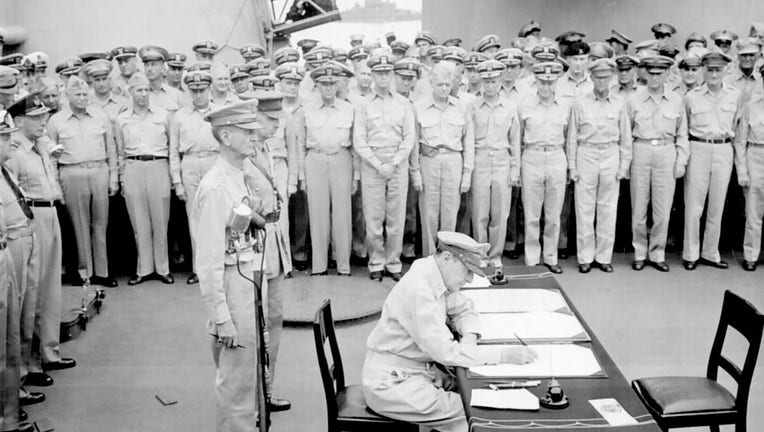 The horrific human atrocity of World War II ended aboard the USS Missouri in Tokyo Bay as Japan formally signed documents of surrender on this day in history, Sept. 2, 1945.

Yet it ended more than a total decade of devastating global conflict that killed 60 million people or more in Asia, Europe and Africa, and in other battles fought on land, air and sea around the world.

ON THIS DAY IN HISTORY, SEPT. 1, 1864, ATLANTA COLLAPSES AND BURNS AS CONFEDERATES FLEE

"Today, the guns are silent. A great tragedy has ended. A great victory has been won," U.S. Gen. Douglas MacArthur said in an international radio address while officiating during the ceremonies aboard the American battleship.

"Today, freedom is on the offensive, democracy is on the march," he said. "Today, in Asia as well as in Europe, unshackled peoples are tasting the full sweetness of liberty, the relief from fear."

Sailors packed every inch of the USS Missouri and hung from each deck to witness the long-awaited end of the war.

The Allies flooded Tokyo Bay with warships while a massive air armada flew overhead in a final show of military and industrial might to reinforce that surrender was Japan's only option.

"Freedom is on the offensive, democracy is on the march."

The war in Asia began in 1931 when Imperial Japan invaded and occupied Manchuria, now the northeastern corner of the People's Republic of China.

Japan invaded mainland China in 1937 — and would soon conquer much of Asia. 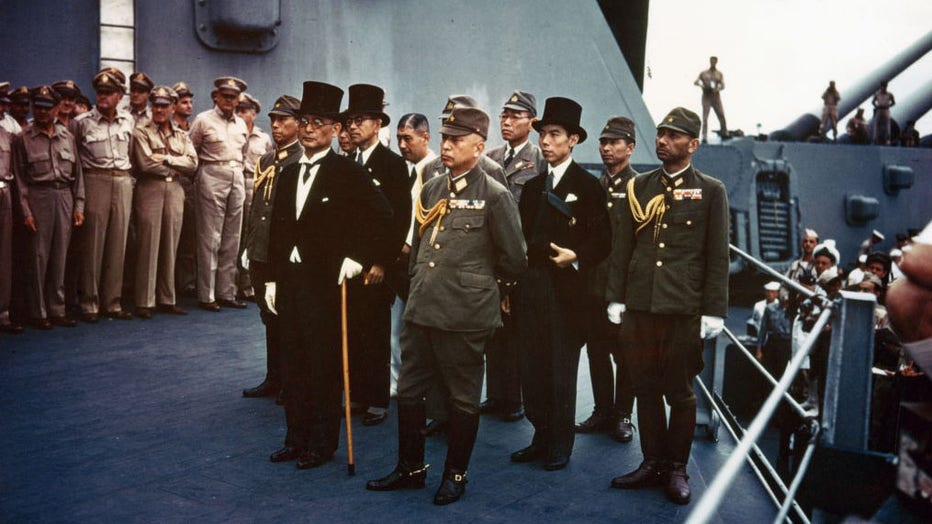 Surrender of Japan, Tokyo Bay, 2 September 1945: Representatives of the Empire of Japan on board USS Missouri, during the surrender ceremonies. (Photo by: Universal History Archive/Universal Images Group via Getty Images)

The Philippines, Korea, Malaysia, Singapore, Taiwan, Thailand, Burma and French Indochina (Cambodia, Laos, Vietnam) were among the nations conquered and occupied by Japan during the war and then liberated by the U.S. and Allies from 1942 to 1945.

INGRAHAM: BIDEN'S ‘FRAUDS AND GENERALS’ ARE SYCOPHANTS: ‘MACARTHUR AND EISENHOWER WOULDN’T PUT UP WITH THEM

China suffered miserably through the war — with as many as 20 million people killed by conflict, Japanese atrocities, enslavement and widespread starvation and hardship.

The war turned global on Sept. 1, 1939, when Germany invaded Poland, igniting six years of conflict in Europe, Africa and the Middle East.

Emperor Hirohito announced the surrender of Japan on Aug. 15, 1945, in the wake of the atomic bombings of Hiroshima and Nagasaki on Aug. 6 and Aug. 9, respectively.

It was the first time the emperor spoke directly to his subjects.

Foreign Minister Mamoru Shigemitsu and General Yoshijirō Umezu signed the Instrument of Surrender on behalf of Japan and its army.

MacArthur marked the historic moment by signing the documents with six pens. 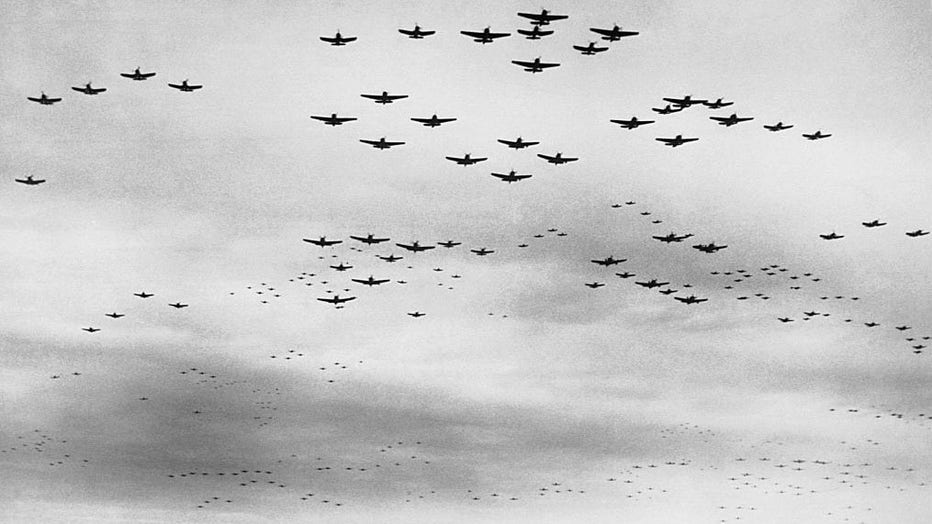 American fighter planes fly in formation over the USS Missouri in Tokyo Bay on September 2, 1945, during the ceremony in which Japan signed terms of unconditional surrender to the Allies. (Photo by CORBIS/Corbis via Getty Images)

He gave one each to American POW Lt. Gen. Jonathan Wainwright, who oversaw the surrender of U.S. forces in the Philippines in 1942; and to U.K. Lt. Gen. Arthur E. Percival, who led British forces in the Malay Peninsula and Singapore when they surrendered to Japan, also in 1942.

ON THIS DAY IN HISTORY, AUG. 17, 1943, PATTON BEATS MONTY TO MESSINA, LIBERATES SICILY 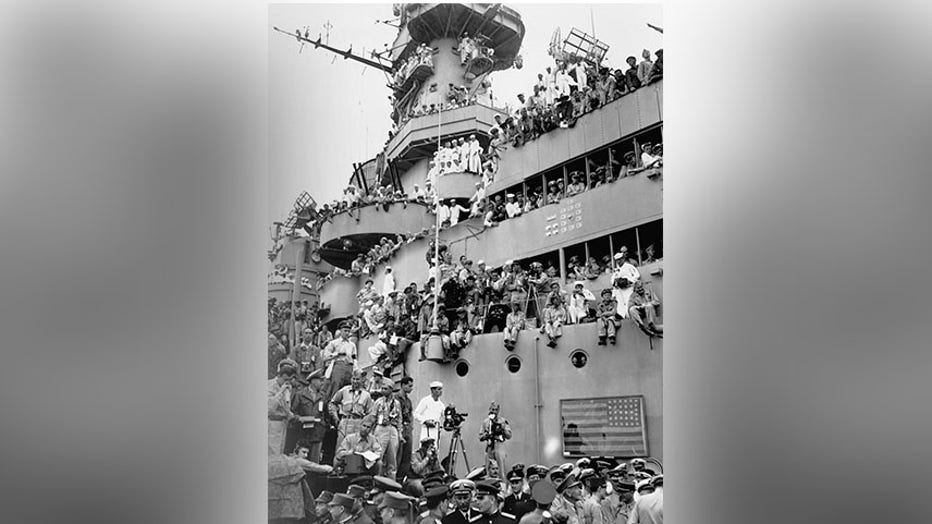 Spectators and photographers pick vantage spots on the deck of the USSMissouriin Toyko Bay, to witness the formal Japanese surrender proceedings. September 2, 1945. (Photo by CORBIS/Corbis via Getty Images)

The USS Missouri was given the historic duty of hosting the surrender ceremony in tribute to President Harry S. Truman.

The Show Me State native had become president by succession only in April of that year, following the death of Franklin D. Roosevelt.

The USS Missouri today still serves the country today in Pearl Harbor, Hawaii, where she is the centerpiece of the Battleship Missouri Memorial.

"The holy mission has been completed."

"The skies no longer rain death — the seas bear only commerce; men everywhere walk upright in the sunlight," MacArthur said on Sept. 2, 1945.

The general led the occupation of Japan until 1951, with Emperor Hirohito remaining on his throne as a symbolic gesture.

"The entire world is quietly at peace," MacArthur said.

"The holy mission has been completed."