Democratic candidates square off in 5th debate in Atlanta

Wednesday's debate, like those before it, prominently featured squabbles over Medicare For All, but candidates began the debate by agreeing across the board that President Donald Trump should be impeached.

ATLANTA - The fifth Democratic debate is underway with 10 candidates lined up next to each other onstage in Atlanta on Wednesday, with the impeachment inquiry into President Donald Trump leading off the discussion.

Warren slammed money in politics, saying that ambassadorships should not be for sale.

She was referring to current E.U. Ambassador Gordon Sondland, who donated $1 million to Trump's inauguration. Sondland testified before Congress on Wednesday.

Minnesota Sen. Amy Klobuchar said Trump “puts his own private interests” ahead of the country’s and “this is wrong.”

Vermont Sen. Bernie Sanders said that Trump is the most corrupt president in modern history. "We simply cannot be consumed by Donald Trump" or the Democratic Party will lose the election, Sanders said.

He said Democrats instead should focus on the needs of working people.

Indiana mayor Pete Buttigieg said that "we are absolutely going to confront this president" over his conduct.

Buttigieg’s rise in the primary makes him a prime target as the four candidates now bunched at the top seek to distinguish themselves with less than three months until voting begins.

The 37-year-old mayor of South Bend, Indiana, has gained significant ground in recent months in Iowa, which holds the nation’s first caucuses on Feb. 3. He was asked early about how being mayor of a city of 100,000 residents qualified him for the White House and said he was more than up to the challenge.

"I know that from the perspective of Washington, what goes on in my city might look small,” he said. “But frankly, where we live, the infighting on Capitol Hill is what looks small."

The discussion transitioned into taxing the wealthy and health care.

Booker said Warren’s proposal “is cumbersome,” has failed in other countries and would stunt economic growth in blighted urban areas.

Warren has proposed raising taxes by 2 cents on income over $50 million to finance a host of programs including universal preschool and higher teacher pay. 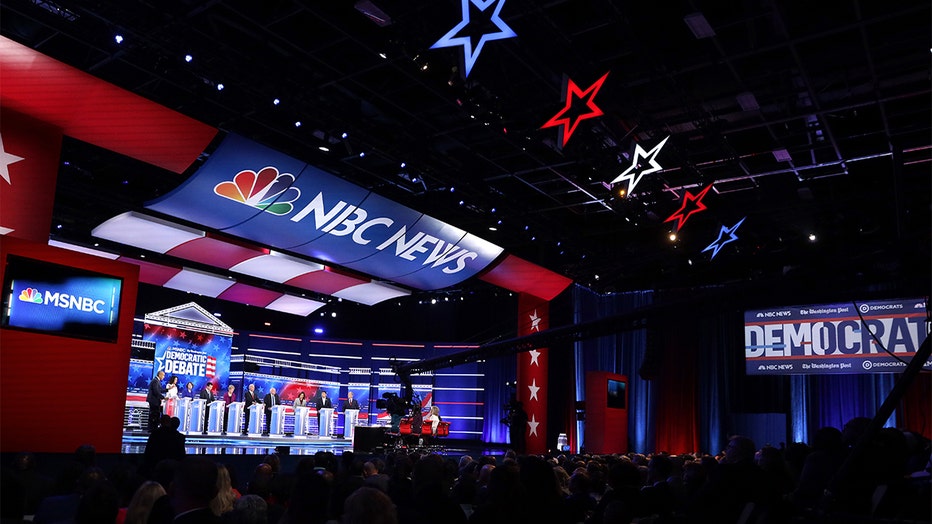 Warren, who has come under attack recently for the proposal, called her policy “transformative.”

Former Vice President Joe Biden is continuing to push for modifications to Obama-era health care reforms over the holistic “Medicare for all” proposals from two of his Democratic presidential rivals.

Biden argued that voters are hesitant to make the transformative, government-backed changes pushed by candidates including Bernie Sanders and Elizabeth Warren.

Biden said he doesn’t want to force anyone to give up private health insurance.

Warren said that she wants to “bring as many people in and get as much help to the American people as fast as we can.”

"I think that it's unfortunate that we have someone on the stage who is attempting to be the Democratic nominee for the president of the United States who, during the Obama administration, spent four years full time on Fox News criticizing President Obama,” Harris said.

Klobuchar said that having the nation’s first female president was well overdue, adding of the House speaker: “If you think a woman can't beat Donald Trump, Nancy Pelosi does it every single day.”

Klobuchar repeated her argument that, were Buttigieg a woman, he would not be on the debate stage as a top-tier candidate for president.

Klobuchar has been arguing that her trove of passed legislation is proof of pragmatism, and victory in conservative parts of Minnesota proof she can beat President Donald Trump.

She said, “What I said is true,” adding, “Otherwise, we could play a game called name your favorite woman president.”

Harris said she has crafted her plans for paid family leave around what she characterizes as a campaign-wide position on policies to help elevate women.

The California senator said that much of the “burden” of raising children and caring for aging parents falls to women, whom she noted are “not paid equally for equal work in America.”

Harris’ plan would provide leave for up to six months, a timeframe she said was selected in part due to women having children later in life than in previous generations. 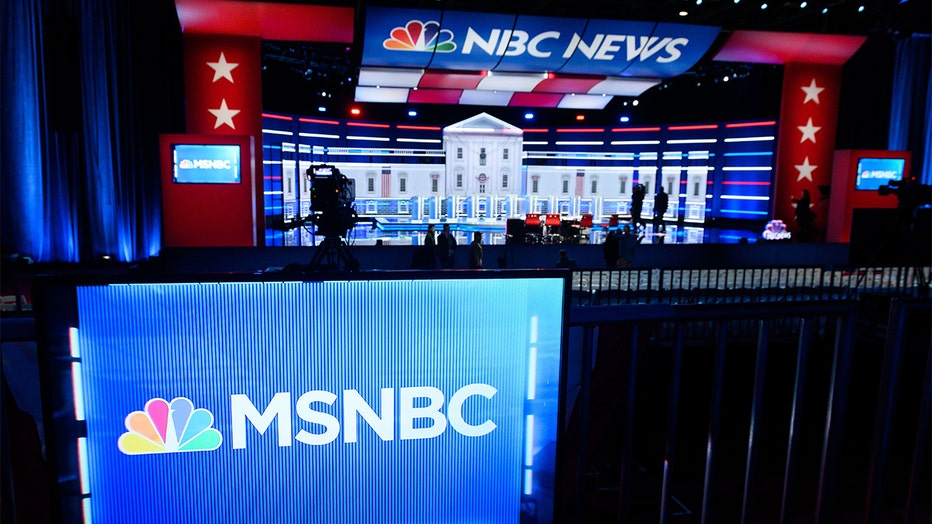 The debate stage is prepared for the upcoming Democratic Presidential Debate hosted by MSNBC and The Washington Post at Tyler Perry Studios in Atlanta, Georgia, on November 19, 2019. - The debate is scheduled for November 20. (Photo by SAUL LOEB / AF

Klobuchar’s own plan would cover up to three months. She said she kept plan costs in mind when selecting that timeline, noting an obligation to being “fiscally responsible” while still helping people.

These are some of the proposals from the Democratic White House hopefuls on how to tackle the nation’s housing crisis.

Steyer noted the problem is particularly bad in his home state of California. He said he would put federal money toward building affordable units.

Booker, a former New Jersey mayor, said he’d give renters a tax credit if they pay more than a third of their income in rent.

Biden said if he becomes president he would not direct his administration's Justice Department to investigate Donald Trump.

Biden said, "That's not the role of the President of the United States.”

Biden said that's a judgment to be made by the attorney general.

Buttigieg said he would continue the payments to farmers started in the Trump administration as a result of the U.S. trade war with China.

Buttigieg said they won’t be needed “because we will fix the trade war.”

He claimed the Trump administration measure “isn’t even making farmers whole,” and that “I don’t think this president cares one bit about farmers.”

Buttigieg pointed to rural America as a place where farms can be part of the solution to climate change by pursuing the “carbon negative farm,” likening the concept to the electric car.

He said that enlisting farmers is a way to get out the message on climate change that recruits everybody to be part of the solution, including politically conservative parts of the nation.

Biden answered a challenge from Steyer on the threat of climate change, also calling it “the No. 1 issue” facing the country.

Steyer has framed his candidacy around the issue. He said during Wednesday night’s debate that neither the former vice president nor Elizabeth Warren would characterize climate change as the most critical issue.

Biden replied that he does see climate change as such, calling climate change “the existential threat to humanity,” eliciting a somewhat stunned look from the billionaire businessman.

Referencing Steyer, the former vice president went on to say, “I don’t need a lecture from my friend,” noting his own work on Senate climate change legislation.

Sanders repeated his suggestion that executives in the fossil fuel industry could be prosecuted for their actions.

Harris said Trump got “punked” by North Korea. She said that Trump has conducted foreign policy based on his “fragile ego” and traded a photo opportunity with Kim Jong Un for “nothing.”

The administration has been trying to conduct diplomacy with North Korea over its nuclear capabilities. Harris said she wouldn’t make concessions to North Korea and slammed Trump for suspending military training operations with South Korea.

Harris also referred to the commander in chief as a “her,” one of her popular lines from the campaign trail about a woman winning the presidency.

Biden said that he would make the Saudi Arabian government “pay the price” for any responsibility in the killing of journalist Jamal Khashoggi last year.

Biden said he believes The Washington Post columnist was killed at the behest of Saudi Arabian Prince Mohammed bin Salman, and that, as president, he would end subsidies and sales of military material to the kingdom.

Biden said, “They have to be held accountable.”

More broadly, Biden said the U.S. needs to “vocally” call out these and other “violations of human rights” around the globe, which he argued that President Donald Trump has not addressed adequately.

Sanders said “it’s time to bring our troops home” from Afghanistan, and he would work with the international community to do so.

Biden advocated for cultural change in the wake of the #MeToo era, although perhaps with an interesting choice of words.

The former vice president advocated for the reauthorization of a bill that he supported in its original form, the Violence Against Women Act. Biden went on to discuss domestic violence, saying he felt that no man has the right to raise a hand to a woman in anger “other than in self-defense,” which he called rare.

Discussing the priorities of black voters, Cory Booker challenged Joe Biden’s recent comments that he would not push to legalize marijuana and that it’s a “gateway drug.”

Smiling and looking over at the former vice president, Booker mused, “I thought you might have been high when you said it!”

The New Jersey senator pointed out that marijuana is “already legal for privileged people.”

Biden replied that he believes marijuana should be decriminalized and that people convicted of marijuana-related crimes should be released from prison and have their records expunged. But, he added, he does support studying the drug’s long-term effects.