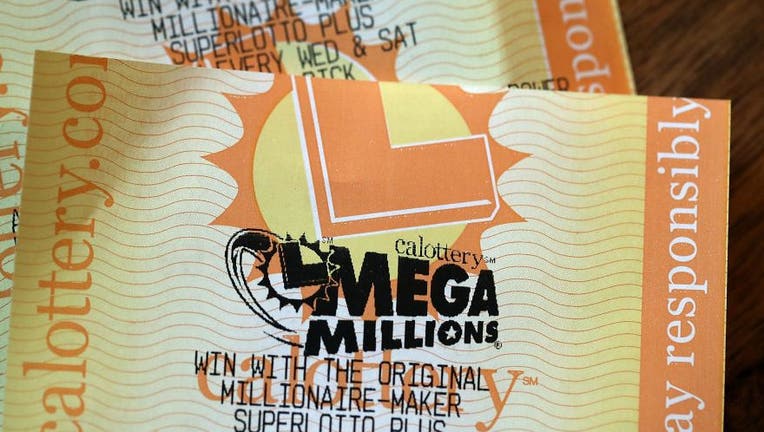 SAN ANSELMO, CA - JANUARY 03: Powerball and Mega Millions lottery tickets are displayed on January 3, 2018 in San Anselmo, California. The Powerball jackpot and Mega Millions jackpots are both over $400 million at the same time for the first time. Th

LOS ANGELES - The third-largest lottery jackpot in U.S. history will be at stake in Tuesday's multi-state Mega Millions drawing.

The jackpot has grown to an estimated $850 million, after no tickets matching all six numbers were sold for 35 consecutive drawings. The most recent drawing where a ticket with all six numbers was sold was Sept. 15, the fifth Mega Millions drawing of 2020 with a jackpot winner.

Since the game began in 2002, there have been 192 jackpots won by 217 individual tickets. There have been 20 jackpots shared by two or more winning tickets.

If a ticket with all six numbers is sold, the winner will have the option of receiving the jackpot paid in 30 annual payments, with each payment 5% larger than the previous one, or the cash option, a one-time, lump-sum payment equal to all the cash in the Mega Millions jackpot prize pool which is $628.2 million for Tuesday's drawing.

The odds of matching all five numbers and the Mega number are 1 in 302,575,350, according to the California Lottery. The overall chance of winning a prize is 1 in 24.

Buying tickets at a store where winning tickets have been sold in the past will not increase a purchaser's chance of winning a jackpot, according to USC mathematics professor Ken Alexander.

"The chance that a given place will sell a winning lottery ticket is just related to how many tickets they sell," Alexander said.

The jackpot for California's other multistate lottery game is also unusually high, with Wednesday's Powerball drawing worth a potential $730 million, the sixth-largest lottery jackpot in U.S. history.