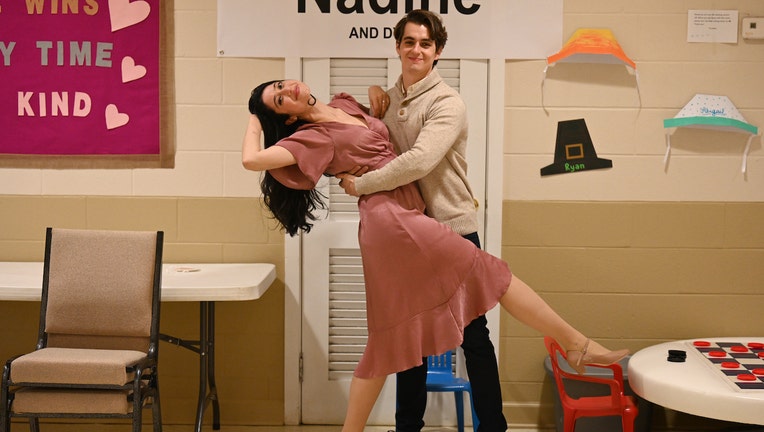 CHICAGO - Welcome back to "Welcome to Flatch" recaps! In this week’s episode, "Dance It Out," Kelly and Sam stoke the fires of ambition by starting a ride-share service while Cheryl gets to call upon her journalistic expertise. Just starting the show?Here’s our recap of the premiere. Ready to binge? The first seven episodes are streaming on Hulu.

Three weeks in and "Welcome to Flatch" has settled into a comforting pattern with its mockumentary storytelling: Each week, small town cousins Kelly (Holmes) and Shrub Mallet (Sam Straley) dream up some sort of lofty goal they want to achieve. And each week, they come up with a dubious new entrepreneurial enterprise to make it happen.

In "Dance it Out," they set their eyes on a pair of Nike Vaporfly Elite Flyprint 3D sneakers (the kind Tony Hawk wears to walk his dogs, naturally). The shoes normally retail for $2,000 but accidentally ended up at Flatch Fleet for only $100. "Walking like the Hawking" for only $100? There’s no way Kelly and Shrub are going to pass that up — especially since they wear the same size shoe and can just trade off wearing them every other day.

To raise the hundred bucks, the Mallet cousins first decide to throw a garage sale. Then Shrub sets up a side business selling fake Flatch treasure maps to unsuspecting kids (he went through a big "Pirates of the Caribbean" phase back in high school). But it’s Kelly who stumbles upon the biggest scheme-of-the-week: Starting a hip-hop dance school called The Kelly Mallet Phresh Air School For Hip Hop.

Okay, so Kelly’s motives aren’t solely driven by sneakers. She first gets the idea when she sees her nemesis Nadine (Taylor Ortega) teaching ballroom dances classes to senior citizens at the church community room. That brings back some rather painful memories of an elementary school ballet recital gone wrong: While little Nadine stole the spotlight with a flawless solo, little Kelly tried to top her and took a tumble off the stage instead.

That’s when hip-hop became Kelly’s preferred style of dance. And now she’s decided to share her skills for only $10 a pop.

Beth (Erin Bowles), Cheryl (Aya Cash), Mickey (Justin Linville) and June (Karen Huie) are among those who excitedly turn up for Kelly’s first class. Only it quickly becomes clear that Kelly’s questionable dance skills are rather more, er, intuitive than teachable. 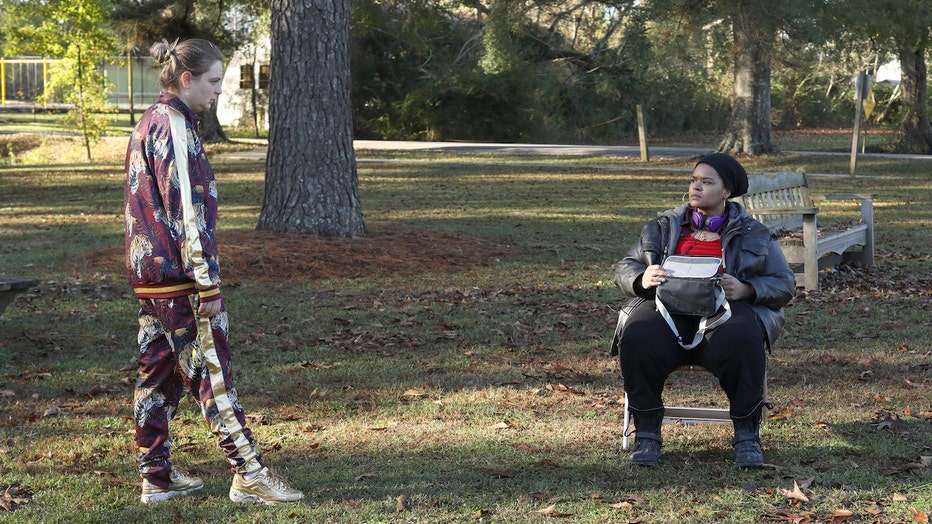 In fact, Big Mandy (Krystal Smith) probably has the right idea here. Instead of paying to take the class, she decides to "audit" it from the sidelines during her lunchbreak. As Mandy explains to the camera, "I usually watch something funny when I eat, because I read in this alternative medicine blog it creates enzymes which helps aid in my digestion. Now, I usually watch ‘The Simpsons’ when I eat my meals, but when I heard about this class I knew it was gonna be hilarious."

Smith is a delight as Mandy breaks down into gales of laughter at Kelly’s moves. "I’m about to digest like a [bleep]," she adds. 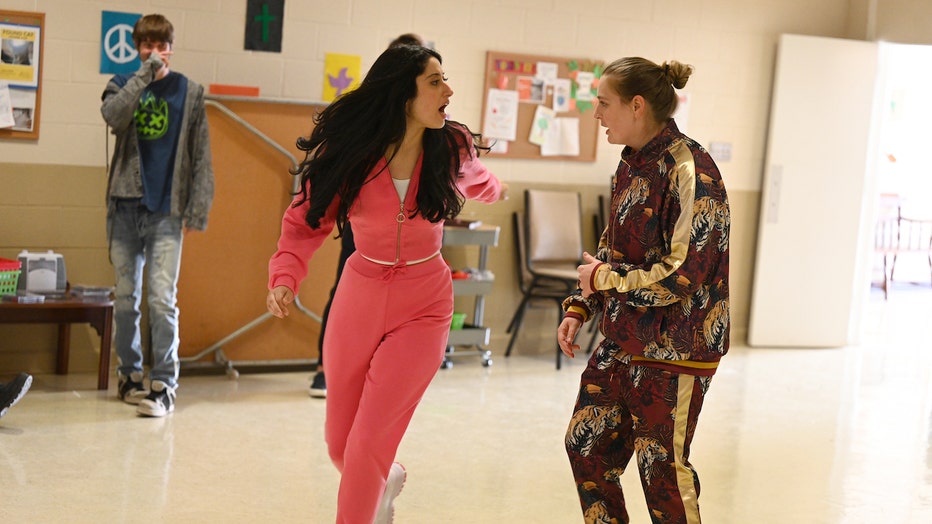 When Cheryl sprains her ankle during class (blame those darn treasure hunting holes), Kelly has to pivot to a new perspective with the help of some wise counsel from Father Joe (Seann William Scott) — who knows a little something about dance himself, thanks to his days in the Christian boy band A-Men (they were huge in Germany). Joe reminds Kelly that dance shouldn’t be a competition. It’s a sacred form of personal and spiritual expression that should be taught from the heart with pure motives.

So what does Kelly do when she discovers that Nadine is now teaching a hip-hop class too? Declare a dance off, naturally.

The big climatic dance battle set to "The Power" by Snap! is the standout showpiece of the episode, and Holmes and Ortega both go hilariously full-out with Kelly and Nadine’s absolutely ridiculous interpretations of hip-hop. (Shimmying and high kicks are involved.) 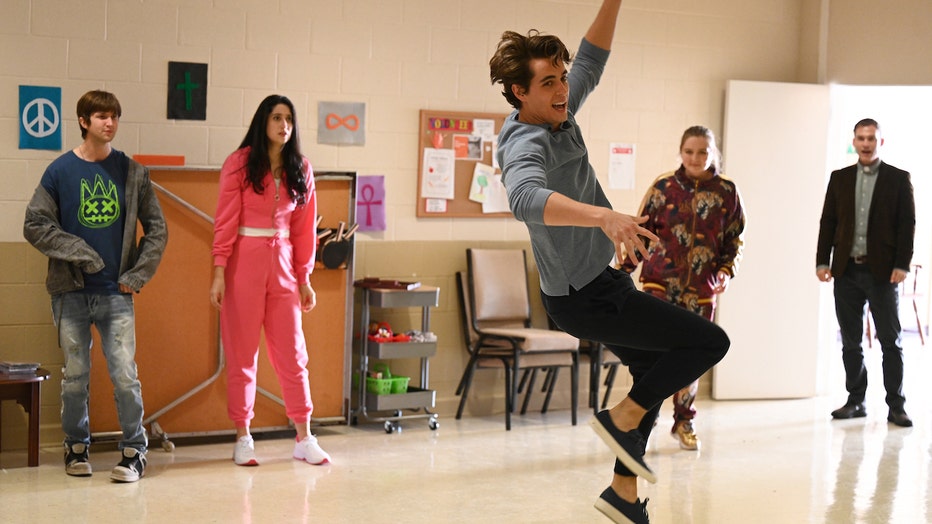 The real scene-stealer, however, is Nadine’s husband Dylan (Kyle Selig), who it turns out really can saut de basque, spin down sweep and monkey flip with the best of them. Selig is clearly an actual trained dancer, which makes it all the funnier when Dylan deadpans to the camera, "I have no idea what happened in there. I think I blacked out."

The power of Dylan’s moves inspires Kelly to declare herself the winner, misquote Father Joe’s big speech and announce to the room, "I hereby declare dance schools dumb!" Classic Kelly.

Love is in the air 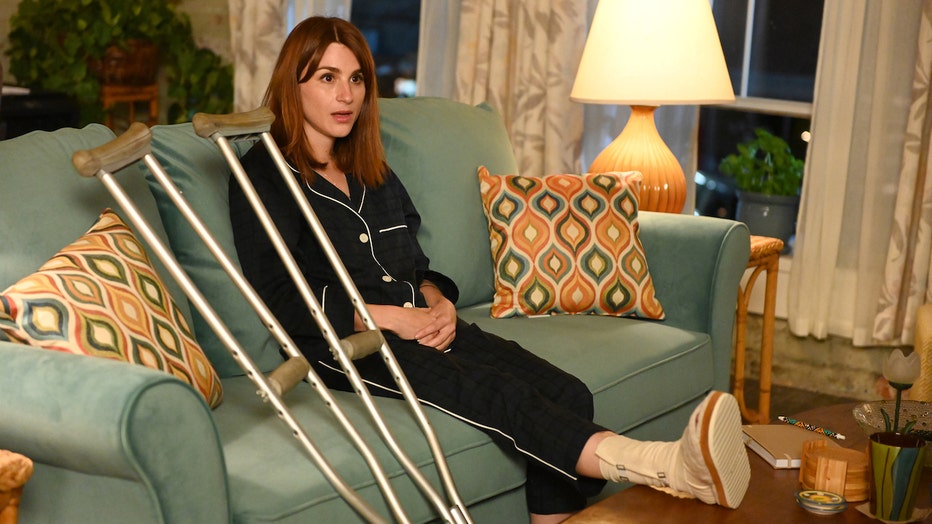 Dance isn’t the only thing on the move this week. We also get some new updates on the love front too. Yes, Shrub and Mickey are both still crushing on Beth, while Kelly thinks she has a "spark" with the married Dylan (they kissed back in grade school). Plus bisexual queen Big Mandy reveals she’d happily date either Nadine or Dylan if they ever broke up.

But it’s Cheryl who finds herself at the center of an honest-to-god love triangle. Turns out that when she visited Pockton last week, she did more than just recover the stolen "Welcome to Flatch" sign. She also caught the eye of "Pockton Gazette" editor Jimmy (Desmin Borges), who sends her get-well flowers for her sprained ankle.

He’s not the only one thinking of Cheryl, however. When her ex, Joe, stops by to bring her some comfort food, he and Cheryl almost share a kiss (!!!) before they stop themselves when they remember they’re being filmed by the documentary crew.

Even more intriguingly, Joe reveals to the camera that he only broke up with Cheryl because he figured she was so much smarter than him that she’d eventually get bored and have to break up with him anyway. "I just didn’t want her to have to go through that," he explains. So could love still be on the table for these two crazy kids? We’ll have to tune in next week to find out. 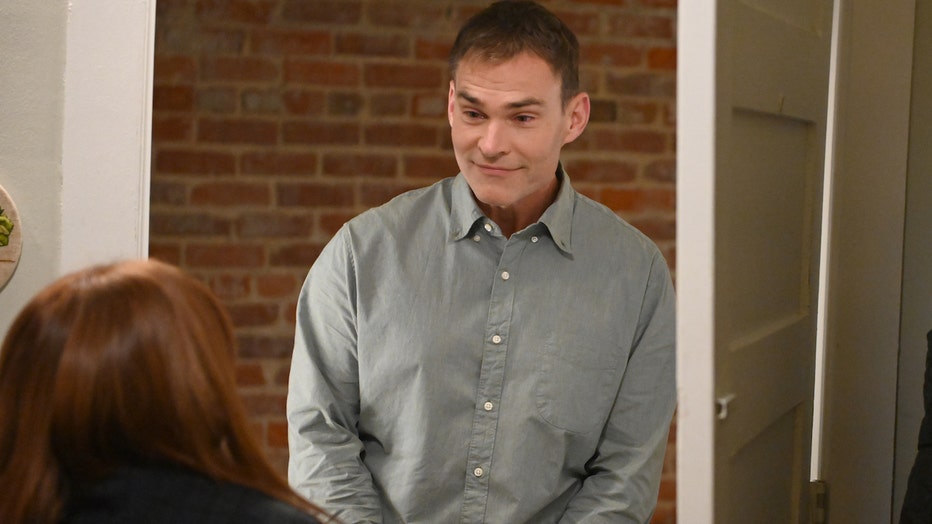 Oh and as for those sneakers? It turns out Father Joe bought them before Kelly and Shrub could — without having any idea how much they’re actually worth. As he puts it, "I thought they were pretty fly!"