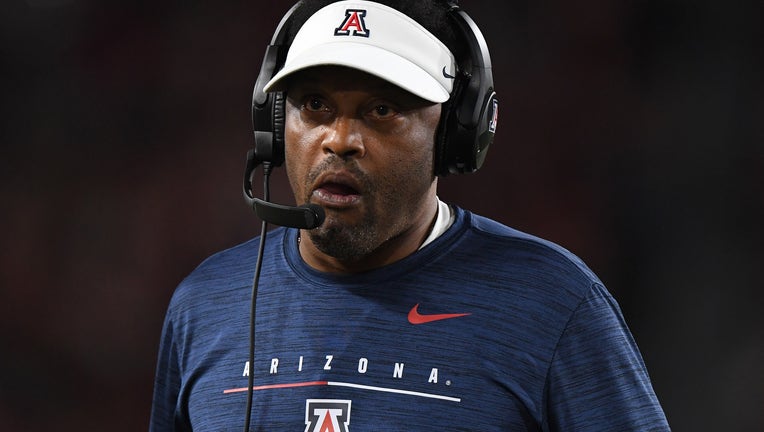 Kevin Sumlin on the sidelines during a game between UArizona and the USC Trojans in 2019. (Photo by Harry How/Getty Images)

PHOENIX - One day after the Arizona Wildcats football team was routed in the Territorial Cup against ASU, officials with the University of Arizona say they have fired their head football coach, Kevin Sumlin, effective immediately.

"When we hired Kevin three years ago, we had very high hopes for our football program. Unfortunately, we simply have not seen the results and upward trajectory in our program that we needed to, and I believe now is the time for a change in leadership," wrote UArizona Vice President and Director of Athletics Dave Heeke.

According to UArizona Athletics officials, Sumlin came to UArizona after serving as the head coach at Texas A&M and the University of Houston.

"The University will honor the terms of Sumlin's existing contract, including all buyout provisions, with funding from athletics generated revenue and sources," read a portion of the statement.

Even prior to the Territorial Cup match on Dec. 11, there was speculation over Sumlin's future at UArizona. In an opinion piece published by campus student newspaper The Daily Wildcat on Oct. 1, Ryan Wohl touched Sumlin's coaching record at UArizona.

"...After two seasons coaching in the Pac-12, the Wildcats have not won six or more games and have not appeared in a bowl game since Sumlin’s arrival," Wohl wrote. "I believe that the only reason why it’s taking athletic director Dave Heeke longer than expected to move on is because Heeke wants to convince himself that Sumlin can still manage to put together a few winning seasons as he did in his past."

Wohl went on to predict that Sumlin will be fired.

"I would be very shocked if Kevin Sumlin is the head football coach of the Arizona Wildcats after the 2021 season as he has shown zero growth with this program over the last three years," Wohl wrote.