The route for International Atomic Energy Agency (IAEA) inspectors heading to a nuclear power plant in southern Ukraine was shelled by Russian forces just after the team’s departure for the site, the governor of Zaporizhzhia said on Sept. 1. (Credit: Maria Avdeeva via Storyful)

A U.N. inspection team entered Ukraine's Zaporizhzhia nuclear power plant Thursday on a mission to safeguard it against catastrophe, reaching the site amid fighting between Russian and Ukrainian forces that prompted the shutdown of one reactor and underscored the urgency of the task.

The 14-member delegation from the International Atomic Energy Agency arrived in a convoy of SUVs and vans after months of negotiations to enable the experts to pass through the front lines and get inside Europe's biggest nuclear plant.

"The IAEA is now there at the plant and it’s not moving. It’s going to stay there. We’re going to have a continued presence there at the plant with some of my experts," IAEA director Rafael Grossi, the mission leader, declared after the group got its first look at conditions inside.

But he added: "I will continue to be worried about the plant until we have a situation which is more stable." 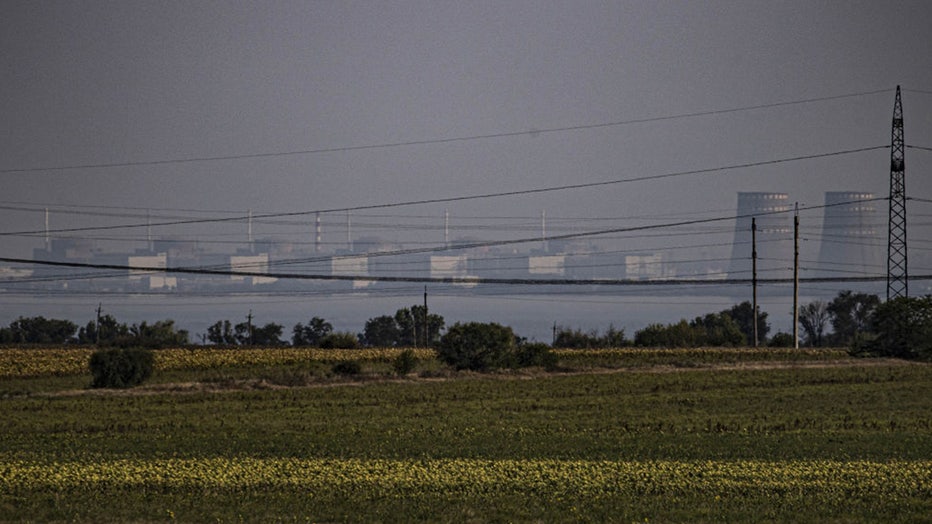 As the experts made their way through the war zone toward the complex, Russia and Ukraine accused each other of shelling the area and trying to derail the visit. The fighting delayed the team’s progress.

"There were moments when fire was obvious — heavy machine guns, artillery, mortars at two or three times were really very concerning, I would say, for all of us," Grossi said.

Just before the IAEA team arrived, Energoatom, Ukraine’s state nuclear power company, said Russian mortar shelling had led to the shutdown of one of its reactors by its emergency protection system and had damaged a backup power supply line used for in-house needs.

One of the plant’s reactors that wasn’t operating was switched to diesel generators, Energoatom said.

Once inside the plant, Grossi said, his experts were able to tour the entire site, including control rooms, emergency systems and diesel generators. He said he met with the plant's staff and residents of the nearby village, Energodar, who asked him for help from the agency.

He reported that the team had collected important information in its initial inspection and will remain there to continue its assessment.

"It is obvious that the plant and the physical integrity of the plant has been violated several times by chance, deliberately — we don’t have the elements to assess that," Grossi said. "And this is why we are trying to put in place certain mechanisms and the presence, as I said, of our people there."

The Zaporizhzhia plant has been occupied by Russian forces but run by Ukrainian engineers since the early days of the 6-month-old war. Ukraine alleges Russia is using it as a shield to launch attacks, while Moscow accuses Ukraine of recklessly firing on the area.

Ukrainian President Volodymyr Zelenskyy had tough words for the IAEA delegation. While applauding its arrival at the plant, he said independent journalists were kept from covering the visit, allowing the Russians to present a one-sided, "futile tour."

And he said that while Grossi agreed to support Ukrainian demands for the demilitarization of the plant — including the withdrawal of Russian forces from it — the IAEA has yet to issue such a call publicly.

Fighting in early March caused a brief fire at its training complex, and in recent days, the plant was briefly knocked offline because of damage, heightening fears of a radiation leak or a reactor meltdown. Officials have begun distributing anti-radiation iodine tablets to nearby residents.

Experts have also expressed concern that the Ukrainian staff is overworked and stressed out from the occupation of the plant by Russian forces — conditions they say could lead to dangerous errors.

Grossi said after his initial tour that the Ukrainian employees are "in a difficult situation, but they have an incredible degree of professionalism. And I see them calm and moving on."

"We are taking all the necessary measures to ensure that the plant is secure, that it functions safely and that the mission accomplishes all of its plans there," he said.

Ahead of the visit, Russia's Defense Ministry reported that Ukrainian forces unleashed an artillery barrage on the area and sent a group of up to 60 scouts to try to seize the plant on the Dnieper River. It said that the Ukrainian troops arrived in seven speedboats but that Russian forces "took steps to destroy the enemy," using warplanes.

Some of the Ukrainian shells landed 400 meters (yards) from the plant’s No. 1 reactor, Russian authorities said.

The Russian-installed administration in Enerhodar reported that at least three residents were killed early Thursday by Ukrainian shelling.

Ukrainian officials, meanwhile, accused Russian forces of shelling Enerhodar and a corridor that the IAEA team was set to go through.

Neither side’s version of events could immediately be independently verified.

The fighting came as Ukraine endeavored to start the new school year in the middle of a war. Just over half of the country's schools are reopening to in-person classes despite the risks.

In other developments, authorities with the Russian-backed separatist government in the eastern region of Donetsk said 13 emergency responders were killed by Ukrainian shelling in Rubtsi, a village in neighboring Kharkiv province. Much of the fighting in recent weeks and months has centered on the area.

Gatopoulos reported from Kyiv, Ukaine. Storyful contributed to this report.