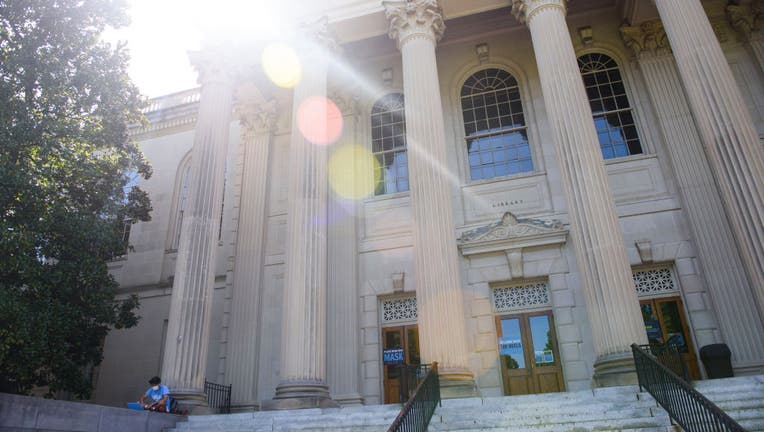 CHAPEL HILL, NC - AUGUST 18: A student studies outside the closed Wilson Library on the campus of the University of North Carolina at Chapel Hill on August 18, 2020 in Chapel Hill, North Carolina. The school halted in-person classes and reverted back

CHAPEL HILL, N.C. - The University of North Carolina, Chapel Hill, said that it has detected lead levels in multiple sinks and water fixtures across campus.

Administrators said on September 1, they removed three drinking fountains from service at the Wilson Library after tests detected lead levels from the components of those fountains. Other fountains were tested but tested negative.

That action prompted the university to test more fixtures in several other buildings across campus.

According to an alert sent out to the campus Wednesday, the university detected lead levels in eight more water fountains and 14 sinks in buildings including Fordham Hall, Hamilton Hall, Manning Hall, Phillips Hall, South Building and Wilson Library. No residence halls were on the list.

"Environment, Health and Safety is prioritizing testing fixtures that have similar components to those that have tested positive for lead or are of a similar age," the university posted on its website. "If there is any level of lead detected, the fixture is removed from service completely and the process to replace that water."

It’s believed the lead contamination came from corrosion in the plumbing.

Lead is toxic to everyone but young children are especially at risk, according to the CDC.

No word of anyone on campus has contracted lead poisoning.

When lead gets absorbed into the body—often via contaminated water or food, or when lead dust or fumes are inhaled—it damages vital organs, such as the kidneys, liver, and brain; and spotting early signs of poisoning before physiological and psychological impairments occur can be tricky, Dr. Maida Galvez, an associate professor of preventive medicine and pediatrics at the Icahn School of Medicine at Mount Sinai in New York City said.

After high levels of exposure, the symptoms of lead poisoning can be similar in children and adults, and range from anemia to abdominal pain to seizures. They may even be flu-like, and include constipation, nausea, stomachaches, and fatigue.

Low levels of lead in the blood typically don’t produce any noticeable symptoms, Dr. Galvez says; or the symptoms may be less distinct, such as behavioral issues or difficulties with learning (trouble thinking straight, for example, or memory blips).