TEMPE, Ariz. - The U.S. 60 in Tempe has reopened in both directions after a water main break flooded the freeway over two weeks ago, forcing it to close.

The westbound portion of the freeway reopened at 10 p.m. on May 22. The eastbound lanes were previously reopened after a 24-inch pipe ruptured causing major flooding on the freeway at McClintock Drive.

"A 24-inch City of Tempe water transmission line broke overnight in the middle of the U.S. 60, leading to flooding and the temporary full closure of the freeway between Loop 101 and Rural Road," city officials said on May 7.

Crews worked to shut off water to the area before working with the Arizona Dept. of Transportation to fix the damage. The freeway had flooded for several hours, and damage was done beneath the pavement.

An estimated 8 million gallons of water were lost in the break. Water rates won't increase because of this incident.

To mark the reopening of the freeway, Mayor Corey Woods declared May 23 as U.S. 60 Workers Day.

Randy Everett with ADOT says, "In my time in ADOT, I’ve never seen anything quite like this."

"Working with our contractor to cut a hole in the pipe in McClintock so that we can send a camera down the line to actually pinpoint where the break is," explained Mark Weber, interim deputy municipal utilities director of water utilities with the city of Tempe.

He said the pipe is about 50 years old, and would normally last about 75 years. This is the first transmission main break they’ve had like this in the city’s history. "Pipes corrode, you know. They’re steel cylinder pipes," Weber said.

The city says it's actually been in the planning stage of an assessment project to inspect these pipes for the last year, but the project hadn’t been executed yet. "We knew that this was a possibility, so we were trying to get out in front of it, and unfortunately we didn’t quite get out in front of this," Weber said.

How much this will cost taxpayers in Tempe, officials say they aren't prepared to answer that, but it’s going to be significant.

"While most of the valves are already shut, there are additional valves south of the freeway that still need to be completely closed to the point of having a water-tight seal. It is normal for many valves to not seal completely – typically that is not an issue that impedes work on a water line. However, in this instance, a complete seal is necessary for the freeway to dry out and be repaired," Tempe officials said on May 9.

"Using a camera fed through the line, crews have identified an approximately 1.5-foot rupture in the steel pipe. The break is not under the freeway; it is located at the top of the McClintock Drive westbound off-ramp, between the McClintock Drive overpass and pedestrian bridge. The pipe is about 22 feet down in this location," city officials explained, adding, "City employees and contractors are working tirelessly around the clock to resolve the break and damage to or beneath the freeway. The pipe repair is now separate from the freeway repair and reopening since the break is not under the freeway," officials said. 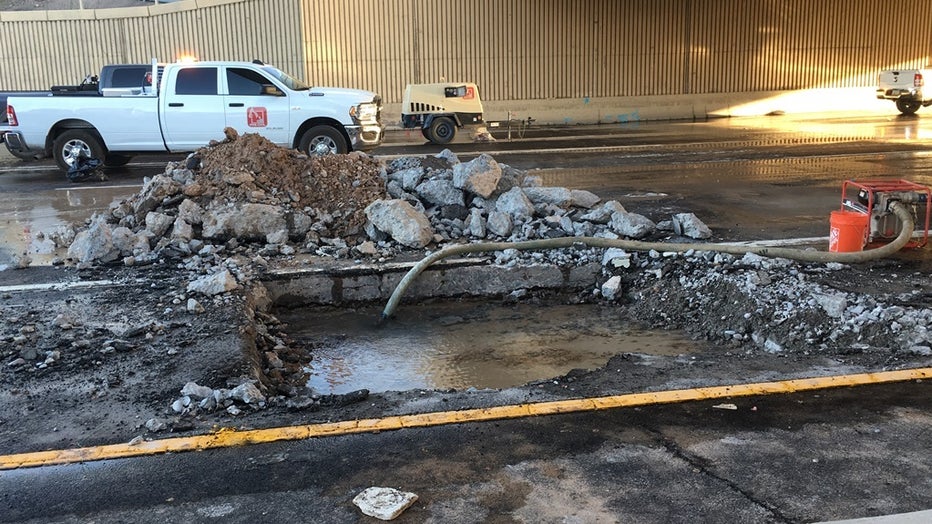 It's a Tempe pipe, so the city shut off the water main and took the lead on assessing and repairing it. However, ADOT comes in for the major water damage and erosion to the road.

"It's not about the water sitting on the freeway," Nintzel said. "It's actually going to be the damage caused by the force of water underneath the freeway. When that pipe burst, there was actually a lot of water causing erosion. We do know that's occurred, we don't know how bad the damage is."

Drivers were diverted, of course, due to the closure.

"I said wow this is really inconvenient. I pulled off, and I don't remember what road I got on," a driver said. "I've been on there for like 20 minutes right now. It was hard to get off," another driver said.

Combine this closure with the Broadway Improvement Project shutting down I-10 westbound, between Loop 202 and US 60.

After the water main break happened, the city of Tempe said there was no estimated time to complete repairs. Residential and commercial water services weren't impacted by the incident.

"Now city contractors are working alongside ADOT to fully assess the damage and begin the process of making repairs. This entails placing a camera in the line to detect the exact location of the break. Once located, the line is under about 1 ½ feet of pavement, so digging will need to occur – followed by the repair, repaving and inspections before traffic can resume," city officials explained.

On May 12, officials held a news conference to provide updates on the ongoing closure.

During the news conference, Tempe city officials asked for patience from people and urged commuters to not use neighborhood roads to get around the traffic but to use the described alternate routes instead.

A few days later on May 18, Tempe officials said crews were working around the clock to get the westbound lanes back open as quickly and safely as possible.

"Sometimes in life things just happen and infrastructure doesn’t work exactly the way you think it will," Tempe Mayor Corey Woods said. "But I can guarantee that we’re gonna get this back up and running as soon as possible. And we're gonna be implementing even more things moving forward to make sure that we can actually diagnose something like this going forward, so we don’t see this kind of disruption in the future."

On May 20, ADOT said crews made significant progress in paving the westbound lanes near McClintock Drive.

RELATED: Major Phoenix-area freeway closures, restrictions this weekend: What to know for May 6-9

US 60 WB closure: Latest on the water main break reconstruction

Tempe officials said work on the westbound lanes would likely stretch into the weekend, but crews are working around the clock to get the lanes back open as quickly and safely as possible. FOX 10's Brian Webb reports.

The water main break happened almost a week ago, and has caused troubles for commuters. FOX 10's Irene Snyder reports.

Commuters, rideshare drivers frustrated over US 60 closure in Tempe

Water main break located with camera that caused US 60 flooding

FOX 10's Bailey Miller gives us an update on the ongoing closure of US 60 as repairs are made after a May 7 water main break.

US 60 in Tempe still closed heading into work week

Tempe officials, ADOT says 8M galls of water was released during US 60 flooding

Just a day after the major highway closure, in both directions, Tempe city officials and ADOT say 8 million gallons of water were released during the flood. FOX 10's Marissa Sarback has the latest.

US 60 in Tempe closed due to water main break 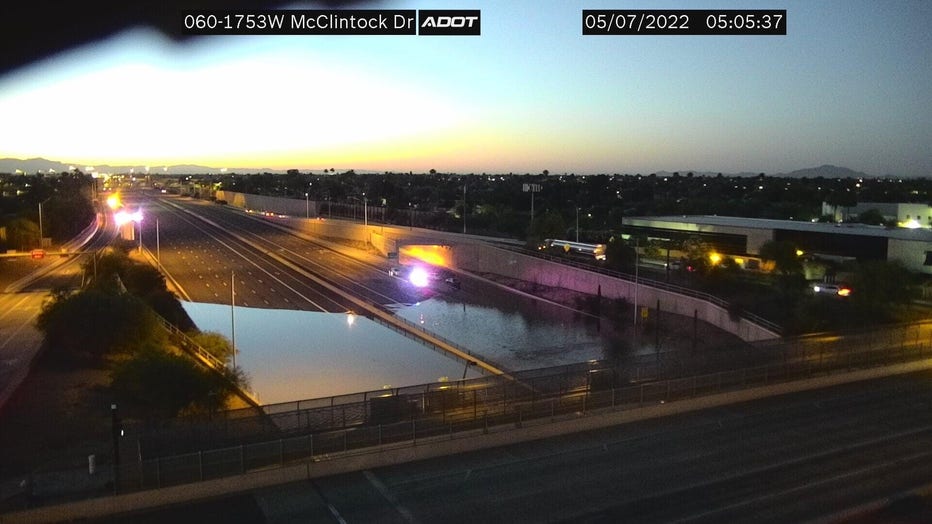 Water main break on US 60