Balbir Singh Sodhi was killed in the days following September 11, and 20 years after his death, members of the Sikh community gathered to remember the man. FOX 10's Justin Lum reports.

MESA, Ariz. - Sikh businessman Balbir Singh Sodhi was helping plant a flower bed at his Arizona gas station when he was shot dead by a man seeking to avenge 9/11. Mistaken for an Arab Muslim because of his turban and beard, Sodhi was the first person to die in a wave of bias crimes unleashed by the attacks.

"Five shots rang out and Balbir uncle fell and died right there, he bled to death not knowing who shot him or why," Sikh activist Valarie Kaur told scores of people gathered Wednesday night at the Chevron station for the 20th anniversary of Sodhi’s murder. "His killer, when arrested, said: ‘I am a patriot.’" 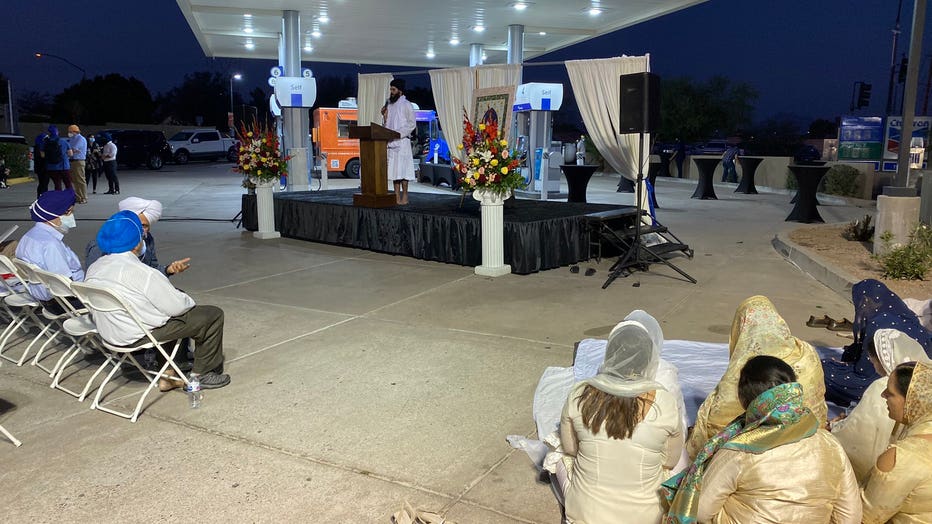 Balbir Singh Sodhi was killed in the days following September 11, and 20 years after his death, members of the Sikh community gathered to remember the man.

9/11 released a dangerous wave of white supremacy and Islamophobia that, two decades later, continues to manifest in attacks on members of a variety of belief traditions. But religious leaders say Sept. 11 also broadened, diversified and solidified interfaith movements as more Muslims and members of other lesser-known groups increasingly were pulled in.

"Sept. 11 opened a spigot for hate and bigotry in the United States, but it also opened a space for groups to come together and know each other better," said Tony Kireopoulos, who oversees interfaith relations for the National Council of Churches in New York the largest Christian ecumenical organization in the U.S.

One example is his group’s ongoing dialogue efforts with Sikhs, Muslims, Buddhists, Hindus and Jews, said Kireopoulos, a Greek Orthodox theologian and associate general secretary for the council.

The council of Christian denominations was involved in the early efforts of the Shoulder to Shoulder Campaign, a national coalition formed a decade after Sept. 11 to counter anti-Muslim sentiment amid an uproar over efforts to build an Islamic center near ground zero.

"We’ve always had contact with the Muslim groups, but after 9/11 it became more intentional," he said. "When you meet frequently you get to know each other, so you can respond as neighbors and friends."

Maggie Siddiqi, senior director of faith initiatives at the Center for American Progress, a Washington policy institute, said those kinds of interfaith efforts were broadly welcomed by Muslims in the U.S., who were targeted more aggressively than ever before.

"It’s hard sometimes to see the silver lining, but there has been a lot of learning going on over the last 20 years," said Siddiqi, who was trained as a Muslim chaplain.

In the leadup to this month’s Sept. 11 memorial events, she noted, Anti-Defamation League CEO Jonathan Greenblatt apologized to Muslims for his organization’s opposition a decade ago to the opening of an Islamic Center blocks from the World Trade Center site, calling it "wrong, plain and simple." The league’s opposition came several years before Greenblatt joined the civil rights organization. The center was never built.

Suspicion of Muslims didn’t start with Sept. 11, but the terror attacks amplified the mistrust.

A poll by The Associated Press-NORC Center for Public Affairs Research conducted ahead of the 9/11 anniversary found that 53% of Americans have unfavorable views toward Islam, compared with 42% who have favorable ones. That’s in contrast to mostly favorable opinions about Christianity and Judaism.

The Sikh Coalition was formed in the wake of 9/11 to advocate for the rights of Sikh Americans and educate people about the faith, even working to include Sikh history in school curriculum standards. It also has documented more than 300 cases of violence and discrimination against Sikh Americans in just the first few months after the attacks.

Such attacks and others against people of different faiths cause religious leaders to warn that countering bias remains an urgent task.

"I still don’t think we are in a good place," said Rabbi Shmuly Yanklowitz, president and dean of Valley Beit Midrash, a Phoenix-based global center for learning and action rooted in Jewish teachings. "I really worry for minority groups in general and especially for Muslims, Sikhs and refugees seeking asylum."

Yanklowitz was unable to join this year’s memorial honoring Sodhi because it coincided with Yom Kippur, the holiest night on the Jewish calendar. But more than 100 people attended, including local and national politicians and Sikh, Christian and Muslim leaders.

There was hardly a mention of Frank Roque, who is serving a life sentence in the Sept. 15, 2001 killing. He also was accused of drive-by shootings that same day at an Afghan family’s home and a Lebanese man’s convenience store, although no one was injured in those attacks.

Rana Singh Sodhi has since forgiven the killer and works to keep his brother’s legacy alive, sharing his story with schoolchildren, faith groups and government officials.

"We celebrate not only my brother’s life but all the victims of 9/11 and all the victims of hate crimes," Sodhi said from a stage in front of the gas pumps as cars whooshed by in the dark. "To show unity and love to each other ... that’s the only way we can combat the hate."

Associated Press religion coverage receives support from the Lilly Endowment through The Conversation U.S. The AP is solely responsible for this content.