As the work marks World Suicide Prevention Day on Tuesday, a Valley mom has made it her mission to prevent youth suicide, after her son took his own life. FOX 10's Matt Galka reports.

PHOENIX - As the work marks World Suicide Prevention Day on Tuesday, a Valley mom has made it her mission to prevent youth suicide.

"These past two years have been tough," said Francine Sumner. It was just over two years ago when Sumner's son, Zach, took his own life at the age of 16.

Ever since then, Sumner has been committed to making a difference. She started a group called "Kid In The Corner". Sumner said Zach had felt invisible at times, like nobody cared, like he was in a corner. She wants to change that.

"I feel like teaching kids to reach out to talk about their mental health, and to be that friend that others can come to is an integral part of preventing suicide," said Sumner.

At Shea Middle School in Phoenix, a "Kid In The Corner" bulletin board is displayed in the cafeteria. A student took their own life last year, and principal Scott Lawrence wanted to do something

"That incident and a few others has influenced my thinking, that I want Shea here to be a place where we give kids the tools necessary to deal with hard things in their lives," said Lawrence.

The group asks kids and adults to take the "Penny Pledge", a physical reminder to reach out, be aware, and listen to others who might be struggling.

"They pledge to reach out to the kid in the corner," said Summer. "Smile, say 'hi', ask where they’ve been. They pledge to take care of their own mental health, to know it’s not a stigma, and pledge to wear their pennies proudly, so other people know they're safe and caring people to talk to."

Kid In The Corner 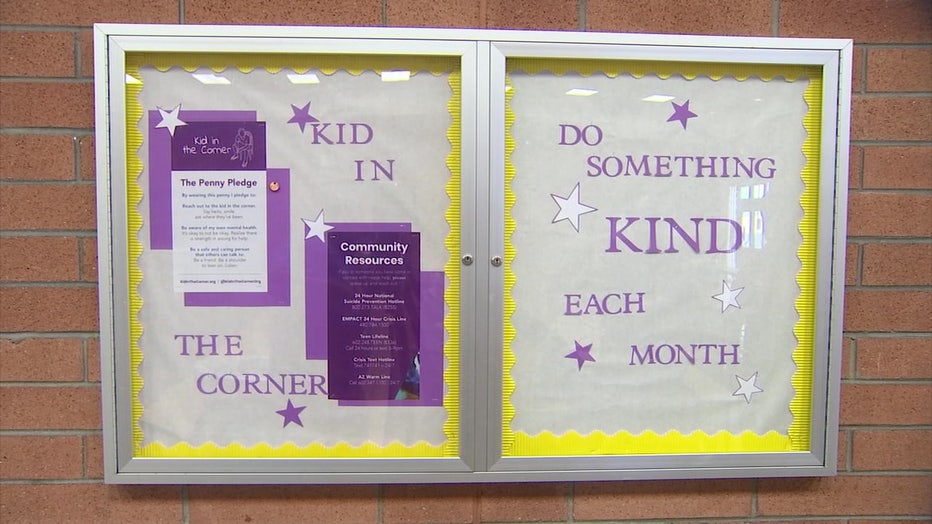