Sky color might seem to be just a daily choice between blue or gray or some mixture of the two, but we've found there have been times rare natural phenomenon have turned the skies shades of dark red, or a haze of yellow, or even an eerie shade of what might be best described as "frog green."

In fact, we've found instances that together, cover every color of the rainbow!

RED: Not always a sailor's delight

When massive wildfires burn across the landscape, their billowing smoke not only degrades the air quality, but can cast an eerie pall over the region. 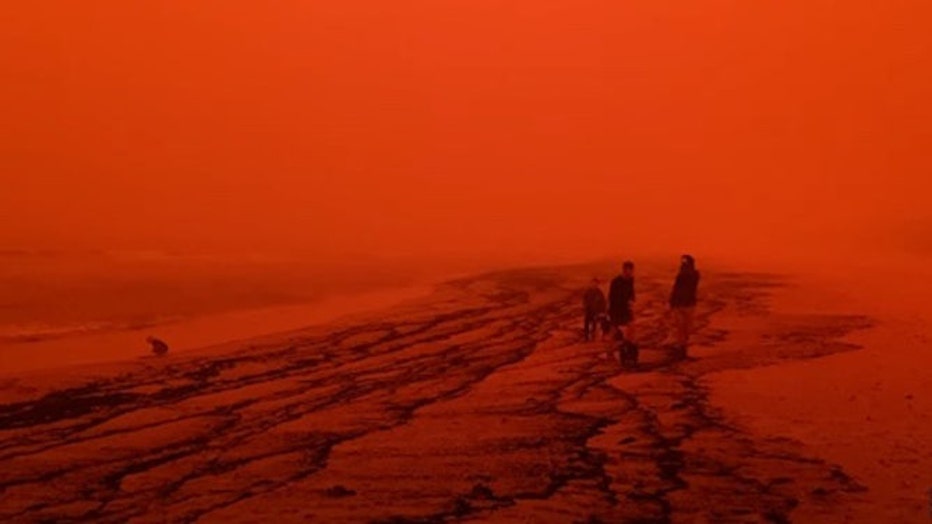 Smoke-choked air is full tiny particles of burning debris that create light refraction within the clouds.  Sunlight contains multiple wavelengths that include all the colors of visible light. When all visible wavelengths combine, the sunlight looks white. But particles in clouds… and smoke plumes… can block some of the shorter wavelengths of blue and green light from shining through, leaving the longer red wavelengths behind.

SHEEP FIRE? PIPELINE FIRE? HERE IS HOW WILDFIRES GET THEIR NAMES

That was the case in these surreal videos from photographers trapped inside thick clouds of smoke. The smoke particles wiped out all the blues and greens and yellows, leaving the red light to survive.

WATCH: See how crazy weather lights up the sky every color of the rainbow

ORANGE: Dust in the Wind

That same physics is in play with these orange skies, only this time it's dust and dirt.

Dust storms, or sometimes called "haboobs", form as heavy rains fall from thunderstorms and create tremendous downdrafts that race out ahead of the storms, picking up sand and dust from the barren desert landscape along the way. 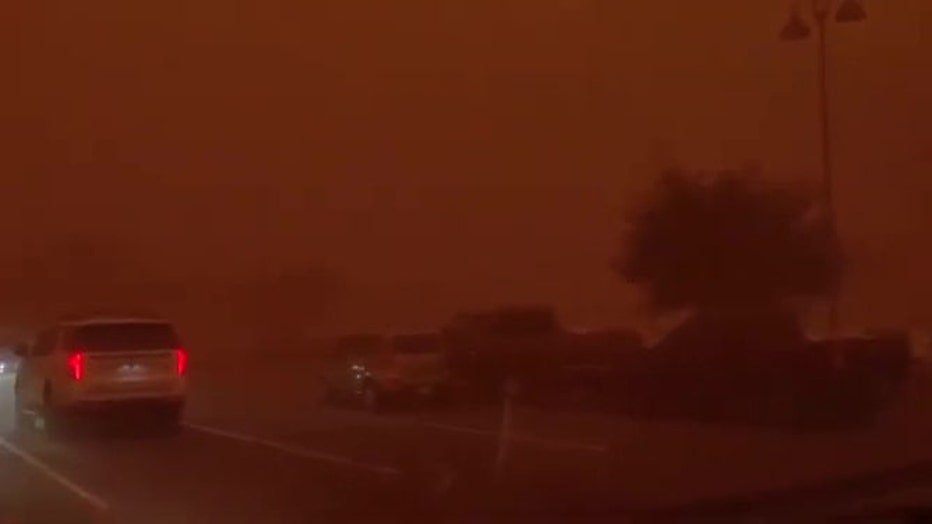 The dust and sand allow more of the orange wavelengths to get through instead, depending on the thickness of the cloud and the size of the particles.

YELLOW: Nothing to sneeze at… or is it?

This nightmarish scene -- at least for allergy sufferers -- was courtesy of a "pollen storm" in North Carolina. 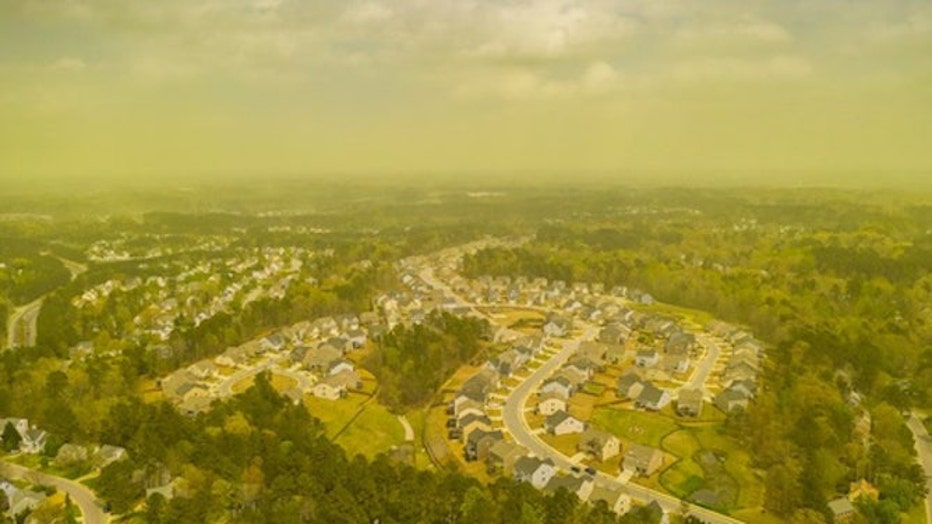 Haze made up of tree pollen from the pines of central N.C. (Jeremy Gilchrist)

ALLERGY SUFFERERS YOU MIGHT BE CLEANING YOUR HOUSE ALL WRONG

These wind-whipped clouds of what the photographer Jeremy Gilchrist termed "Pollmageddon" and "The Pollening" turned the skies yellow in the spring of 2019 as the pine trees let loose in Durham.

GREEN: Kermit in a Tornado?

No, your eyes still aren't watering from the pollen photos in the previous section-- the skies really did turn that ridiculous shade of green in South Dakota this past summer.

Much like the red-tinge of the wildfires or orange tinge of the dust, this too was caused by particles scattering out certain wavelengths of sunlight in a cloud -- only this time it was large hail! 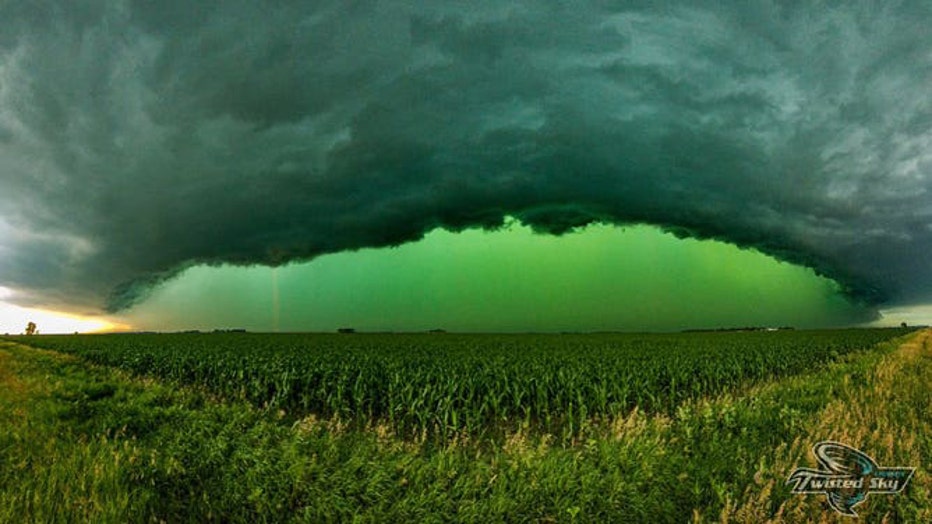 Spotters have often remarked of skies turning green or a teal blue as strong storms approached, and it's believed the large hailstones inside the clouds are what are just the right size to let green and sometimes blue/teal light escape.

WHY THE SKIES OVER THE PLAINS TURNED GREEN DURING TUESDAY'S DERECHO

Hail stones are caused by strong updrafts inside severe thunderstorms. Those upward winds continuously blow raindrops to the frozen upper reaches of a thunderstorm, where it will turn into a hailstone.

The frozen stone will begin to fall, collecting new raindrops on the way down until it reencounters those updrafts, and it’ll blow skyward, freezing this newly acquired water into another layer of ice. The process repeats and the hail stone grows until the stone weighs heavier than the updraft can support.

A golf-ball size hail stone needs a 65 mph vertical wind to form, while a grapefruit-size ball of hail will fall to the ground at speeds around 100 mph.

A powerful event turned the skies a neon blue over New York City.

Or, make that a power-less event.

A massive ConEdison transformer exploded at their plant in Queens in 2018, sending powerful electric explosions into the sky and as it reflected off the overcast layer to bring a surreal blue that might have looked like the Ghostbusters portal was awakening. 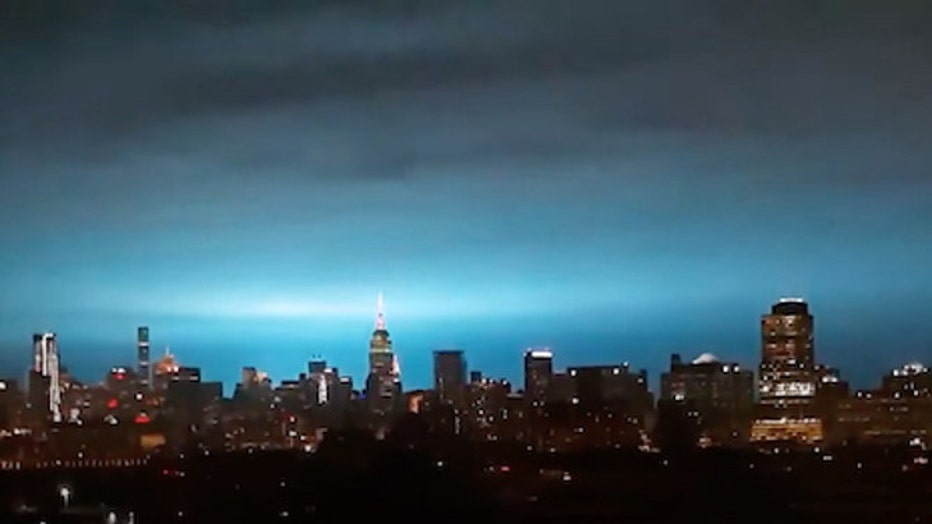 No one was injured. Or whisked to alternate dimensions.

PURPLE: A sunset that will literally blow you away

For the final color of our rainbow (sorry, indigo) we look to the Gulf Coast and Southeast where in recent years skies have turned purple in the wake of passing hurricanes.

The three examples we show here are in Florida from Hurricane Michael, Tropical Storm Eta and Hurricane Dorian but you don’t need a tropical system for purple skies. 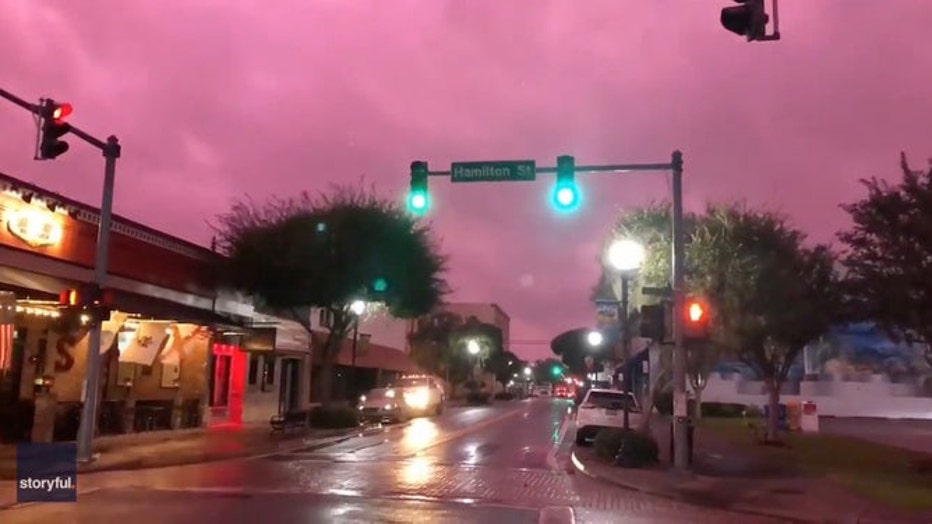 These scenes are a combination of the light scattering we've seen in the red, orange and green examples above, only this time we're mixing in sunsets and thick clouds.

After the sun sets and the "sunset" colors fade, the atmosphere usually goes back to a deep blue in the waning sunlight – what photographers refer to as the "blue hour", according to associate scientist Michael Kavulich with the National Center for Atmospheric Research. Lower clouds will take on this blue hue as well.

But if there are still some high clouds around, they can still "catch" some reds and oranges from the sun just below the horizon. Mix the red lights from above with the "blue" clouds below and you get a purple tinge!

"These conditions of a thick layer of low clouds combined with some high clouds thrown in can happen in all sorts of meteorological situations, so this isn't a phenomenon exclusive to hurricanes," Kavulich told FOX Weather. "But hurricanes often come with this specific combination of thick low clouds and scattered high clouds, especially in between outer rainbands or even within the eye where you have little or no clouds in the middle layers of the atmosphere."

ALL THE COLORS: The Aurora

You don't need sunlight for the skies to glow in color. The Northern and Southern Lights can put on a colorful display long after the sun has headed below the horizon.

7 FACTS ABOUT THE NORTHERN LIGHTS

Vivid aurora displays usually follow a few days after solar events known as coronal mass ejections or solar flares.  The flares bring a barrage of electrons that interact with oxygen and nitrogen in Earth's magnetic field that surrounds the outside of our planet. 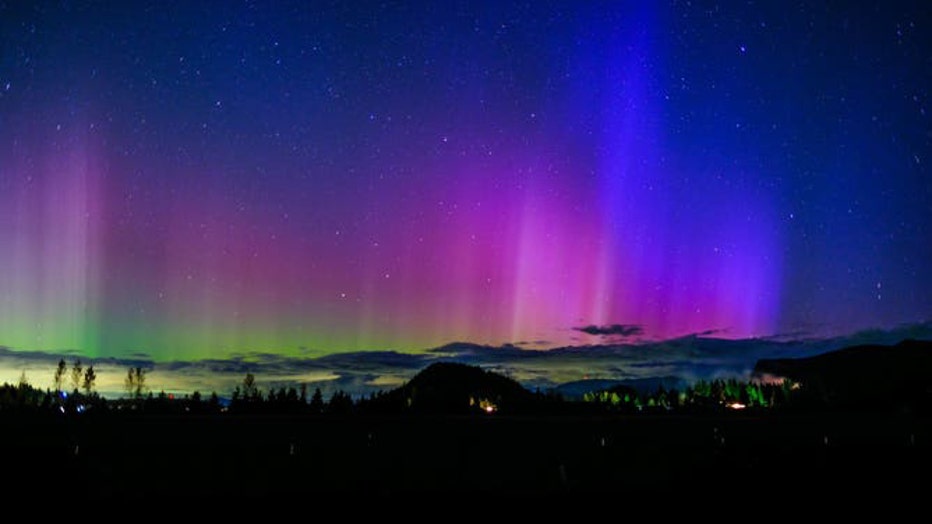 As the electrons hit the oxygen and nitrogen molecules, it "dumps in a little energy," says Don Hampton, a researcher at the University of Alaska, Fairbanks.  "And then (the molecules) relax back down to ground state. When they do that, they release a little bit of light."

The colors of the light vary on the type of gas that's energized.

Oxygen molecules give off a green or yellow glow when they are excited, or sometimes can give off a bit of a red hue, according to NASA.  Meanwhile, nitrogen will give off blue hues when hit by solar energy.

Get updates on this story at FOXWeather.com.