Evacuation orders have been lifted for the Tiger Fire, which has burned over 16,000 acres near Crown King. The lightning-caused fire is 50% contained.

CROWN KING, Ariz. - Evacuation orders have been lifted for the Tiger Fire, a 16,000-acre wildfire burning in the Prescott National Forest.

Officials with the U.S. Forest Service say the fire began with a lightning strike in the Castle Creek Wilderness on June 30.

The Yavapai County Sheriff’s Office ordered some cabins to be evacuated after a lightning-caused wildfire grew to more than 15 ½ square miles (4,040 hectares). Those evacuation orders have since been rescinded.

Prescott National Forest officials said the wildfire is burning about 11 miles east of the community of Crown King. Officials did say, however, that rain has slowed down the fire's growth.

"Remote access to this part of the forest is limiting full suppression efforts," fire officials said.

Fire officials say the area where the fire is burning features very steep areas with rough terrain. Fire crews are using aerial support to put out the fire.

The Prescott National Forest has been reopened, however, stage 2 fire restrictions remain in place.

The town of Crown King has been reopened.

One business owner in the Crown King area says she has had to close up show four times over the past year and a half.

"We have been devastated by all these fire, and our town is slowly dying," said Denyce.

The last time Denyce closed up shop was for the Tussock Fire in May. Back then, Crown King residents had to evacuate.

"I have 15 acres and my business. I have horses, ducks, chickens, dogs, cats, so there is a lot to evacuate," said Denyce.

Once she is forced to close up shop, Denyce says it takes about two months to recover. She is hopeful to be back up and running next week, and that customers can return very soon.

"Hopefully the rains will come, and everyone can come back here," said Denyce.

Timeline of the Tiger Fire

The Tiger Fire is now 59% contained.

Crown King and all roads leading to the community are now open.

"Although there is no threat of fire spread or potential growth, firefighters will continue to patrol and monitor containment lines by ground and air," officials said.

All evacuation orders will be rescinded at 8 a.m. The Tiger fire has burned 16,278 acres and is 50% contained.

The Tiger Fire is now 50% contained.

The Tiger Fire has burned 16,246 acres. The lightning-caused fire remains at 43% containment.

"Fire activity declined Sunday with increased humidity over the Tiger Fire," officials said. "Although area thunderstorms to date have not supplied significant rain on the fire, they have been a daily event in the surrounding area and have increased humidity levels. The effect has been diminished fire activity as lighter fuels absorb moisture associated with high humidity and quickly becoming less flammable and unavailable to ignite larger fuels."

The fire remained at 16,113 acres and containment increased to 43%.

Humid, stormy conditions over the past few days slowed the spread of the fire.

"After a thunderstorm Thursday night and its associated higher humidity, the fire was less active yesterday until late afternoon when fuels dried," officials said.

Crews fighting the 24.5-square-mile (63.5-square-kilometer) lightning-caused fire in southern Yavapai County were installing pumps and sprinklers and re-clearing control lines from previous fires in case the fire nears Crown King, according to a statement posted by the incident management team assigned to the fire.

"With the community of Crown King in a ‘Set' status, the town is now closed to the public," officials said. "Only residents will be allowed in and out."

Crown King moved from "READY" to "SET" status, closing the town to everyone except for residents.

"The Tiger Fire was very active yesterday," officials said. "On the north and western perimeter of the fire, the continued high temperatures and low humidity combined with burnout operations north and south along the 52 road in the vicinity of the wilderness boundary, produced a large amount of smoke during the afternoon."

More than 300 personnel have been assigned to fight the flames.

The Tiger Fire has burned 12,133 acres and remains 0% contained.

"The Tiger Fire remains active particularly on the north and west perimeters," officials said. "Crews continue to hold and enhance firelines on the south and east sides of the fire. Fire behavior may increase over the next two to three days as forecasted relative humidity decreases."

The fire grew to 9,800 acres with no containment.

Communities in the surrounding areas have been moved to READY, SET and GO phases after gusty winds pushed the fire towards Horsethief Basin and Cleator.

"Afternoon storms brought wetting rain to Horsethief Basin with some isolated showers in the interior, unfortunately more precipitation is needed to make a significant impact across the fire," officials said. "Even with some light precipitation, the fire remains active."

The Yavapai County Sheriff’s Office has ordered some cabins to be evacuated after a lightning-caused wildfire grew Sunday to more than 15 ½ square miles (4,040 hectares).

Prescott National Forest officials said the wildfire is burning about 11 miles east of the community of Crown King with no containment.

Residents of Horsethief Basin were ordered to evacuate Sunday morning with nearby areas told to prepare for possible evacuations.

Nearly 160 firefighters were working the blaze that’s believed to have started Wednesday and was at 2.6 square miles (686 hectares) as of Friday.

A Type 2 Management Team has been ordered due to outflow winds from thunderstorms near the wildfire.

The fire has scorched 5,567 acres of land with 0% containment. 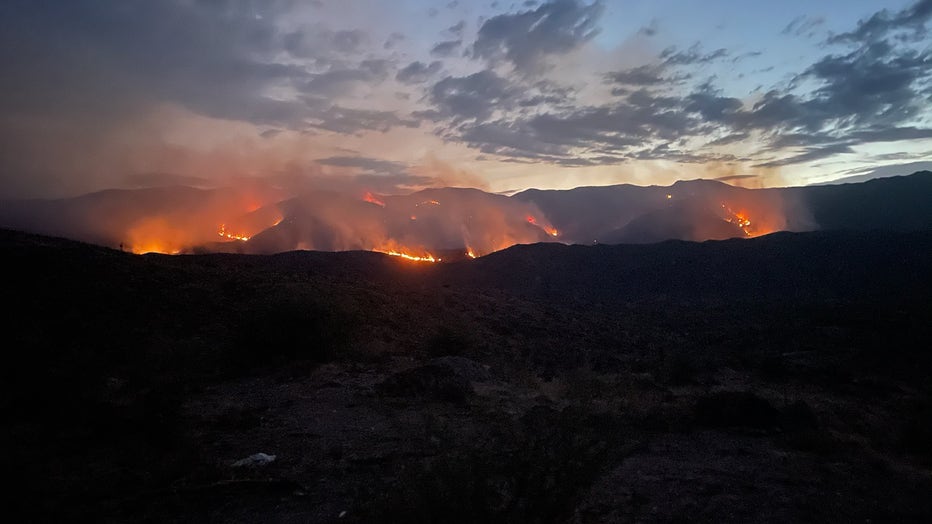