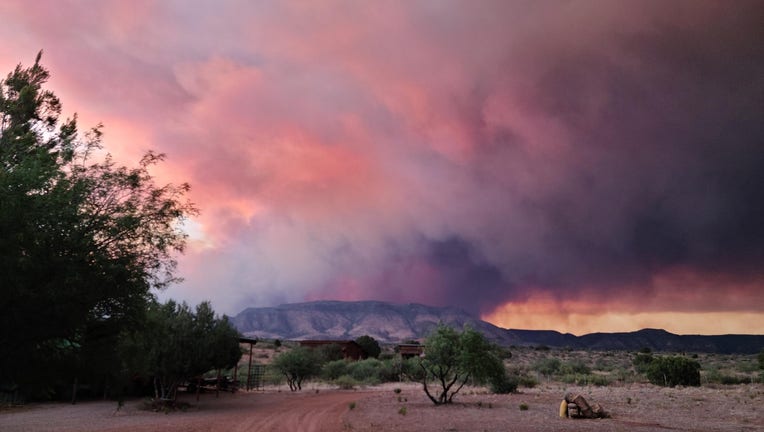 According to fire officials, the Rafael Fire was the result of dry thunderstorms that passed through the area. The fire began near Perkinsville.

Timeline of the Rafael Fire

The Rafael Fire is now 91% contained.

All communities affected by the fire are now in "READY" status.

"Today, crews will continue to patrol and mop up around the fire to secure the perimeter," officials said. "Interior areas of the fire are expected to continue to burn and there may be smoke visible as these areas continue to burn."

More progress made on Rafael Fire burning southwest of Flagstaff

The wildfire has scorched more than 78,000 acres and is now 89% contained.

Scattered showers fell across the northern half of the fire, and fire crews worked to suppress all sides of the perimeter.

The fire is now 89% contained.

"Yesterday, hand crews, with the aid of bucket drops from helicopters, worked in the Mooney Canyon area on a hot spot," officials said. "Crews continued to mop up, patrol and suppression repair activities. Fairly heavy rain fell in the area of Whiting Ranch yesterday afternoon, and a flash flood warning was issued for Sycamore Canyon – no flooding was reported."

"We want to keep that from progressing further down off the edge. The reason for that is you have Sedona, the Village of Oak Creek country over there.. all those values at risk.. looking for opportunities to go as direct as possible if conditions are safe for the firefighters if fire risk is minimized."

Officials are urging residents to follow local guidance as firefighters continue to battle this challenging fire.

For more information on evacuation status and fire activity, there will be a virtual community meeting daily at 6 p.m. until further notice on https://www.facebook.com/RafaelFireInfo.

All Arizona State Trust lands closed on June 25 at 8 a.m.

"The gusty winds and the hot, dry weather that we’re having is very unpredictable fire behavior, and we’re being very cautious about this," said Rafael Fire spokesperson Noel Fletcher, in a phone interview.

Fuel in the area includes grass, juniper at lower elevations and chaparral or ponderosa pine at higher elevations.

Residents in about 90 homes west of Flagstaff were told to evacuate because of a wildfire burning in the area. The homes are in a small community known as Garland Prairie. FOX 10's Anita Roman reports.

The fire has resulted in hazy skies in the Sedona area. Residents there said there was so much ash falling earlier in the day, that it looked like it was snowing.

More than 550 personnel are fighting the blaze as of June 25. Fletcher said due to numerous fires across Arizona, they have limited ground crews.

According to the Coconino County Sheriff’s Office, the fire department is working on back-burning the edge of the forest to prevent further spread.

"The idea is that this back-burn will burn up fuel within the area, should the main fire approach this area," said Jon Paxton with CCSO. "The hope is that it would burn this excess fuel lying around to hopefully stop it before it affects the rest of the area."

FOX 10's Anita Roman visits northern Arizona to visit with communities affected by the Rafael Fire, which has burned 36,000 acres and is uncontained.

Officials have updated the acreage burned by the Rafael Fire to 34,949 acres. The fire remains uncontained, according to the fire's Facebook page.

Nearly 200 personnel are assigned to the fire, which was caused by lightning. Officials say the fire advanced into Sycamore Canyon and moved on top to the Mogollon Rim on both the Kaibab National Forest on Sycamore Point and Coconino National Forest near Casner Mountain.

A virtual community meeting will be held at 6 p.m. on the Rafael Fire Facebook page.

The fire has burned nearly 35,000 acres and is 0% contained. FOX 10's Irene Snyder has more from Coconino County.

For some who are in "Set" mode, like Ross Taylor, they realize they may have little time to evacuate.

"With a fire like this, there’s always that danger, but this is a first for us," said Taylor, who lives on a 20-acre farm in Coconino County that is about seven miles away from where the fire is burning. "If you get a 10 mile an hour wind and it’s only seven miles away, we’ve got about 45 to 50 minutes to get ready."

Taylor has a fire hose pump all ready, just in case.

"We are taking it really seriously," said Taylor. "Won’t say we’re scared. We don’t want to lose the house though. Got a good defensible space around it."

Officials are urging people to pay attention to evacuation notices.

Many residents ready to evacuate amid Arizona wildfires

The Rafael Fire continues to grow north of Prescott and officials have ordered some evacuations. The wildfire has burned over 24,000 acres and is 0% contained. FOX 10's Anita Roman speaks with residents who say they are ready to evacuate if needed.

The Rafael Fire has burned 24,191 acres and remains 0% contained.

The Coconino National Forest closed on June 23 to the public due to wildfire activity.

The lightning-caused Rafael Fire has grown to 24,064 acres.

Just about everything’s closed thanks to multiple wildfires burning around Sedona and Flagstaff.

The Garcia family didn’t expect it when they set out on their road trip through Arizona from Texas.

"I’ve been hearing there’s a lot of fire around here," said Thomas Garcia. "Fire's pretty high, getting dangerous - we didn’t know if we needed to evacuate."

However, there's some encouraging news for the Rafael Fire around the area - the Sycamore Canyon has slowed the fire considerably.

"Yesterday was a pretty good day," said Matt McGrath, Coconino National Forest District Ranger. "Not a lot of fire growth, a couple thousand acres - not surprising with a fire like this. But we were glad we didn’t see a big run like over the weekend, with the heat, lack of humidity, and wind."

But people in that area should still be prepared to leave at a moment's notice.

"As we speak today, we do have a significant and very large area under ‘Set,’ " said Wes Dison with Coconino County Emergency Management, "I don’t foresee today based on some of the info and fire behavior we’ve seen, I’m not anticipating any ‘Go’ orders, at least in the next couple hours. I will qualify that things will change very rapidly with fires."

As of June 21, the Rafael Fire has burned 20,000 acres of land. The fire was caused by lightning, according to fire officials. FOX 10's Jennifer Martinez reports.

Emily Bean, who lives in Kachina Village, is getting ready to leave at a moment's notice.

"I'm scared. I had to leave work to come home early just to be here," said Bean. "I only packed my pictures sitting by the door. Few things really. You can't pack anything, just need clothes and go." 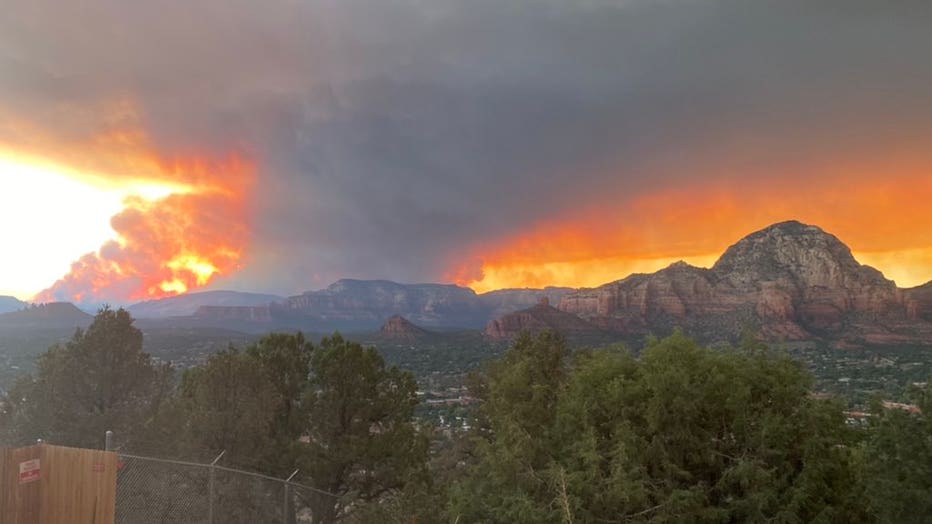 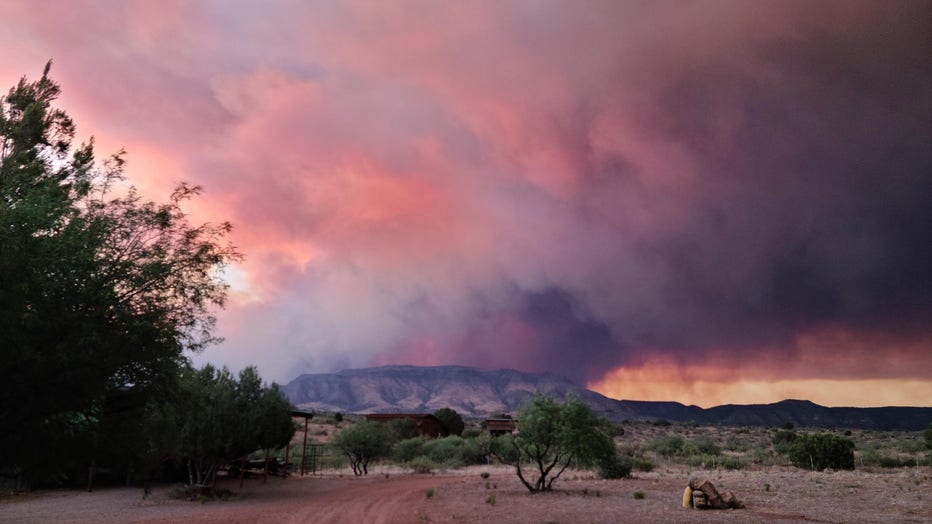 "Strong winds from the west in combination with terrain, and low humidity caused increased fire behavior [on June 20], increasing the side of the fire significantly," read a portion of the statement released by fire officials.