Caleb and Candra Pence held an outdoor wedding on May 19, 2012, in Harper, Kansas. Their ceremony had the perfect Midwest backdrop of wheat, cowboy hats and tornadoes. Credit: Lee Pence

HARPER, Kan. - Rain on a wedding day can be upsetting for any couple, but a tornado can be downright frightening during the vows.

In some cultures, rain is viewed as good luck, symbolizing various things from fertility to unity. It can also represent that your marriage will last a lifetime.

Candra and Caleb Pence would agree.

It was May 19, 2012, and the 21-year-old bride was ready to marry the man of her dreams. After all, he was a tough bull rider who was a year older with a heart of gold. 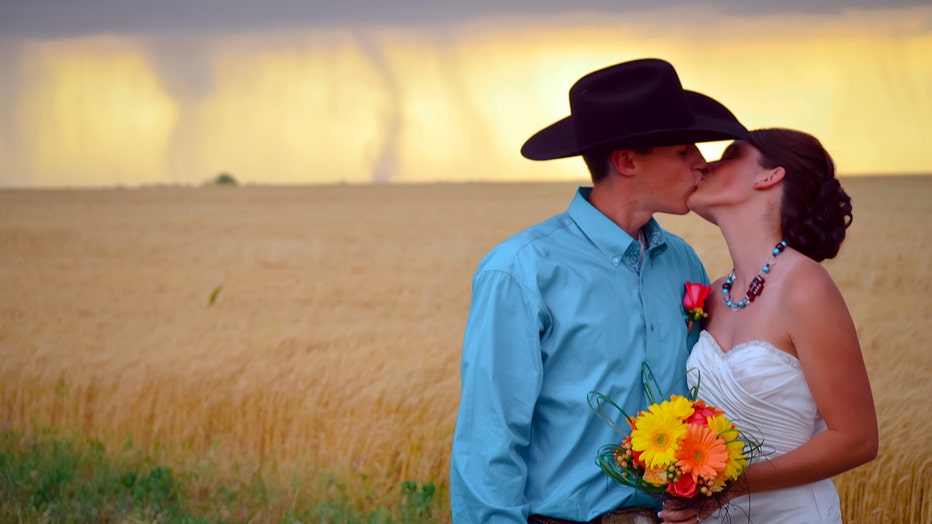 Caleb and Candra Pence pose for a wedding photo as a tornado swirls miles away from their outdoor ceremony in Harper, Kansas, on May 19, 2012. (Cate Eighmey Photography)

"He's really supportive, a go-getter. Any time he puts his mind to something, he's going to get it done, whatever that task may be," Candra Pence said.

And the events that unfolded on their wedding day nearly 10 years ago, which locals still bring up in town, are a true testament to a life of dedication.

A significant tornado outbreak occurred across portions of Kingman and Harper counties in Kansas that day. In all, nine tornadoes touched down – the strongest being an EF-3. 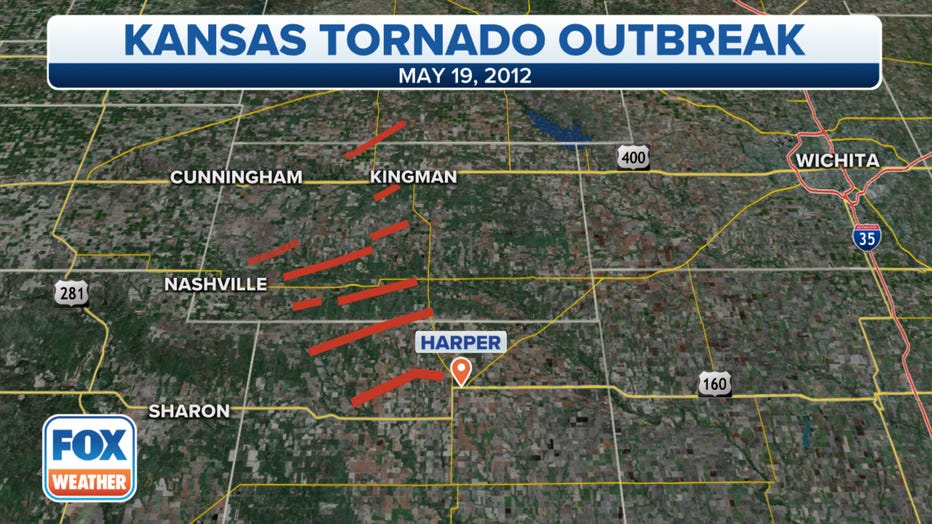 Surrounding counties experienced large hail and strong winds. There was significant damage to two farmsteads and all outbuildings were completely destroyed. Debris was strewn in all directions, the National Weather Service said.

"We actually started the ceremony a little earlier because my uncle, my dad and all of us were standing around, and we saw the one tornado forming," Caleb Pence recalled.

But growing up in southern Kansas, his family knew the funnel was tracking away from their location, so they weren't too concerned. And the same went for their 150 guests and bridal party that gathered outside the groom's family farm in the small south-central Kansas town of Harper.

"We decided to get (the wedding) going in case the wall did bring rain because there was a pretty large wall," Caleb Pence said.

However, that was the least of his worries. Little did he know he was about to marry a barrel racer who will go on to give him unwavering love, support and encouragement for nearly a decade during the ups and downs of starting a trucking company to his dedicated military service. 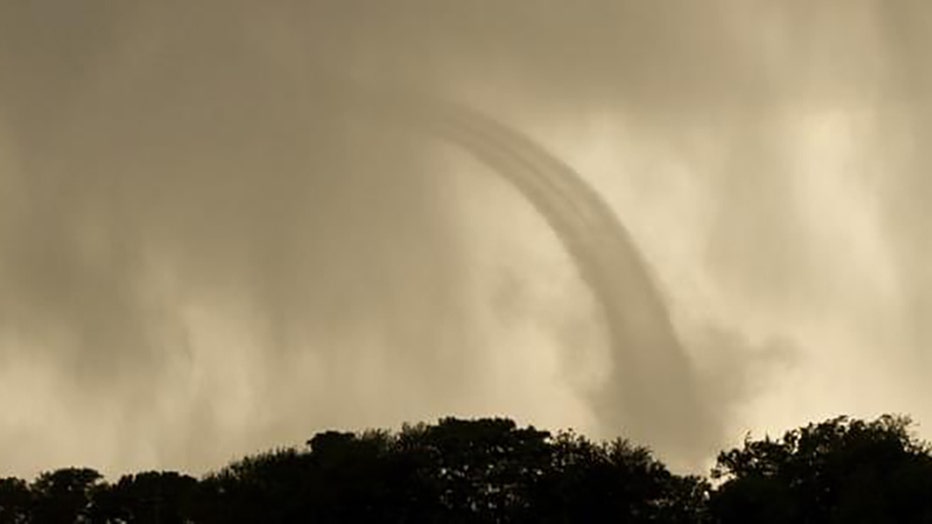 A significant tornado outbreak occurred across portions of Kingman and Harper counties in Kansas on May 19, 2012. In all, nine tornadoes touched down – the strongest being an EF-3. (Nikki Hightree)

The couple said they expect to see severe weather again when they celebrate their 10th anniversary. After all, Mother Nature has not been so pleasant each year since their wedding day.

"Up until probably the last two years … we had tornadoes every year on our anniversary. So we actually don't really care for our anniversary because it seems like something bad happens every time," Caleb Pence joked.

Traditionally, the gift of tin or aluminum is offered after 10 years, symbolizing the strength and resilience of the marriage. But Candra and Caleb Pence have far more to reflect on over the years. They welcomed a beautiful daughter into the world, something that took about four years to celebrate.

"We've almost lived half our lives together. It's hard to imagine without being together," Caleb Pence said.

The couple admits that their first two years were rough, as most marriages tend to be. But now they both have an understanding about what love is all about in a relationship.

"Everything's changed, all the way from the way we communicate to the type of love we have for each other. It's easier to say what hasn't changed," Caleb Pence said.

Looking back on that day, the couple said they wouldn't do anything different. 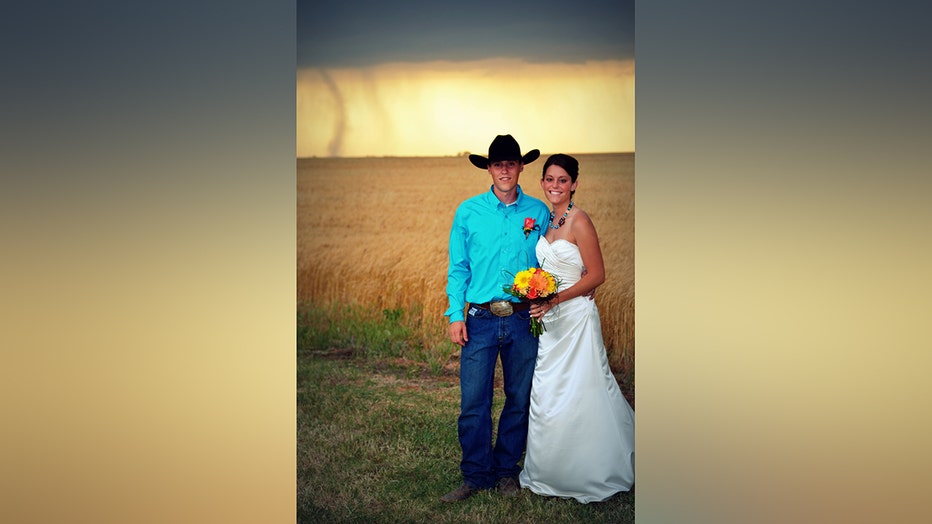 Caleb and Candra Pence pose for a wedding photo as a tornado swirls miles away from their outdoor ceremony in Harper, Kansas, on May 19, 2012. (Cate Eighmey Photography)

"I really wouldn't change a thing. I love how our ceremony was. I mean, obviously, the tornadoes were not planned, but the way everything else was … the location, it was everything," Candra Pence said.

There's an average of 1,383 tornadoes every year in the United States, with the peak of the season starting in April and extending into June, the NWS said. Most of those tornadoes occur from the Great Plains to the Midwest, an area nicknamed "Tornado Alley."

For any newly engaged couple thinking about planning an outdoor wedding during a month or in a location prone to severe weather in the forecast, the Pences offer this advice, aside from making sure tornado shelters are complete.

"Just make sure that the reception is covered. That was a game-changer for us," Caleb Pence said.

You can also track and plan your wedding day forecast in the FOX Weather app to stay informed about the weather. FOX FutureView offers an exclusive long-range planning tool that lets you track and monitor the weather nearly one year in advance.

And even though it may be hard to believe, a tornado on your wedding day is not so bad. As for this young Kansas couple, it helped bind their love for each other and symbolized their commitment for years to come.