Merrick Garland, President Joe Biden's attorney general nominee, vowed Monday to prioritize combating extremist violence with an initial focus on the insurrection at the U.S. Capitol as he sought to assure lawmakers that the Justice Department would remain politically independent on his watch.

WASHINGTON - The White House on Thursday officially withdrew the nomination of Neera Tanden to serve as director of the Office of Management and Budget from the Senate — capping off the first high-profile defeat of one of President Joe Biden's nominees.

Earlier this month, Tanden withdrew her nomination after she faced opposition from key Democratic and Republican senators for controversial tweets.

"Unfortunately, it now seems clear that there is no path forward to gain confirmation, and I do not want continued consideration of my nomination to be a distraction from your other priorities," Tanden wrote in a letter to Biden at the time.

The president, in a statement, said he has "utmost respect for her record of accomplishment, her experience and her counsel" and pledged to find her another role in his administration. 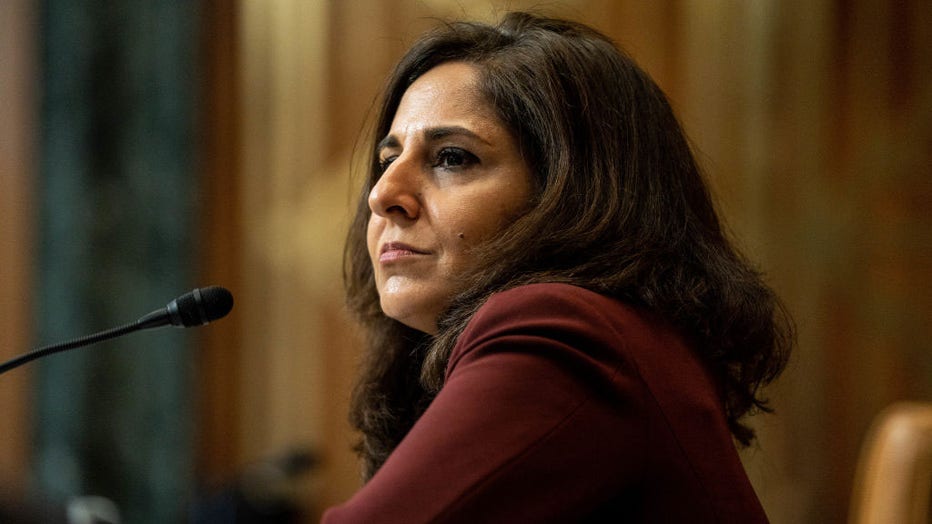 Neera Tanden, nominee for Director of the Office of Management and Budget (OMB), testifies at her confirmation hearing before the Senate Budget Committee on Feb. 10, 2021 at the U.S. Capitol in Washington, D.C. (Photo by Anna Moneymaker-Pool/Getty Im

The head of the Office of Management and Budget is tasked with putting together the administration's budget, as well as overseeing a wide range of logistical and regulatory issues across the federal government.

Tanden’s viability was in doubt after Democratic West Virginia Sen. Joe Manchin and a number of moderate Republicans came out against her last month, citing her tweets attacking members of both parties prior to her nomination.

Manchin, a key moderate swing vote in the Senate, said last month in a statement announcing his opposition that "her overtly partisan statements will have a toxic and detrimental impact on the important working relationship between members of Congress and the next director of the Office of Management and Budget."

Maine Republican Sen. Susan Collins, meanwhile, cited Biden’s own standard of conduct in opposing Tanden, declaring in a statement that "her past actions have demonstrated exactly the kind of animosity that President Biden has pledged to transcend."

Tanden had needed just 51 votes in an evenly-divided Senate, with Vice President Kamala Harris acting as a tiebreaker. But without Manchin’s support, the White House was left scrambling to find a Republican to support her.

The administration had insisted her experience growing up on welfare and background working on progressive policies as the president and CEO of the liberal-leaning Center for American Progress made her the right candidate for the moment. White House chief of staff Ron Klain initially insisted the administration was "fighting our guts out" for her.

During her confirmation hearing in February, Tanden faced pointed questions over her past comments about members from both parties as she tried to convince senators that she would leave partisan politics behind had she been confirmed for the role. Sen. Bernie Sanders, a Vermont independent and prominent progressive lawmaker, accused her of issuing "vicious attacks" against progressives.

Tanden apologized during that hearing to "people on either the left or right who are hurt by what I’ve said." Just prior to the hearing, she deleted hundreds of tweets, many of which were critical of Republicans.

So far, 21 of Biden’s 23 Cabinet nominees requiring Senate approval have been confirmed — most with strong bipartisan support.

But the president still has hundreds of other key presidential appointments to make to fill out the federal government, ranging from the head of the obscure Railroad Retirement Board to more urgent department positions such as assistant and deputy secretaries.