NEW YORK - A winter storm that had already blanketed parts of the South in snow moved into the Northeast on Friday, snarling air travel, crushing morning commutes and disrupting local COVID-19 testing sites.

"Children need to be in school. We don’t have any more days to waste" after the many closures and remote-learning days of the pandemic, said New York Mayor Eric Adams, a Democrat dealing with his first major storm after taking office Saturday.

New Jersey Gov. Phil Murphy on Thursday night declared a state of emergency, but the snow had ended by 10 a.m., allowing plows to do their thing. Preliminary snowfall amounts showed 6 inches had fallen in Berlin, with 5 inches in Howell.

The National Weather Service expected the morning commute to be hazardous, which is why the New York City Emergency Management Department issued a travel advisory.

"New Yorkers are advised to limit travel and stay inside during periods of severe weather," the Emergency Management Department said in the advisory. "If you must travel, exercise caution. Roads and surfaces may be slippery. Use mass transit if possible." 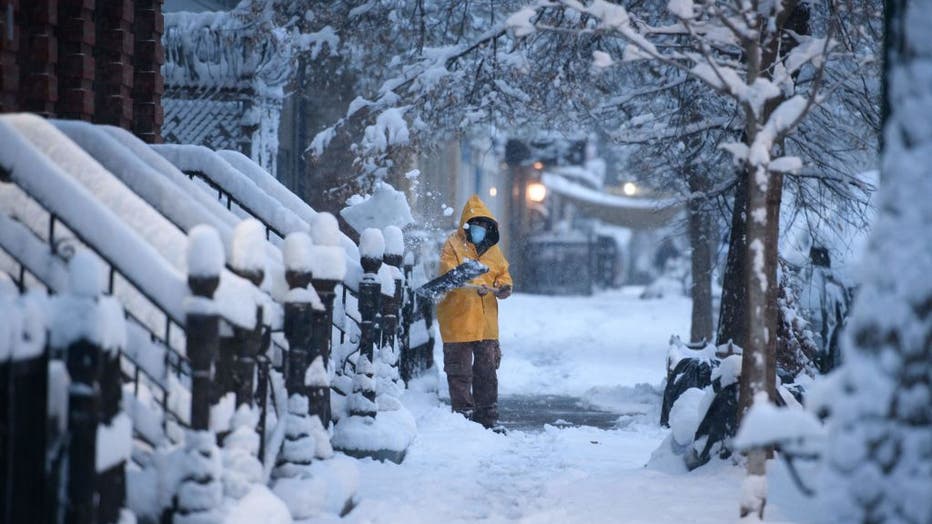 A man shovels snow on a street in the Brooklyn borough of New York during the first snow storm of the season on January 7, 2022.

Heavy snow in Buffalo set a new record picking up 14 inches of snow by Thursday afternoon, according to the NWS.

"Heavy snow at the Buffalo airport this morning has already established a record for the date," the National Weather Service tweeted.

Philadelphia and most of the suburban areas of Pennsylvania, Delaware, and New Jersey saw anywhere from 2-4 inches, as forecasters had predicted.

Around 6 a.m., FOX 29's Scott Williams says areas like Buckingham Township and Hilltown Township in Pennsylvania had each seen four inches of snow.

The storm also affected coronavirus testing sites, many of which have been overwhelmed with long lines and waits for days. Some testing sites in Rhode Island delayed their openings. In Connecticut, most state-sponsored testing sites that are usually open Fridays closed because of the storm, but some sites run locally and by pharmacies, remained open.
The storm brought record-setting snow to some areas of the South on Thursday.

The largest snowfall in Kentucky was nearly 10 inches (25 centimeters) in Lexington, according to the weather service.