MESA, Ariz. - A shopping center parking lot in Mesa was a crime scene following a double shooting on Nov. 21.

"I heard what sounded like gunshots," said Andre Garcia. "Didn't really put two and two together."

Mesa Police say around 9:30 a.m., 27-year-old Albert Leotta called 9-1-1 and reported that he and his 61-year-old mother, Antoinette Leotta, had been shot in the parking lot near Baseline and Greenfield Roads.

"Albert and Antoinette were in separate vehicles, parked next to each other. Officers arrived on scene and began life-saving measures, but Antoinette was pronounced deceased on scene. Albert was transported to the hospital with non-life-threatening gunshot wounds," stated Detective Brandi George.

"As I come out, there was someone getting chest compressions, loading someone on a stretcher," said Garcia.

"An officer assisted in identifying the truck and driver after it matched the description of a contact he made on a prior call for service. The person was identified as 65-year-old Kenneth Montgomery."

"His truck was also located near Butcher Jones Recreation Area by responding Mesa Police Officers, who saw a bloody handgun lying on the dashboard," said George.

During the investigation, police learned that Montgomery was a stranger to Albert and Antoinette.

In the police report, detectives stated that during an interview, Montgomery admitted he went to the parking lot to look for two cars, which he thought were involved in prior criminal activity. There, he approached the vehicles where he "unloaded" his gun, shooting "as many bullets" as were in his gun.

When detectives asked Montgomery if he intended to kill the victims, he said, "God damn right, anybody would have."

According to the police report, Montgomery said he did not feel guilty about shooting the victims, and he decided to shoot them earlier that morning after he was contacted by police during an unrelated call.

Besides the woman, her son was also injured in the shooting. FOX 10's Linda Williams reports. 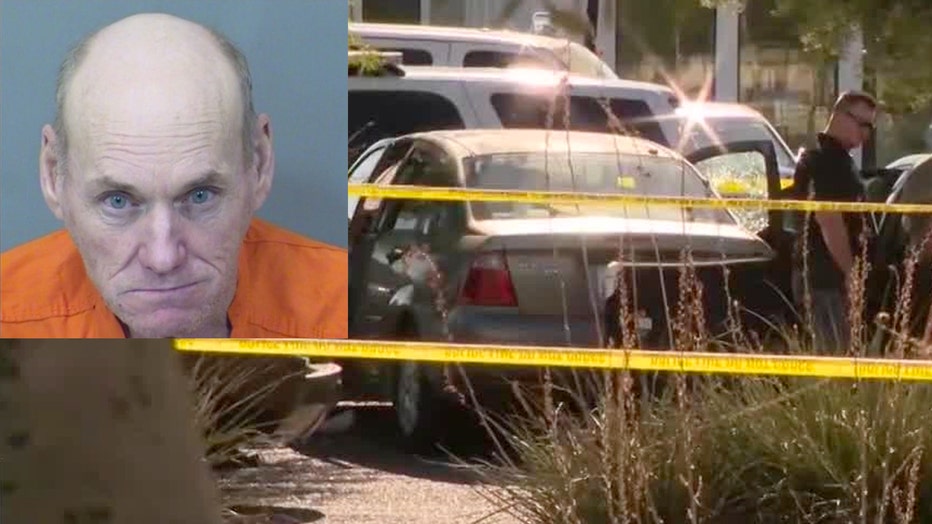