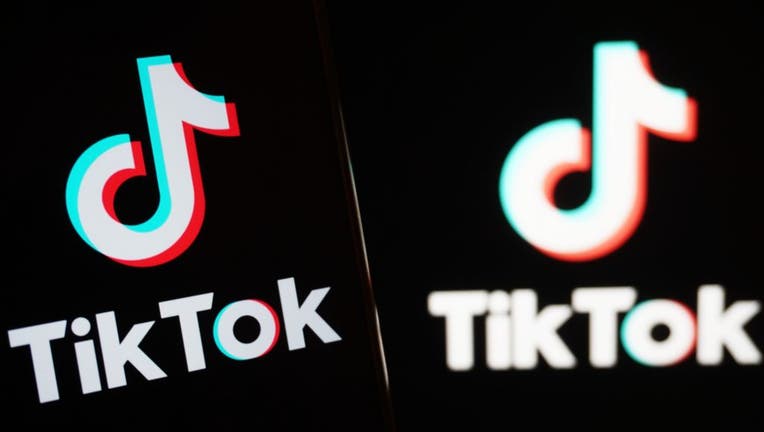 The logo of TikTok is pictured in a file image dated July 20, 2022. (Photo credit: CFOTO/Future Publishing via Getty Images)

Makayla Musick is one of many mothers who have recently informed their followers that they are done sharing public content of their kids online.

"I just saw the posts on Tiktok and was absolutely appalled by the story and had decided that I needed to protect my daughter," she told Fox News Digital.

The 3-year-old TikTok star at the center of the movement, with the username @wren.eleanor, has more than 17 million followers on the short-form video app run by her mother, Jacquelyn. The account consists of seemingly innocent photos and videos of Wren — a blonde-haired, rosy-cheeked toddler doing normal toddler activities — as well as some sponsored content.

But Wren’s mother began deleting some content once her followers and other TikTok sleuths noticed that certain videos were being saved by other users in numbers that sparked concern. The "save" feature allows users to tag videos, so they are easier to find and refer back to.

One user, @hashtagfacts, noted that a video of Wren wearing a cropped, orange shirt was saved more than 45,000 times. A video of Wren eating a hotdog was saved nearly 375,000 times. She also highlighted unsettling comments on Wren’s videos and pointed out that popular searches for Wren’s account included phrases like "Wren Eleanor hotdog" or "Wren Eleanor pickle," meaning users were frequently searching for videos of the three-year-old eating a hotdog or pickle. Similar popular searches for Wren appeared on Google.

And not only can videos and photos be saved on TikTok and other social media accounts, but predators can also use a smartphone's screen-recording feature to record or screenshot content directly to their phones without being traced.

KAYLEE JONES, 16, MAY BE IN ‘DANGEROUS SITUATION’ AFTER TALKING WITH STRANGERS ONLINE, EXPERT SAYS

Since users took note of the abnormal activity on Wren’s account, some moms, like Musick, have taken it upon themselves to delete photos of their children on public social media profiles.

"Wren's story brought a lot of light to all the sick people in the world," the mother explained in an interview with Fox News Digital. "So, I decided to remove my own daughter's photos from anyone who is not close family/close friends. My duty as her mother is to protect her from things like this. I took the initiative to remove her photos before anything like Wren's situation could happen to my own daughter."

Musick was both surprised and unsurprised by the concern over Wren’s account because she has "always known there were sick people in the world that do these kinds of things." She looks at social media in a different light now and "won't be posting" her daughter's content on social media "until she’s way older."

CHILDREN’S MENTAL HEALTH MAY SUFFER IF THEY SPEND TOO MUCH TIME ON ELECTRONIC DEVICES, STUDY SUGGESTS

Calahan Walsh, executive director of the National Center for Missing & Exploited Children (NCMEC) and son of "America’s Most Wanted" host John Walsh, told Fox News Digital that while social media has become "such a pervasive part of our lives," people who use social platforms like TikTok, Facebook, Instagram and others "are drawn into this false sense of security" due to the positive interactions they have with friends, family and strangers who follow their accounts with good intentions.

"But parents have to understand that when you're putting this information out to the public, you're opening up your world to the entire outside world," Walsh said. "And anybody on these social media platforms — especially if your, if your page is public — Anybody in the entire world can view and consume the content that you're putting out there and…"

Online predators, often anonymous and difficult to trace, seek content that typical users may not realize is harmful because they do not "go directly to that dark place," Walsh explained.

"That's what these predators are searching for," he said. "And because you're putting that content up on social media, and you're the ones sharing it, it's not like they're the ones creating… that type of content. They're just consuming it."

Once predators get away with consuming material online, it is not out of the question for them to begin targeting children directly online or in person, according to the NCMEC executive director.

One of the first rules NCMEC teaches children who are just beginning to use the internet through its NetSmartz program is to never share too much personal information. Personal information can include everything from a child’s location to seemingly innocent photos and videos of a child that online predators from around the world — who are not necessarily subject to U.S. laws — use for nefarious purposes.

Predators who find accounts belonging to minors can coerce those minors into sharing photos and videos of themselves and then groom them to start taking and sharing more proactive content over time — often by posing as other minors.

"It's all done on the phone. And those phones go with our children in the bedroom at night and the bathroom," Walsh explained. "It's not the family computer out in the living room. And so whether it's content that parents are putting out or where parents are just allowing their child to self-create any type of content, it's very dangerous because we see individuals who prey on children who will try to coerce that child to make sexually explicit content, self-produced content, and send it to that exploiter."

That "opens up the child to even more types of exploitation, grooming, luring, sextortion, online, enticement — all those things," he said. And once the grooming begins, so can threats. What may begin as a predator asking a child for one photo can turn into a predator asking a child for multiple inappropriate photos or videos by using threats. They then collect and share that content "like playing cards."

"It may start with taking a shirt off, you know, some article of clothing," Walsh warned. "But once that predator has that child and says, ‘Hey, look, I've saved this image, I'm going to share it with all your friends, all your family. I'm going to ruin you, embarrass you at school. Your parents are going to hate you. Nobody's going to be your friend anymore unless you send me…this image of you doing X, Y and Z,’ a ramp up of what the original content was. And those children are now locked in to the situation where there is fear. They're in fear of being exposed. They're in fear of being embarrassed. And so they will comply with the requests of this person who's extorting them and provide them with additional content."

Parents need to be aware of what predators are looking for on public profiles and avoid posting the kinds of content that bad actors consume, without consequence, on social media. They also need to teach their children about the dangers of sharing too much personal information with strangers online, according to Walsh.

"Think twice. Trust your gut. Understand there's bad people out there. Try to keep your kids safe," he concluded.