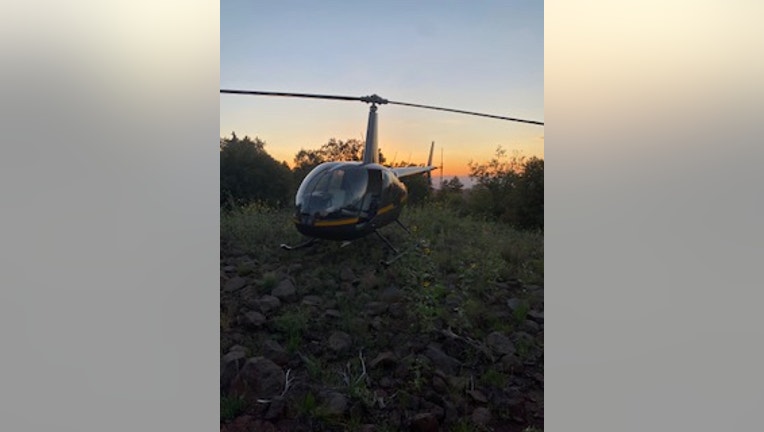 Officials with the Yavapai County Sheriff's Office say two hikers in distress had to be taken to safety by foot after an incident involving the department's rescue helicopter.

According to a statement released on Aug. 31, the incident happened on the evening of Aug. 27, when YCSO received a call that two hikers were in distress on Pine Mountain.

The helicopter's pilot, according to officials, found the hikers near their last known coordinates, and looked for about half an hour for a place to set the helicopter down.

The hikers, officials say, were dehydrated, and decided they wanted to be airlifted off the mountain.

"Though during lift-off there were no problems, the helicopter began to lose power when it was approximately 3 – 5 ft in the air, necessitating the need to put it back on the ground," read a portion of the statement.

The helicopter, officials said, was pushed 20 feet into as dangerous area with bigger boulders and trees due to wind, and the helicopter's rotor also hit a tree. Power to the helicopter fully failed after that.

"Yet, the pilot was able to safely land with no injuries to those aboard," read a portion of the statement.

DPS was called to assist in completing the rescue, according to officials, but they were unable to conduct the rescue due to increased winds.

The pilot of the helicopter that went down, according to YCSO officials, decided to get the hikers off the mountain by hiking out the eight miles with them to safety.

"The hikers stated that they believed the pilot saved their lives and were grateful for all he did for them," read a portion of the statement.

"Our dedicated [Search and Rescue] teams put their safety in second place when they are out there trying to rescue those in need. I am very glad everyone in this circumstance ended up home safely," said Yavapai County Sheriff David Rhodes, in the statement.

Officials with YCSO also reminded people to bring water and other provisions when hiking.