Bridger Walker saved his 4-year-old sister when he stood between her and a charging dog.

CHEYENNE, Wyo. - After a heroic little boy named Bridger Walker saved his little sister from a dog attack, another hero reached out to the 6-year-old with a sweet video message.

“I read your story and saw what you did. Now, I’m sure you’ve heard a lot of this over the last couple days, but let me be the next one to tell you, pal, you’re a hero,” said “Avengers” star Chris Evans in a video message. The video was shared July 15 by Bridger’s aunt, Nicole Noel Walker, on Instagram.

“What you did was so brave, so selfless — your sister is so lucky to have you as a big brother. Your parents must be so proud of you,” Evans said, who added that he was going to send the boy an “authentic Captain America shield because pal, you deserve it.“

On July 9, Bridger saved his 4-year-old sister from a dog attack in Wyoming by standing in between her and the charging German Shepherd mix. The boy was badly injured and received roughly 90 stitches to his face.

“After getting bit several times on the face and head, he grabbed his sister’s hand and ran with her to keep her safe. He later said, ‘If someone had to die, I thought it should be me',” his aunt wrote on Instagram.

Her post on Instagram about Bridger’s courageous encounter with the dog was liked by more than 1 million people and drew thousands of comments from people praising his actions. 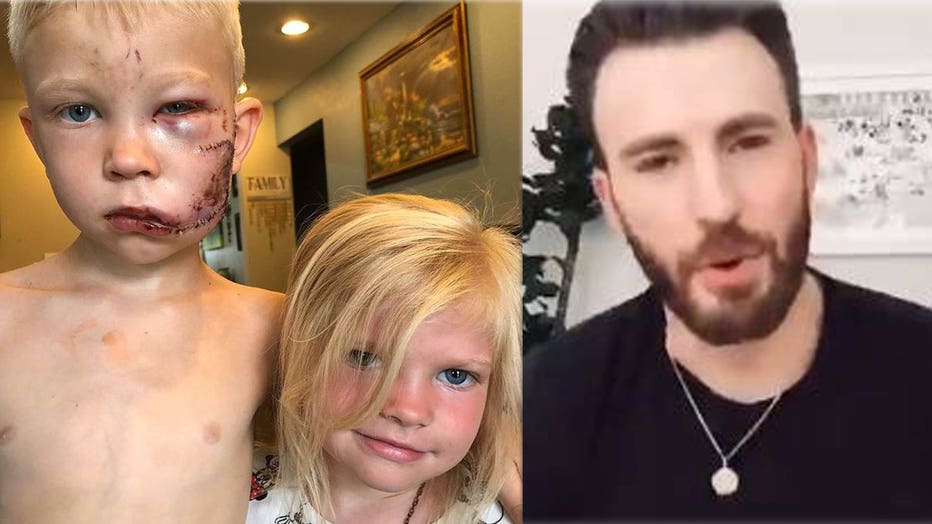 Bridger Walker, 6, is pictured with his younger sister after the dog attack with roughly 90 stitches in his face, alongside a screengrab of actor Chris Evans who sent a video message to the young boy praising him for his bravery. (Photo credit: nicol

“People who put the well beings of others in front of themselves are the most heroic and thoughtful people I know,” Ruffalo wrote in part, who played Hulk in “The Avengers” film series. “I truly respect and admire your courage and your heart. Real courage isn’t dominating people or fighting against people or walking around like a tough guy. Real courage is knowing what is right to do and doing it even when it might end up hurting you somehow.”

“The love and support we have received astounds us,” the family added in a statement.