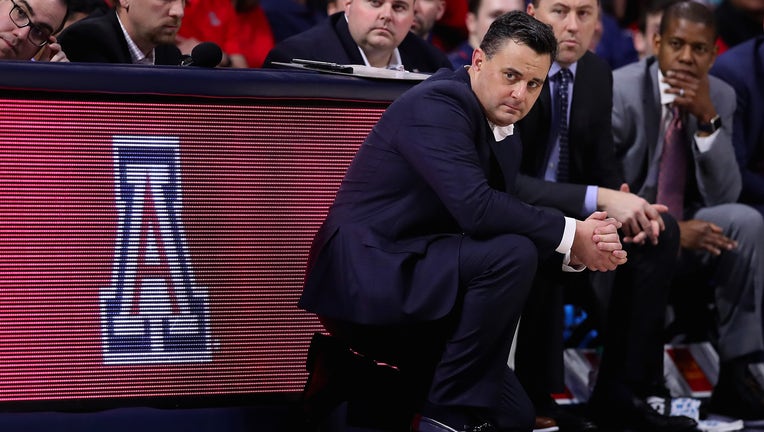 TUCSON, ARIZONA - JANUARY 16: Head coach Sean Miller of the Arizona Wildcats watches from the sidelines during the second half of the NCAAB game against the Utah Utes at McKale Center on January 16, 2020 in Tucson, Arizona. (Photo by Christian Peters

TUCSON, Ariz. (AP) - The University of Arizona has received a formal notice of allegations from the NCAA stemming from a federal investigation into shady recruiting practices three years ago.

The university acknowledged in a statement Friday it had received the notice.

“However, in order to protect the integrity of the ongoing enforcement process, the University is not releasing the NOA at this time,” the university said.

Arizona had been in the NCAA’s crosshairs since 2017, when assistant coach Emanuel Richardson was among 10 people arrested as part of a federal corruption investigation into college basketball.

Richardson was fired by the university and later pleaded guilty to accepting $20,000 in bribes from aspiring business manager Christian Dawkins. He was sentenced to a three-month prison sentence in 2019.

“I’m not going to comment on anything that is around any investigation. That’s what I’m called to do as a member of our athletic departments, so I’m unable to comment,” he said.

Miller sat out a game in 2018 after ESPN reported he was heard on an FBI wiretap discussing a $100,000 payment to future No. 1 overall NBA pick Deandre Ayton. Miller vehemently denied the report and university President Robert C. Robbins announced a few days later that Miller would remain the Wildcats’ coach.

Oklahoma State was the first school to be punished by the NCAA in the wake of the federal probe. In early June, the Cowboys were banned from the 2021 postseason and received numerous other penalties after the NCAA infractions committee found former Oklahoma State assistant coach Lamont Evans accepted up to $22,000 in bribes to steer athletes to certain financial advisers.

The NCAA issued charges against Kansas last September. That case, involving five Level I violations, was accepted in July into the new Independent Accountability Resolution Process. Cases involving North Carolina State and LSU have also been recommended to the IARP.

Louisville responded to NCAA allegations last month and Southern California, TCU and South Carolina have been charged with violations stemming from the FBI investigation.

Alabama, LSU, Creighton and Auburn also were connected to the probe.