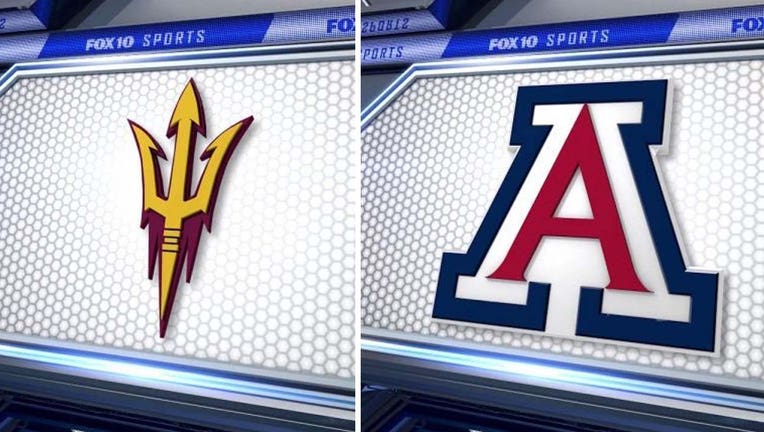 TEMPE, Ariz. (AP) - Arizona State jumped on its biggest rival early and kept it going until late in the third quarter, pushing the lead to 14 points.

The Sun Devils knew Arizona would have a response — and were ready for it.

"Just toughness, the resolve that we weren’t defeated," Arizona State coach Charli Turner Thorne said. "We’ve been down plenty this year in big games and come back and won. It’s the confidence in their defense right now. It’s a one-point game, we’ll get a stop."

The Sun Devils (12-8, 4-3 Pac-12) dominated through three quarters, building a 14-point lead while keeping the Wildcats mostly in check.

The Sun Devils missed two shots on the next possession and Arizona got the ball to Pellington, but she was called for an offensive foul.

Giles then hit two free throws and Pellilngton shot an airball 3-pointer with 3 seconds left. Loville sealed it by hitting 1 of 2 free throws. Arizona State went 31 for 34 from the free-throw line in a foul-filled game.

Pellington finished with 30 points and Cate Reese added 18 for Arizona.

"They handed it to us from the get-go," Arizona coach Adia Barnes said. "They had more intensity, played with with a sense of urgency, guarded us, hit shots. We never responded."

Arizona State also has a bit of confidence after beating the Wildcats 66-64 in overtime last season in Tempe and sweeping the Oregon schools last week.

The Sun Devils carried it over into the start against their rivals behind Loville.

The Boise State transfer hit all four of her shots to score 12 points in the first quarter, and Arizona State turned six offensive rebounds into eight second-chance points.

The Sun Devils shut the Wildcats down and had a good offensive flow in the second quarter, using a 12-0 run to take a 42-34 halftime lead.

"We had to start with a punch and make a statement because it’s our home court, so we take it personal," said Arizona State’s Taya Hanson, who had 19 points.

Arizona found a better offensive rhythm in the third quarter and tried to make a run at the Sun Devils, but was still down 61-52 despite hitting 6 of 12 shots.

The Wildcats had one last run in them.

Arizona turned up the defensive pressure and Pellington scored six straight points to cut Arizona State’s lead to three. Reese hit a 3-pointer and scored on a layup on consecutive possessions to put the Wildcats up 73-70, but the Sun Devils were able to grind out the win.

"Things we are usually pretty good at, we were not tonight and we lost," Barnes said. "We deserved to lose."

Arizona had numerous defensive breakdowns and was outrebounded by 15 to lose for the fourth time this season.

Arizona State grinded the game down the way it needed to and crushed the Wildcats on the glass to win its second straight rivalry game in Tempe.

Arizona has been good at sharing the ball most of the season, but played a lot of one-on-one as players tried to make plays to erase the early deficit. The Wildcats finished with 10 assists on 25 made field goals and had 11 turnovers.