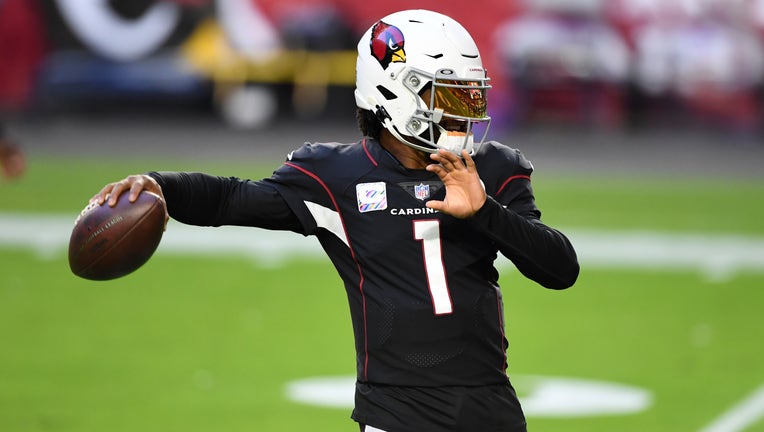 GLENDALE, ARIZONA - OCTOBER 25: Kyler Murray #1 of the Arizona Cardinals prepares for a game against the Seattle Seahawks at State Farm Stadium on October 25, 2020 in Glendale, Arizona. (Photo by Norm Hall/Getty Images)

SEATTLE - There was very little time for Kyler Murray and DeAndre Hopkins to enjoy the wave of celebration after one of the great game conclusions in Arizona Cardinals history.

Too much is at stake Thursday night when the Cardinals travel to Seattle.

The heroics of what Murray and Hopkins pulled off last Sunday with a last-second desperation touchdown for a 32-30 victory over Buffalo created the opportunity for Arizona to take control of the NFC West race if it can win in Seattle for the fifth time in the past six seasons.

The matchup is a massive game for both teams in what has become a three-team race in the NFC West with both Seattle and Arizona tied with the Los Angeles Rams on top of the division.

For Arizona, a victory would give it the season sweep of the Seahawks for the first time since 2009 and a one-game lead over Seattle.

For Seattle, a win would settle a rocky recent stretch, avoid the team’s first three-game losing streak since 2011, and be a major boost heading into an upcoming four-game stretch against teams with combined 8-28-1 records entering this week.

“We’re going to have to work our way back,” Seahawks coach Pete Carroll said. “I know that we’re all tied right now and so that just makes the point of every game being a championship game more clear.”

Seattle’s concerns go beyond its two-game losing streak. Its defense continues to be problematic, but an additional issue has emerged in recent weeks in the play of quarterback Russell Wilson.

Once the leading candidate for the MVP award, Wilson has dipped ever since the earlier loss to the Cardinals. Including that game, Wilson has committed 10 turnovers and made the kinds of mistakes the Seahawks can’t afford with the issues on the other side of the ball.

Wilson is 32-9 in his NFL career coming off a loss and hasn’t lost three straight games since his sophomore year in college at North Carolina State.

Seattle’s offense should get a boost with the return of running back Carlos Hyde. Both Hyde (hamstring) and Chris Carson (foot) were hurt in the Week 7 game against Arizona and Seattle’s offensive balance has been off in the weeks since. Carson is listed as questionable.

Hyde had a season-high 68 yards rushing and a TD against Arizona in the first meeting.

Seattle also should have wide receiver Tyler Lockett available despite a knee injury. Lockett had a career-high 15 catches for 200 yards in the first game.

The Cardinals are averaging nearly 169 yards rushing per game, which leads the NFL. Murray and running back Kenyan Drake are on pace for 1,000-yard seasons, while backup running back Chase Edmonds is on pace for more than 500.

“This offense is at its best when you’re running the ball,” Murray said. “When you can run the ball it just opens up everything else.”

Seattle welcomed safety Jamal Adams back to the lineup last week, only to see him suffer a shoulder injury that left him playing with one arm. Adams is expected to play, but the Seahawks will still be without starting cornerbacks Shaquill Griffin and Quinton Dunbar.

Cardinals rookie linebacker Isaiah Simmons is quickly becoming a bigger part of the defense and has had four tackles in each of his past two games.

His biggest moment of the season came against Seattle on Oct. 25 when he had an interception in overtime that helped start the winning drive.

The No. 8 overall pick from Clemson struggled in the first few games to adjust to the NFL. Coaches and teammates said a limited offseason because of COVID-19 protocols made it a tough transition.

Simmons’ improvement comes at a good time because the defense is dealing with several injuries, having already lost Chandler Jones and Corey Peters for the season.