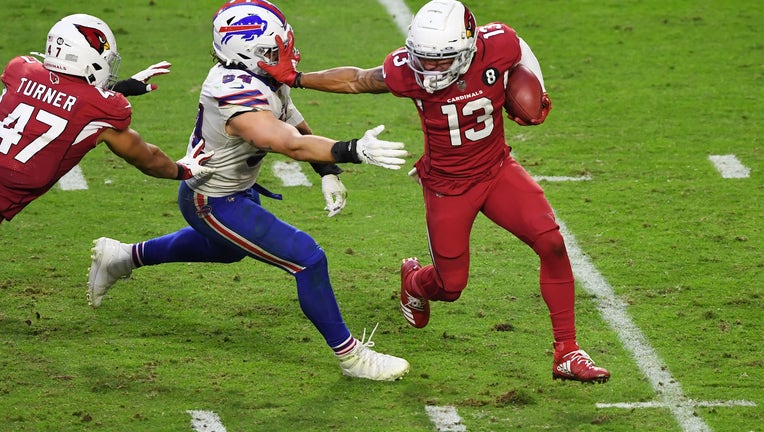 GLENDALE, ARIZONA - NOVEMBER 15: Wide receiver Christian Kirk #13 of the Arizona Cardinals stiff-arms linebacker A.J. Klein #54 of the Buffalo Bills during the second half at State Farm Stadium on November 15, 2020 in Glendale, Arizona. (Photo by Nor

GLENDALE, Ariz. (AP) — DeAndre Hopkins knows that football fans might view his final, winning catch on Sunday as some sort of miracle. Even the players and coaches for the Arizona Cardinals couldn’t hide their disbelief when he jumped over three Buffalo defenders and came down with the ball.

But the three-time All-Pro insists there was no magic needed. Just skill.

And that’s exactly what the Cardinals did. Kyler Murray completed a stunning 43-yard desperation pass to Hopkins with 2 seconds left to lift Arizona to an improbable 32-30 victory over the Bills.

The catch was as sensational as the throw, which was quickly dubbed a “Hail Murray.”

The game appeared lost for the Cardinals until Murray rolled out to his left as the seconds ticked off the clock. He flung the ball toward the end zone, where Hopkins was waiting with three Buffalo defenders draped all over him. Somehow, the three-time All-Pro came down with the ball, and the Cardinals started a wild celebration in the end zone.

“Just to get the pass off was incredible,” Cardinals coach Kliff Kingsbury said. “If you watch the play, he is running and dodging and ducking. I didn’t think he would get it off. Then to put that kind of incredible loft to give him a chance. From my vantage point I couldn’t see much. Just the crowd going crazy.”

Josh Allen threw a 21-yard touchdown pass to Stefon Diggs with 34 seconds left that looked like it would win it for the Bills (7-3). But Murray and the Cardinals (6-3, tied for the NFC West lead) ended the Bills’ winning streak at three games with the improbable throw and catch.

It was a crazy ending to another entertaining Cardinals game, which usually have come down to the final seconds in recent weeks. Murray threw for 245 yards, one touchdown and one interception. Hopkins had seven catches for 127 yards — and he’ll remember the last one for a long, long time.

“It was on three people. They were in position. It was just a better catch by I,” Hopkins said.

The Cardinals trailed 23-9 midway through the third quarter but responded with two touchdown drives sandwiched around a field goal to take a 26-23 lead by the beginning of the fourth. Murray, wearing bright yellow cleats, ran for both of the touchdowns, including a 15-yard dash up the middle that gave Arizona its first lead of the day.

“He is playing at a ridiculous level,” Kingsbury said. “You have seen it the last few weeks after that first month. Offensively, we have really settled in. Mixing in tempo making great decisions whether it is with his feet, his arm. It is fun to watch.”

Allen was having a mediocre game until the late drive that lasted 12 plays and went 73 yards. The quarterback capped the series with a perfect throw to a diving Diggs, who finished with 10 catches for 93 yards. But it wasn’t enough for the Bills, who couldn’t stop Hopkins in the end zone.

“Yeah, I thought we guarded it pretty well,” Bills safety Jordan Poyer said. “We had three people around him .... It’s really not a whole lot of anything else to say, just got to find a way to get that ball out of his hands some way, somehow.”

Allen completed 32 of 49 passes for 284 yards, two touchdowns and two interceptions. Cole Beasley had 11 catches for 109 yards and a touchdown.

Buffalo pushed ahead 23-9 when Allen hit Beasley for a 22-yard touchdown after Arizona’s Kenyan Drake lost a fumble.

But the Cardinals responded with a nine-play, 85-yard drive that ended with Murray’s 1-yard touchdown run. Zane Gonzalez followed with a 45-yard field goal and Murray ran for a 15-yard score for the 26-23 lead.

Allen handed the ball off to Isaiah McKenzie, who then turned and threw it back to the quarterback, who ran 12 yards for Buffalo’s opening score. Allen is the 11th Buffalo player to catch a touchdown pass this season, a franchise record.

Tyler Bass added field goals from 58, 55 and 54 yards for a 16-9 halftime lead. The rookie’ 54-yarder bounced off the right upright before going through for three points. They were the three longest field goals of his short career.

The Cardinals had a frustrating first half with 206 total yards but zero touchdowns. Gonzalez made field goals from 23, 42 and 21 yards.

Murray has run for at least one touchdown in five consecutive games to tie a franchise record. He’s the first quarterback in the NFL to do it since Green Bay’s Tobin Rote in 1956.

Bills: Four players missed the game when put on the reserve/COVID-19 list, including cornerback Josh Norman. ... LB A.J. Epenesa left in the first half and was evaluated for a head injury. ... CB Dane Jackson (knee) left in the third quarter.

Bills: The Bills enter their bye week, play again Nov. 29 at home to the Chargers.