GLENDALE, Ariz. - Kyler Murray burst through the locker room door Thursday morning, marched up to the podium for an impromptu media session, and declared that there have been no "shortcuts" to success during his football career, no matter what strange addendums are on his new contract.

Then the Arizona Cardinals quarterback paused and grinned for a moment: "No pun intended."

In a rare show of public emotion, the 5-foot-10 Murray vociferously defended his study habits a few days after the NFL Network reported there was a unique addendum to his $230.5 million, five-year contract that mandates at least four hours of "independent study" during game weeks each season.

It also says the quarterback can’t be distracted by "watching television, playing video games or browsing the internet."

Murray — just like every quarterback who has ever played at a high level — is used to criticism about his game. That’s part of the territory. He’ll take heat for a bad throw, bad decision, bad body language or even his average genetics in the height department.

But his work ethic?

"To think I can accomplish everything I’ve accomplished in my career and not be a student of the game, and not have that passion and not take this serious, it’s disrespectful and almost a joke," Murray said. "I’m honestly flattered that y’all think that, at my size, I can go out there and not prepare for the game and not take it serious."

So that begs the question: Why was the addendum needed in the contract?

The addendum was unexpected for several reasons, including that coach Kliff Kingsbury and teammates have never voiced public displeasure with Murray’s preparation for games. The quarterback has certainly had a few bad games during his three-year pro career, but knowledge of the playbook was never in question.

Even Green Bay quarterback Aaron Rodgers was surprised when he heard about Murray’s study mandate.

"I think I just raised my eyebrows up like this," Rodgers said, demonstrating. "That was the reaction. Yeah, I was happy to see him get paid. One thing I did see was I think his average salary per year was about on par with the salary cap of the Oakland Athletics, so I think he can definitely smile knowing he made the right choice."

Murray — and the team — have endured a lot of criticism and jokes over the past few days. Fans and pundits have wondered why the Cardinals would spend nearly a quarter-billion dollars on a quarterback if there are questions about his study habits.

Murray said there’s nothing wrong with the way he prepares. Teammates seemed to agree, with tight end Zach Ertz saying that "Kyler knows the playbook better than anyone on this team."

"But I do enjoy and love the process of watching the game with my guys, the quarterbacks, my coaches."

The No. 1 overall pick in the 2019 draft out of Oklahoma, Murray took time on July 28 to list his ample accomplishments on the football field over the past decade, from a 43-0 record in high school, to a Heisman Trophy at Oklahoma to his Pro Bowl selections in the NFL.

He said none of that would have happened if he didn’t have a good work ethic. 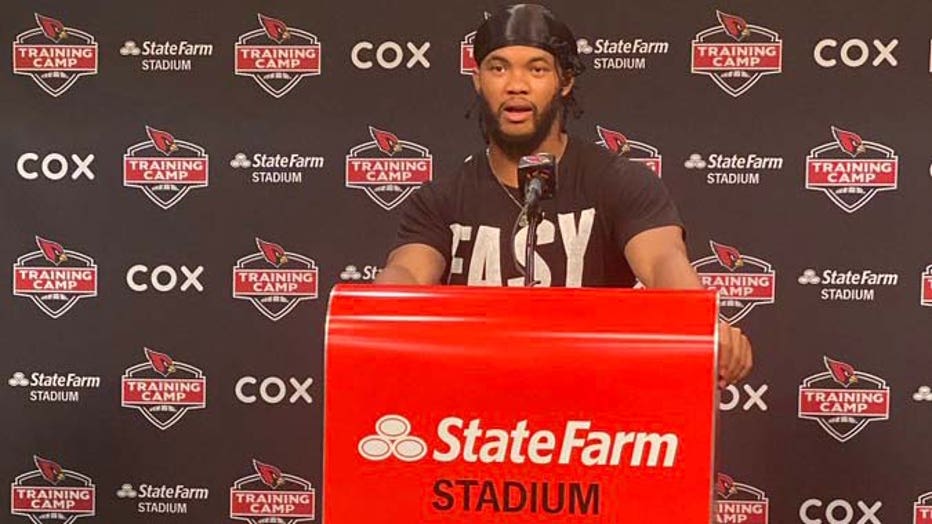