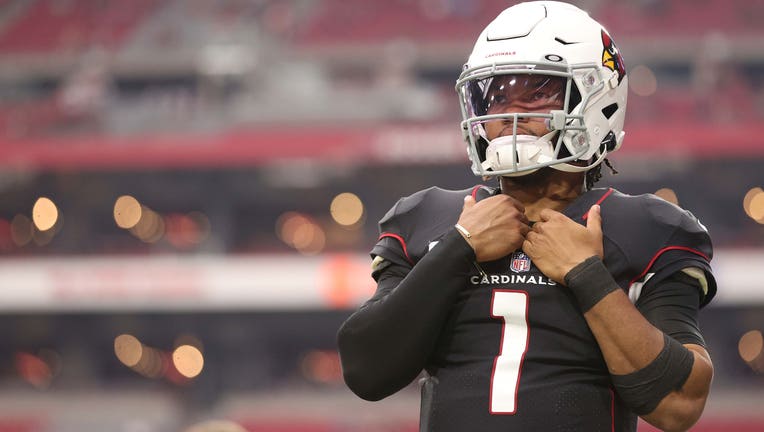 GLENDALE, ARIZONA - OCTOBER 10: Kyler Murray #1 of the Arizona Cardinals warms up prior to the game against the San Francisco 49ers at State Farm Stadium on October 10, 2021 in Glendale, Arizona. ( Photo by Christian Petersen/Getty Images)

PHOENIX - Kyler Murray's new $230 million contract with the Arizona Cardinals includes an interesting clause – an "independent study" addendum that requires the quarterback to study game film for four hours per week during the season.

The NFL Network reported that should Murray not be in compliance with the addendum, he risks losing credits if there are certain distractions during his study time, including watching television, playing video games, or surfing the internet.

During an interview with the New York Times late last year, Murray said he's "not one of those guys that's going to sit there and kill myself watching film."

"I think I was blessed with the cognitive skills to just go out there and just see it before it happens," Murray said.

Murray officially signed his new contract on July 25 following a months-long contract dispute. At one point, Murray wiped his social media accounts of all references to the Cardinals and it wasn’t clear whether the franchise was ready to make a long-term investment.

Murray, a two-time Pro Bowler, was taken No. 1 overall by the Cardinals in the 2019 NFL Draft.

The Cardinals looked like one of the NFL’s best teams in 2021 after starting with a 10-2 record but lost four of their last five regular-season games before getting beat 34-11 by the Rams in the wild-card round.