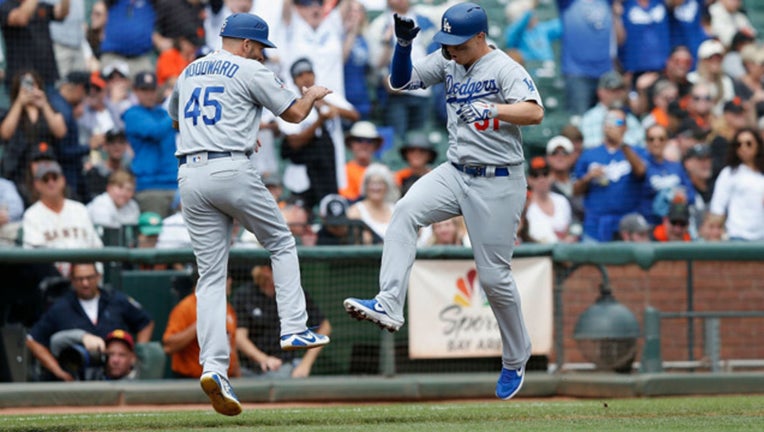 SAN FRANCISCO (AP) - The Los Angeles Dodgers clinched baseball's final playoff berth and gave themselves a chance to still win the NL West, getting a go-ahead triple from Manny Machado in the eighth inning Saturday and beating the San Francisco Giants 10-6.

The defending NL champions locked up their sixth straight trip to the postseason, assuring at least a spot in the wild-card game. The Dodgers joined Colorado, Atlanta, the Chicago Cubs and Milwaukee in the NL playoff field.

Los Angeles began the day one game behind Colorado for the division lead, and the Rockies hosted Washington later in the day. The regular season is scheduled to end Sunday - if Los Angeles and Colorado finish even, there will be a one-game tiebreaker for the West title Monday at Dodger Stadium.

After the final out, the Dodgers exited their dugout and high-fived in a tame celebration. Manager Dave Roberts waved to hundreds of fans in the outfield bleachers.

The Dodgers' win eliminated St. Louis from playoff contention. The Cardinals beat the Cubs earlier in the day to preserve their postseason chances for another few hours.

Machado, the star infielder acquired from Baltimore during the All-Star break, hit a two-out triple off Mark Melancon (1-4) for a 6-5 lead. Max Muncy added a two-run double during a four-run ninth, much to the delight of all the Dodger Blue in the rival's ballpark.

Alex Wood (9-7) pitched the seventh for the win and Kenley Jansen closed it out.

Clayton Kershaw allowed eight hits and five runs over five innings and had a two-run single in the fourth for his first career RBIs in 24 games at AT&T Park.

Kershaw had two stints on the disabled list this year, made just 26 starts and failed to beat the Giants in four 2018 outings. He missed double-digit wins for the first time since going 8-8 in 2009, also the last season he didn't beat San Francisco at least once.

The Dodgers dropped into second place in the West behind the Rockies following a 7-2 loss at Arizona on Wednesday. That left Los Angeles the final weekend against its rival to capture a third playoff trip in as many years under Roberts.

If Los Angeles couldn't clinch at Dodger Stadium, doing so on the Giants' field wasn't a bad second choice.

"It is sort of fitting," Roberts said.

Giants rookie Dereck Rodriguez, who lasted just three innings while facing the Dodgers for the first time, saw his winless stretch reach seven starts since defeating the Pirates on Aug. 12. His 2.81 ERA with a minimum of 100 innings pitched ranks lowest in San Francisco history for rookies. The Giants lost his last seven outings and nine of 11.

Giants: Bruce Bochy was doubtful rookie OF Austin Slater would play the final two games because of a strained right elbow. An MRI exam was completed and the medical staff was reviewing the results.

Umpire: Friday plate umpire Brian Knight broke his left foot on a foul tip in the top of the sixth inning - he kept working - then was replaced Saturday by Ed Hickox, who arrived in the Bay Area about 3 a.m. after working a 15-inning Diamondbacks-Padres game at San Diego.