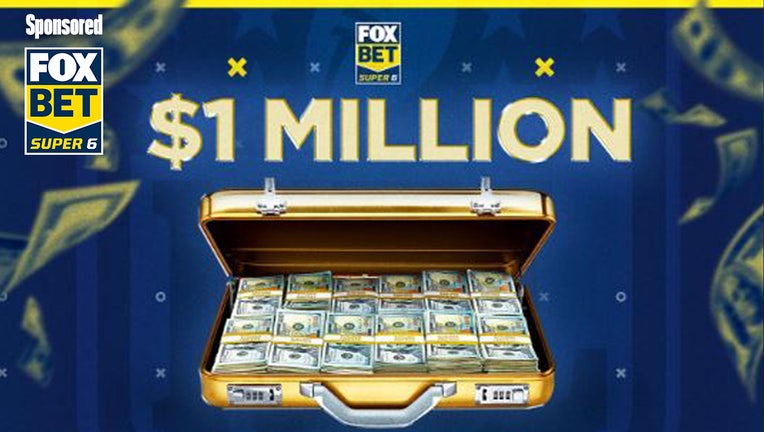 Terry Bradshaw really wants you to win this $1,000,000 jackpot by playing the FOX Bet Super 6 NFL Sunday Challenge. And honestly, I do, too.

It's ONE MILLION dollars, for goodness’ sake. You know that sense of wonder you feel after you shell out two dollars to play the Mega Millions lottery? Well, playing the FOX Bet Super 6 NFL Sunday Challenge gives you that same rush. But this is even better because it's free.

So keep your two dollars.

Last week, a single player would've won the million-dollar cash prize if the Raiders had defeated the Titans by at least 8 points. Other than missing that game and outcome, the would-be winner had perfect picks.

Now, I know harping on what could have been can be a buzzkill — especially when we're talking about a million bucks. But acknowledging how close he came highlights that you can actually win this money.

But only if you play.

All you have to do is download the FOX Super 6 app right now, open NFL Sunday Challenge and pick the winners and the margins of victory for this weekend's six marquee matchups. Submit your selections before Sunday's games kick off, and voilà! You could be a million dollars richer before it's time to go to work next Monday.

That is, if you're even going to work after you become a millionaire.

But before you do all that, let us help you. Check out our predictions for this week's slate of games.

Is the Dak era in Dallas over? Is Cooper "Back-up Quarterback" Rush the captain now? No one does a quarterback controversy better than the Cowboys. So however it all unfolds in Dallas, we're claiming a front row seat.

Quarterback drama aside, the 2-1 Cowboys are riding the momentum of a 23-16 Monday Night Football victory over the Giants into this home game against the Commanders. Carson Wentz & Co come into this matchup 1-2. Their lone win was over the Jaguars in Week 1. Unfortunately for the Commanders, this won't be the week they get their second win.

The Cowboys overcame 70 yards worth of penalties Monday night to seal the W at New York. Running backs Ezekiel Elliott and Tony Pollard averaged 6.3 yards per carry. Cooper Rush — who is now 3-0 against the spread (ATS) and 3-0 straight up (SU) as a starter in the NFL — had 21 completions and 215 yards. So with Dak out again in Week 4 with his thumb injury, we're backing the backup and the Boys.

FOX Bet oddsmakers have Dallas favored to win by 3 points. That's a look we like. Since 2018, when the Cowboys are home favorites, they've gone 16-10 straight up. In that same time frame against NFC East opponents specifically, that record is 18-6.

We do want to give kudos to Commanders' QB Carson Wentz who has started the season with seven touchdowns on 861 yards passing.

But Sunday, it's all about Big D.

Prediction:
Cowboys by 4 to 5

The streets are talking about the Bills and quarterback Josh Allen.

Buffalo steamrolled the Super Bowl champion Rams in Week 1, 31-10 and easily defeated the Titans in Week 2, 41-7. And by all accounts, they should've beaten the Dolphins in Week 3. Either way, the Bills have been dominant early in the season, so they are favored to win it all at FOX Bet.

And then there's Allen. His numbers are incredible. His 1,014 passing yards rank first in the League. His nine TDs rank second. But is Buffalo's offense too quarterback-centric for sustained success? Something to keep an eye on as the season moves forward.

The Ravens have had their fair share of chatter surrounding their organization, too. Will Lamar Jackson get the payday he deserves? Is Baltimore a lock to win the AFC North as the odds suggest?

Amid all these unanswered questions, here's what we know. Jackson's 10 TD passes rank first in the NFL. The Ravens' offense's 33 points per game are currently the best in the league. The Bills' defense allows the league's fewest yards per game at 214.

So who gets the edge in Sunday's matchup?

The Ravens enter this game as 3.5-point underdogs. This marks only the third time Baltimore has been a home dog since Lamar became the starter. And in those other two instances, Jackson has thrived, going 2-0 ATS and 2-0 SU.

Also, under coach John Harbaugh, the Ravens are 19-10 SU against AFC East opponents. And in the nine games these teams have played against each other since 1999, the Bills have only been on the winning side three times. The choice is clear to us.

One thing Detroit will do if they don't do anything else is cover the spread. Despite a 1-2 overall record, the Lions are 3-0 ATS.

We love that for them.

But as we already mentioned, winning on the field is a losing story for the Lions — until now.

The Lions host the 1-2 Seahawks in Week 4, and while both teams have gotten off to poor starts, Detroit has the upper hand.

Well, the Seahawks' overall defense ranks in the bottom-fourth of the NFL. They average 55 plays per game, which ranks 30th. And the defense averages seven penalties per game, ranking a dismal 25th. When Seahawks' QB Geno Smith has been a road underdog as a starter — which is the case this weekend — he has a 3-12 overall record.

The Lions just look better on paper. Detroit's 5.9 yards per rushing attempt leads the NFL. The team's scoring offense averages 31.7 points per game, which ranks second. And honestly, Detroit is due to make all those points on the turf translate to another W in the win column.

This game features two teams with two wins between them both over three weeks of NFL play.

Especially considering the Titans finished last season with a 12-5 regular season record and a first-round bye. Will this be a bounce-back game for Tennessee?

The Titans swept their season series against the Colts in 2021, and they've won three-straight matchups against Indy. And Tennessee is 8-1 in its last nine divisional games. It also looks like Derrick Henry has finally shaken off the dust from the team's beating by the Bills in Week 2. In that game, he was held to just 25 yards on 13 carries. In the squad's Week 3 win over the Raiders, the Pro Bowl back had 85 yards on 20 carries. Look for him to have a big game.

When we look at the Colts, we know that Indy QB Matt Ryan is always good for a fourth-quarter rally. In Week 3, he engineered his 35th game-winning comeback to defeat the Chiefs 20-17. But Matty Ice won't get that lucky two weeks in a row. On a side note, Colts running back Jonathan Taylor — one of the team's most reliable offensive weapons — has only scored one touchdown this year. As long as the Titans limit Taylor, they should run away with this one.

Prediction:
Titans by 8 to 10 points

The Bears are 3.5-point underdogs at the G-Men this Sunday.

No, sir, we don't agree with this line.

The Giants are down bad with injuries. The most unfortunate one came in the team's Monday Night Football loss to the Cowboys when receiver Sterling Shepard went down with an ACL injury. And let's not even get started on Daniel Jones and that weak Giants offensive line. As a matter of fact, let's.

Jones has been sacked 13 times this season over three games. You do the math. That's not good.

The Bears, though, have been a nice surprise this year. Even though they rank 32nd in total offense, averaging just 265.0 total yards per game, they are 2-1 heading into October. We're not sure what's gotten into the Bears, but we'll allow it.

One thing we do know is that running back Khalil Herbert has pumped up the volume. Herbert had a career-high 157 rushing yards in Week 3 against the Texans after starter David Montgomery went out with injury. And when it comes to total rushing offense, Chicago now ranks second this season, averaging 186.7 rushing yards per game.

Pounding the rock has done Da Bears good so far this season. And they'll keep doing just that this weekend.

Here's another important note for you: Chicago is 4-0 in the last four games against the NFC East. Three of those wins were against none other than these very Giants.

Well, well, well. Baker Mayfield finally got his first win with his new team in Carolina in Week 3 over the Saints — a win that snapped the Panthers' nine-game losing streak. Good for him, but we're still riding with AZ in this one.

And hear us out when we say this. It's not that we're so in love with Arizona. The Cards, after all, rank 31st in scoring defense. And the Panthers have defeated them in six-straight matchups dating back to 2015. So no, this is not an Arizona stan account.

It's more of a "we are still giving a major side eye to Carolina" account.

On the other side of the ball is an Arizona team that is 12-7 SU as a road underdog under Kliff Kingsbury. In Sunday's game, the Cardinals are 1.5-point underdogs. Right where young Kliff likes to be.

Also, Cards' QB Kyler Murray is due for a breakout game. After an embattled offseason, it's time for him to show up and show out. What better team to do that against than Carolina?

Now, it's your turn. After you download the app and submit your selections, share your picks with us by tagging @FOXSuper6 and @EricaReneeD and using #EricaSuper6 across all social media.

Let's get this money!