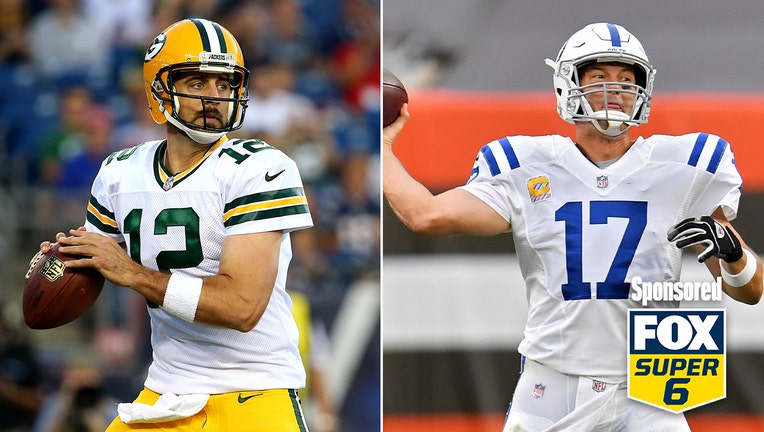 LEFT: Aaron Rodgers #12 of the Green Bay Packers drops back to pass in the first quarter against the New England Patriots during a preseason game at Gillette Stadium on August 13, 2015 in Foxboro, Massachusetts. (Photo by Maddie Meyer/Getty Images) R

The fun part comes at 4:25 on Sunday afternoon when the Green Bay Packers and Indianapolis Colts get together for “America’s Game of the Week” on FOX.

The tough part for many who are trying to win FOX’s Super 6 jackpot of $1 million this week is coming up with a reason to pick a side in the marquee game of the afternoon.

On a schedule that has a lot of interesting dynamics, there’s plenty of reasons to choose either the Packers or the Colts. However FOXBet.com and FOXSports.com wanted to give you good arguments to make your pick – on both sides.

So how are you leaning? Well, here’s some points to chew on as you pour onto the FOX Super 6 app and play for free.

TAKE THE PACKERS FOR THESE FOUR REASONS

1) Aaron Rodgers is the best player on the field
While others are getting more MVP discussion- Russell Wilson, Patrick Mahomes, Kyler Murray to name three – Rodgers is having a career best season as he nears 37 years of age. Almost 2,600 yards passing, a near 68 percent completion percentage and 26 touchdown passes after the Packers drafted his perceived replacement with Jordan Love.

Plus, Rodgers now can make his MVP case with three straight national broadcasts – this week against the Colts, home against Chicago next Sunday night and a late window game against the Eagles on Dec. 6. This is where the campaign begins in force.

2) Protecting the Rock
The Packers are among the best at not beating themselves. Through nine games, Green Bay has only yielded five turnovers- the second best mark in the league behind Tennessee’s four. In 2018 and 2019, Green Bay finished with the second fewest  amount of turnovers. In other words, the Packers don’t beat themselves- you have to go and beat them.

3) All they do is win
What team would immediately come to mind if I said they were 20-5 over the past two regular seasons? Well, the Chiefs would probably be at the top of the list. It’s also the same record that the Packers have. They don’t have a great defense, a ton of skill position players and they can throw a few ugly ones in there- like last weekend’s lackluster 24-21 win over one-win Jacksonville at Lambeau. Still, the resume don’t lie.

4) The Colts have one “Wow” win
Before winning at Tennessee last week, Indianapolis best tally on the ledger was a 19-11 win over a Bears team that have been revealed in recent weeks.  In two matchups against playoff teams in the Browns and Ravens, Indianapolis spent most of the second half chasing the game and never felt really competitive. The Packers are the best team that the Colts have faced all year.

TAKE THE COLTS FOR THESE FOUR REASONS

1) The Indianapolis defense is incredibly good
What America learned last Thursday night in the throttling of the Titans in Nashville was how incredibly relentless the Colts defense is. Indianapolis allows the fewest number of total yards at 290.4. They allow 19.7 points per game- fourth best in the league behind the Ravens, Rams and Steelers.  Darius Leonard  has turned into a must-see player at that side of the ball in the middle of a really good linebacker corps.

2) Old Man Rivers
One of the best things about Philip Rivers over the years is the fact that he lives for these marquee matchups against other prime quarterbacks. Rivers can throw big numbers up there with anybody in a key spot, even though there were a lot of times when Rivers was with the Chargers where he didn’t have the best talent. At his age, there may not be many of these left for him. He could thrive in this moment.

3) That Clunker the Packers Laid
Green Bay’s has two losses – one was to the rival Vikings. But that game against the Buccaneers- a team that pushed the Packers around on the offensive line and made life miserable for Rodgers all day long- stands out as a haunting memory because the Colts defense is not that far away from what Tampa Bay played on that Sunday in mid-October. Indianapolis has game film and a plan they can use to t […missing text? -BA]

4) Chip on their shoulder
When the best teams in the AFC are mentioned, Indianapolis barely gets a passing reference behind Pittsburgh, Kansas City, Baltimore, Tennessee and even Buffalo. Part of it is the fact that the Colts quarterback is an older veteran in the twilight of his career. The other part? You don’t really get to see the Colts all that much. If they want to be more than a passing mention, they need a game like this.