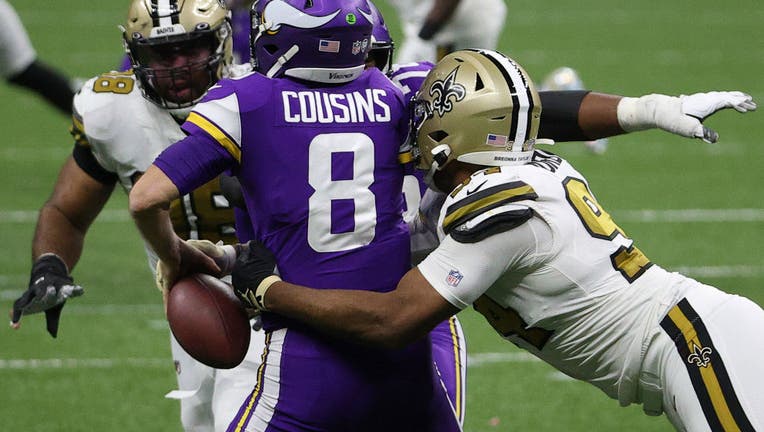 NEW ORLEANS, LOUISIANA - DECEMBER 25: Cameron Jordan #94 of the New Orleans Saints strips the ball from Kirk Cousins #8 of the Minnesota Vikings during the fourth quarter at Mercedes-Benz Superdome on December 25, 2020 in New Orleans, Louisiana. (Pho

NEW ORLEANS (AP) - Alvin Kamara tied an NFL record by running for six touchdowns in a game and finished with a career-high 155 yards rushing to help New Orleans beat the Minnesota Vikings 52-33 on Friday and clinch a fourth straight NFC South title.

Wearing different colored shoes — one red and one green on Christmas Day — Kamara sprinted for a 40-yard touchdown on the game’s opening drive. He added scoring runs of 1, 5, 6, 7, and 3 yards against a Minnesota defensive front hit hard by injuries.

Kamara equaled a record set by Hall of Fame fullback Ernie Nevers in 1929 for the Chicago Cardinals.

"The offensive line gets the game ball for sure, kudos to them," Kamara said. "Sean (Payton, the Saints coach) dialed it up, I did the small part.

"Today was a great day, we got out first goal, division title. Gonna take it from there."

Minnesota (6-9) was eliminated from playoff contention while allowing the most points by any Vikings team since 1963.

The Saints (11-4) never punted, and set a record of yards gained in a game by a Vikings opponent with 583. They might have won by a greater margin if not for a pair of interceptions of Drew Brees, one of them on a pass that deflected off receiver Emmanuel Sanders’ hands.

Brees completed 19 of 26 throws for 311 yards in his second game back from rib and lung injuries that had sidelined him for four games.

New Orleans native Irv Smith Jr. caught a pair of touchdown passes in the third quarter for the Vikings, the second pulling Minnesota to 31-27. But the Saints responded with two short touchdown runs by Kamara and one by reserve QB Taysom Hill in the fourth quarter to put the game out of reach.

Kirk Cousins passed for 283 yards and three touchdowns for the Vikings, who never led and trailed for good after Kamara’s second TD in the first quarter.

In a game that saw both defenses struggle, Saints receiver Marquez Callaway made a play that any defensive back would appreciate when he prevented Eric Wilson from intercepting a pass Brees thrown right at the linebacker. Brees took advantage of the second chance, hitting Callaway for 11 yards on the next play and then finding Cook for a 19-yard gain to the Vikings 6. That set up Kamara’s third TD run of the half to put New Orleans up 24-14.

Vikings: Minnesota did not report any injuries.

Saints: LB Kwan Alexander injured his right ankle late in the third quarter. He was initially helped off the field but later took a cart from the sideline to the locker room.

Vikings: Visit Detroit on Jan. 3, the final Sunday of the regular season.