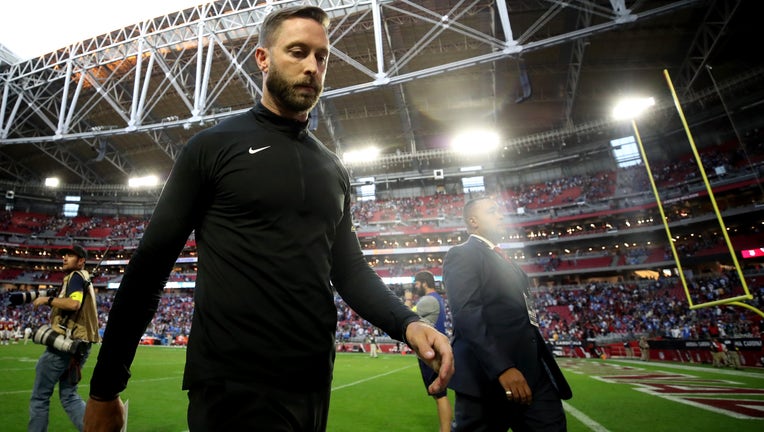 GLENDALE, ARIZONA - NOVEMBER 27: Head coach Kliff Kingsbury of the Arizona Cardinals walks off the field after a game against the Los Angeles Chargers at State Farm Stadium on November 27, 2022 in Glendale, Arizona. (Photo by Christian Petersen/Getty (Getty Images)

GLENDALE, Ariz. (AP) — Leading by a touchdown late in the fourth quarter, the Arizona Cardinals needed an extended possession to run time off the clock.

It lasted 31 seconds, plenty of time for the Los Angeles Chargers to not just tie the game, but win it with a 2-point conversion.

Now the clock may be ticking on coach Kliff Kingsbury’s time in the desert.

Giving Los Angeles ample time after their blink-and-miss-it possession, the Cardinals lost 25-24 on Sunday when the Chargers scored on a touchdown pass and 2-point conversion with 15 seconds left.

"We had our chances. Both teams played well enough to win," Kingsbury said. "They made the plays at the end and we didn’t."

The Cardinals (4-8) jumped out to an early 10-point lead, but the Chargers scored twice to take the lead.

The second touchdown, a 33-yard pass from Herbert to a wide-open DeAndre Carter, came after Kingsbury opted to go for it on fourth-and-inches from Arizona’s 35-yard line. Instead of handing the ball to James Conner, Arizona tried a pass play that was intercepted by Derwin James Jr. near midfield.

The Cardinals then went up 24-17 on Kyler Murray’s 6-yard touchdown pass to Conner midway through the fourth quarter. Arizona’s defense held, giving the ball back to the offense three times after the score.

The third straight punt gave Los Angeles the ball at the Cardinals 38 with 1:49 left. Justin Hebert marched the Chargers (6-5) quickly down the field and hit Austin Ekeler on a 1-yard touchdown pass.

Coach Brandon Staley called for the Chargers to go for 2. They converted when tight end Gerald Everett broke open underneath and Herbert hit him for the winning points.

"He’s got the confidence in us," Chargers receiver Keenan Allen said. "That what it means and that is what it shows. We just go out there and get it done."

The Cardinals’ confidence in Kingsbury may be waning.

The former Texas Tech coach’s seat began to warm last season even as the Cardinals made the playoffs for the first time in six years. Arizona opened 8-1, but lost five of eight to close out the regular season and were run over 34-11 by the Los Angeles Rams in the playoffs.

RELATED: Cardinals in extended funk as attention turns to Kingsbury

The Cardinals have been hit hard in 2022 by injuries, DeAndre Hopkins’ six-game suspension to start the year and inconsistencies week to week, sometimes play to play.

Arizona was overmatched in a 38-10 loss to San Francisco in Mexico City on Monday night, with several players appearing disinterested in trying to tackle George Kittle on a late touchdown.

Arizona had some success running the ball against the Chargers — Conner finished with 120 yards — and the defense limited Herbert’s opportunities to throw deep while sacking him four times.

When it got to crunch time, the Cardinals stumbled to their fourth defeat in five games.

"We made some plays early, it got us going," Kingsbury said. "Just at the end of the game, we didn’t make the plays we needed to offensively finish with a win."

The Cardinals needed to run more time off the clock, something Kingsbury may be running out of.