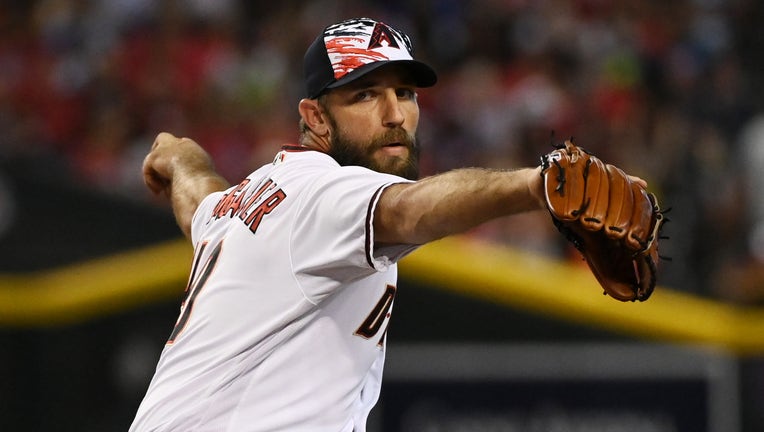 Madison Bumgarner #40 of the Arizona Diamondbacks pitches in the first inning against the San Francisco Giants at Chase Field on July 4, 2022. (Photo by Norm Hall/Getty Images)

"I was excited to pitch on the Fourth of July, it’s a special day for me," Bumgarner said.

As for motivation against his old team, "There’s not that many of them in the lineup." Only Austin Slater and Evan Longoria were ex-teammates who started Monday.

Buddy Kennedy drove in a pair of runs and Cooper Hummel scored twice for Arizona. The Giants have lost 11 of 14.

Last season, the Giants went 17-2 against Arizona in winning the NL West title. But in the first of their 19 meetings this year, Bumgarner (4-8) and the D-backs prevailed.

"He was making pitches, I thought he just got nicked up for a couple of well placed hits," Diamondbacks manager Torey Lovullo said.

Bumgarner gave up a two-run single to LaMonte Wade Jr. in the first, then settled in. He was pulled after 100 pitches, and is now 2-1 lifetime against the Giants.

Kennedy hit a tying, two-run single in the first. A series of Giants misplays in the second helped Arizona score two more — Rodón was late covering first on an infield single, San Francisco then botched a bunt and catcher Curt Casali made a throwing error on a steal.

"We have a lot of work to do," Giants manager Gabe Kapler said. "This is one game, but we certainly have to recognize that we aren’t playing our best baseball and we have to come back tomorrow and be ready to go."

David Villar made his major league debut for the Giants, batting seventh and playing second base. On the first pitch he saw, he lined a double off the fence in right-center field. He later had an RBI single.

Villar, the Giants’ 11th-round draft pick in 2018 from South Florida, was batting .284 with 21 homers and 62 RBIs in 66 games at Triple-A Sacramento. He led the Pacific Coast League in home runs.

Giants: SS Brandon Crawford (left knee inflammation) is eligible to come off the injured list on Tuesday. Kapler said "all systems are go" for Crawford’s return. "I think he makes everybody around him better," Kapler said. ... Casali left the game in the seventh with what Kapler said after the game appeared to be an oblique injury, and will be getting an MRI. Backup catcher Austin Wynns batted for Casali with a full count and singled.

Diamondbacks: RHP Ian Kennedy (right calf) was placed on the 15-day injured list just before the game. Arizona recalled RHP Keynan Middleton from Triple-A Reno to replace him. Kennedy, 37, has a 3.58 ERA this season in a setup role. He left Sunday’s game at Colorado after retiring one batter in the eighth inning.

LHP Alex Wood (5-7, 5.03) will start for the Giants on Tuesday. Lovullo said after the game that LHP Tyler Gilbert will be called up to start for Arizona.