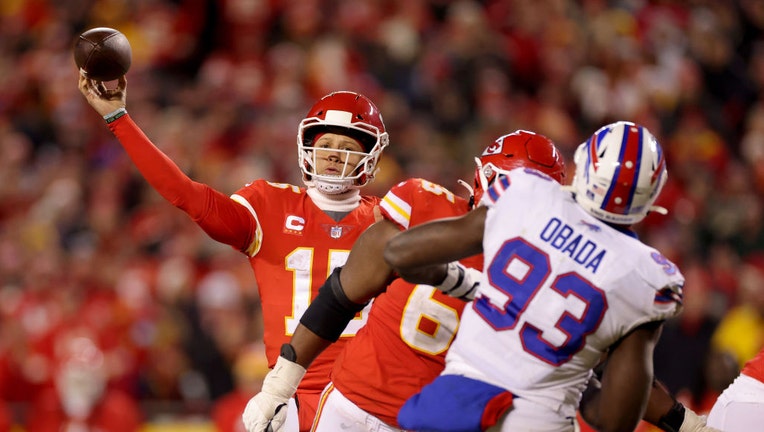 Patrick Mahomes #15 of the Kansas City Chiefs throws the game winning touchdown to Travis Kelce #87 against the Buffalo Bills during overtime of the AFC Divisional Playoff game. (Photo by David Eulitt/Getty Images)

WASHINGTON - After Sunday night’s overtime thriller between the Kansas City Chiefs and the Buffalo Bills in the AFC Divisional Playoffs, the debate about the league changing its OT rules was resurrected.

The Bills and Chiefs scored a combined 25 points in the final two minutes of the fourth quarter, with multiple lead changes that eventually ended in a tie.

The Chiefs won the coin toss in overtime and quarterback Patrick Mahomes capped off the improbable comeback by throwing a game-winning touchdown pass to Travis Kelce, sending the Chiefs to the AFC Championship game.

Some have argued that the NFL’s overtime rule could be improved if both teams have a chance to possess the ball instead of a coin flip awarding the ball to one team with a chance to win.

However, supporters of the league’s OT rule believe the Bills had a chance to earn a possession in the extra period if they didn’t allow the Chiefs to score a touchdown. If Buffalo kept Kansas City out of the end zone and held them to a field goal, the Bills would have earned a possession and an opportunity to win the game with a touchdown.

Here is a breakdown of the college football and NFL postseason overtime rules.

Under the college football overtime format, overtime periods, through the first two if necessary, there is a two-possession series with each team getting a possession on offense and one on defense.

The team that scores the most points during regulation and overtime wins the game. If the game is still tied after an overtime period, another overtime period is played.

Additionally, each team is given one timeout for every overtime period. Timeouts that aren’t used during regulation can’t be used in overtime. Both teams get the ball until one of them scores or doesn’t get a first down.

In the NFL, there is a 10-minute period and both teams get a possession at least one time in overtime unless the team that wins the coin toss scores a touchdown on its first possession.

According to the NFL, if the score is still tied at the end of overtime or if the second team’s initial possession has not ended, the teams play another overtime period. The game continues regardless of how many overtimes are needed to determine a winner.

The team’s captain who lost the first overtime coin toss will either choose to possess the ball or select which end of the football his team will defend, unless the team that won the coin toss deferred that choice, and each team receives three timeouts in overtime.

The NFL implemented a sudden death overtime format to determine a winner in a tie game for the 2010 playoffs. But in 2012, the league expanded the overtime rule for all NFL games.

According to FOX Sports, since the new overtime format in 2012, 10 out of 11 NFL teams who won the coin toss in overtime and gained the first possession won their playoff game.