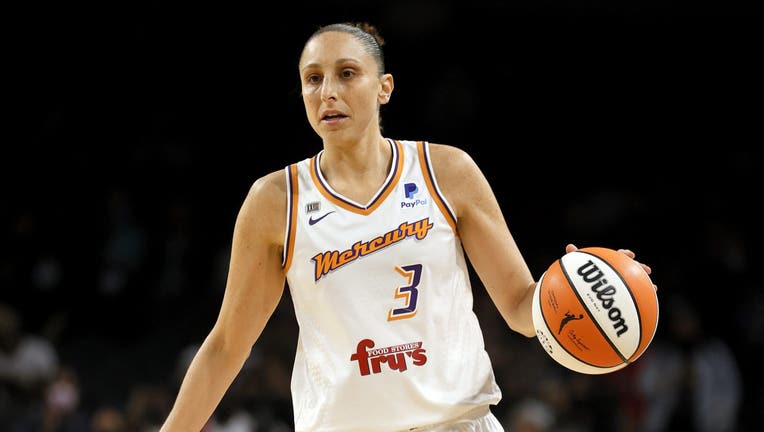 LAS VEGAS, NEVADA - SEPTEMBER 30: Diana Taurasi #3 of the Phoenix Mercury brings the ball up the court against the Las Vegas Aces during Game Two of the 2021 WNBA Playoffs semifinals at Michelob ULTRA Arena on September 30, 2021 in Las Vegas, Nevada.

Taurasi scored a playoff career-high 37 points and the Phoenix Mercury overwhelmed the Las Vegas Aces 117-91 on Thursday night to even the best-of-five WNBA semifinal series at a game apiece.

"We brought a different mindset to the game, an aggression," Taurasi said. "That’s what these games come down to. In Game 1, they were the aggressors. They played more physical. Today we did that and sustained that for long periods."

Taurasi, the 39-year-old guard who has been dealing with a left ankle injury, was 10 of 13 from the field and made a career-high eight 3-pointers in 11 attempts.

She missed the final four games of the regular season and the single-elimination first-round matchup against the New York Liberty. Mercury coach Sandy Brondello said Taurasi did not practice in the weeks leading up to the playoffs and didn’t take part in any basketball activities until Sunday’s playoff game against the Seattle Storm.

"I think as you get older, obviously you want to practice and get into a rhythm, but that’s when you’ve really got to lock in and lean on your experiences you’ve had in this league for a long time," Taurasi said.

Phoenix set a WNBA playoff record with 68 first-half points on 76.5% shooting. Brittney Griner scored 25 points, 16 of them in the first quarter, to go with seven rebounds and five assists.

Kelsey Plum, honored as the league’s Sixth Player of the Year on Thursday, led the Aces with 25 points. Riquna Williams had 17, and Liz Cambage added 13.

Much like in Game 1, Phoenix got off to a strong offensive start. This time the Mercury were able to withstand it.

The Mercury shot 84.2% in the first quarter en route to a 37-20 lead after the opening 10 minutes. Phoenix started the game on a 13-2 run with Taurasi making her first two shots.

Griner was the force at the start. She started the game 7 of 8 while contributing with five rebounds and three assists. Each of those assists came off double teams.

"I think it was more about we executed. I thought we exploited some of their matchups," Brondello said. "We took better shots in this game than we did in the first game."

Laimbeer was not pleased with the way the game was called regarding his team.

"They treat us like we’re champions, and we get a champion’s whistle," Laimbeer said. "We’re not. We’re trying to win our first one. Why treat us like that? Why put them in the game? Were we going to win this game? Probably not. But at least give us some respect."

Laimbeer provided a vague instance where a foul was called "before it even happened" to give Phoenix free throws.

The Mercury went 23 of 24 from the free-throw line, with Taurasi making all nine attempts. The Aces were 15 of 22.

Game 3 is at Phoenix on Sunday.