Coaches from the Atlantic Coast Conference want the 2021 NCAA Tournament to be the biggest in college basketball history.

Indianapolis was already prepared to host the Final Four this spring.

Now, the Amateur Sports Capital of the World will be hosting all 67 games in this year’s NCAA Men’s Basketball Tournament.

The NCAA has reached an agreement with city officials to host the entire tournament at venues around Indianapolis.

"This is a historic moment for NCAA members and the state of Indiana," NCAA President Mark Emmert said in a news release. "We have worked tirelessly to reimagine a tournament structure that maintains our unique championship opportunity for college athletes. The reality of today’s announcement was possible thanks to the tremendous leadership of our membership, local authorities and staff."

RELATED: NCAA in talks with Indianapolis to host all of March Madness

The tournament, which traditionally takes place at several cities across the country, is being reimagined amid the COVID-19 pandemic. Limiting it to a single city will create a "bubble," similar to the environment the NBA created for the 2020 playoffs.

The NCAA collaborated with the Marion County Health Department to develop medical protocols for the tournament. Players, coaches, administrators and officials will have access to OCOVID-19 testing within the bubble.

Mariott properties, a major sponsor of the tournament, will house most of the teams. The properties include skywalks that connect the convention center.

Each team will be dedicated an entire hotel floor with meeting and dining rooms arranged for physical distancing.

"This is going to be complicated and difficult; there’s no question about that. We appreciate the collaboration among the Men’s Basketball Committee and staff, our hosts and local organizers, the staffs at each practice and competition venue, and our broadcast and corporate partners," NCAA Senior Vice President of Basketball Dan Gavitt. "We will all pull together and stage a terrific national championship." 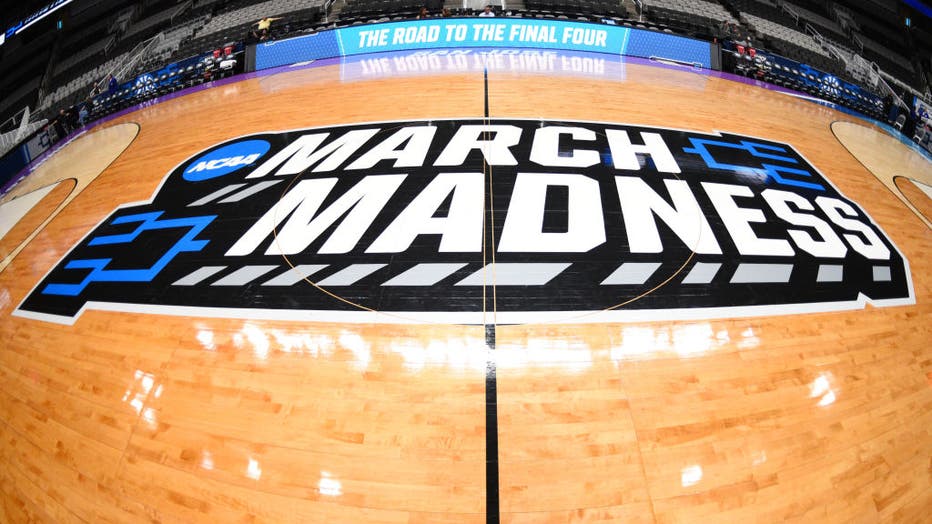 The march madness logo on the court before the game between the Kansas State Wildcats and the UC Irvine Anteaters in their NCAA Division I Men's Basketball Championship first round game on March 22, 2019, at SAP Center at San Jose in San Jose, CA. (P

Ball State, Butler, the Horizon League, Indiana, Indiana University-Purdue University Indianapolis and Purdue will serve as hosts for the event by lending their facilities and staff to assist with tournament operations.

Multiple courts will be set up inside the Indiana Convention Center, which will serve as a practice facility.

Lucus Oil Stadium, which was already slated to host the Final Four will have two courts set up inside. Only one game will be played there at a time.