Tropical Storm Ian is strengthening in the Caribbean Sea, and much of the Florida Peninsula is already included in the cone of uncertainty for what could become a major hurricane in the days ahead.

Florida Governor Ron DeSantis has declared a state of emergency for all 67 counties ahead of arrival of impacts from the tropical trouble.

Here's everything the FOX Forecast Center knows about this significant threat to the southeastern U.S. next week.

Where is Tropical Storm Ian?

All eyes are on Tropical Storm Ian that could impact the state of Florida next week. FOX 13 Meteorologist Tony Sadiku says Ian is battling a lot of wind shear and appears to be lopsided, which makes it tough to identify a center of circulation. However, Sadkiu says Ian is going to rapidly intensify as it passes just south of Jamaica and could become a hurricane by Sunday. Florida is within Tropical Storm Ian’s cone of uncertainty, and though it is too early to talk specifics, Sadiku says it is important to get prepared now.

As of Saturday evening, Tropical Storm Ian was in the Caribbean Sea and centered less than 300 miles south-southeast of Kingston, Jamaica, and more than 500 miles southeast of Grand Cayman in the Cayman Islands.

Ian had maximum sustained winds of about 45 mph and was moving west at 16 mph.

The Hurricane Hunters have several missions scheduled for Tropical Storm Ian to collect data that will be used to help meteorologists refine their forecasts. 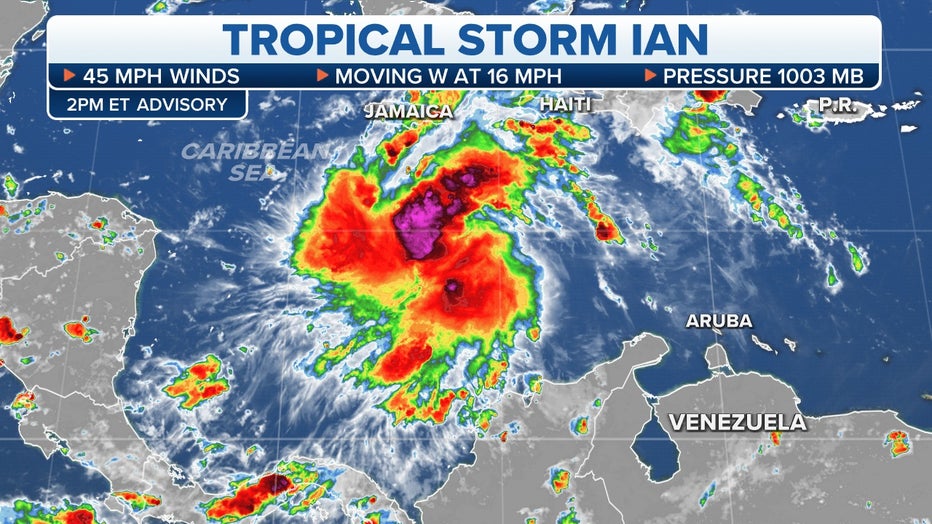 Where are watches and warnings in effect?

A Hurricane Warning means that winds of at least 74 mph are possible within the watch area. A watch is typically issued 48 hours before the anticipated first occurrence of tropical-storm-force winds (39-plus mph), conditions that make outside preparations difficult or dangerous.

KNOW YOUR ZONE: FLORIDA EVACUATION MAP SHOWS WHO WILL HAVE TO LEAVE BEFORE A HURRICANE STRIKES

A Tropical Storm Watch means that tropical-storm-force winds are possible within the watch area, generally within 48 hours. 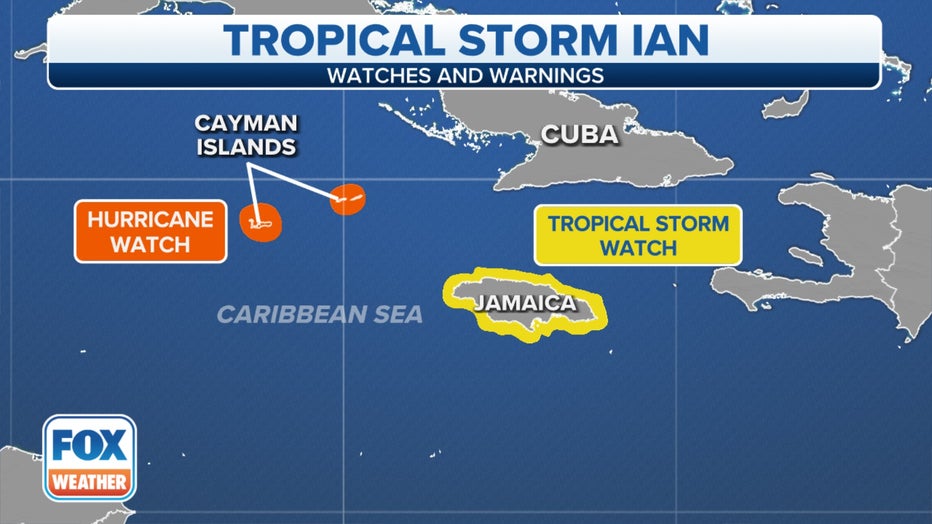 What is the forecast for Tropical Storm Ian?

Significant intensification of Tropical Storm Ian is expected over the next few days.

The latest forecast from the National Hurricane Center shows Ian becoming a hurricane in the northwestern Caribbean Sea late Sunday or Sunday night, and it could be at or near major-hurricane strength (Category 3 or stronger) late Monday when it approaches western Cuba.

By the start of the workweek, the future hurricane is expected to be located somewhere between the eastern Gulf of Mexico and the general vicinity of the Florida Peninsula, possibly with winds greater than 115 mph.

This would make Ian a Category 3 or stronger hurricane on the Saffir-Simpson Hurricane Wind Scale.

HOW ARE HURRICANES RATED? THE SAFFIR-SIMPSON HURRICANE WIND SCALE EXPLAINED 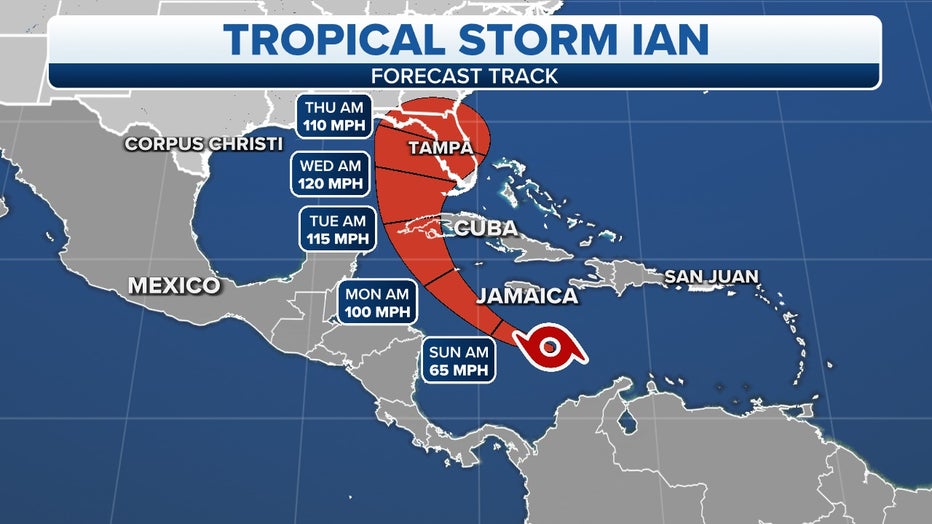 "Now what you want to focus on is how big the cone really is. The skinnier the cone, the more confidence in the forecast. The larger the cone, the more questions there are as to where this storm is going to go," FOX Weather meteorologist Britta Merwin explained. "Obviously, on days 4 and 5 as it gets closer to Cuba and Florida, you see more of a spread, and that's something to really take note of. There are a lot of changes that are likely to happen in the later half of this forecast, and this entire area really needs to look out for the potential of where we could be seeing this system as we get into early next week."

WHAT IS THE ‘CONE OF UNCERTAINTY' IN HURRICANE FORECASTS?

The tropical storm is still battling wind shear – winds that change direction and speed at various heights – which is keeping thunderstorms associated with the system from rapidly organizing.

According to the FOX Forecast Center, Tropical Storm Ian is expected to move into an area of the Caribbean Sea containing much lower wind shear and an abundant supply of deep, warm waters over the weekend.

WHAT IS WIND SHEAR? 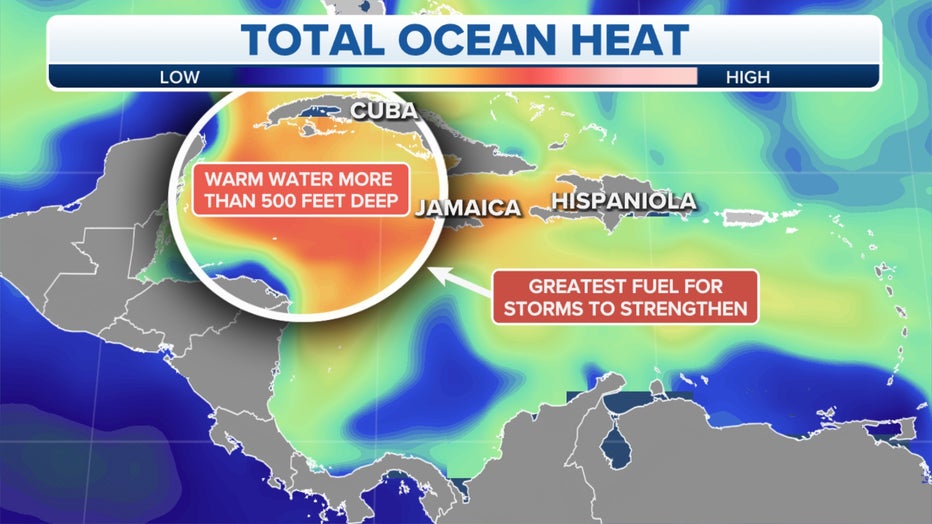 Ian will move into an area containing an abundant supply of deep, warm waters. (FOX Weather)

Water temperatures in this part of the Caribbean Sea are in the upper 80s, which is a couple of degrees above average, providing ample fuel for this system to intensify over the coming days.

However, one inhibiting factor could be land interaction with Cuba early next week before it reaches the Gulf of Mexico toward the middle of the week

What are the expected impacts of Tropical Storm Ian in the Caribbean?

The main concern from Tropical Storm Ian is heavy rainfall for Jamaica, the Cayman Islands, western and central Cuba, southern Haiti and the southern Dominican Republic beginning as soon as this weekend, according to the FOX Forecast Center.

The highest rainfall amounts are predicted in western and central Cuba, where 6 to 10 inches is expected with isolated amounts up to 14 inches. Jamaica and the Cayman Islands could see 4 to 8 inches of rain, with localized amounts up to 12 inches.

In southern Haiti and the southern Dominican Republic, between 2 and 4 inches of rain is forecast, though locally higher totals as high as 6 inches are possible.

Depending on the exact track and intensity of Tropical Depression Nine, there could also be tropical-storm-force (39-plus mph) or hurricane-force (74-plus mph) winds in these areas.

HERE ARE THE BUZZWORDS YOU'LL BE HEARING DURING HURRICANE SEASON

What threat will Tropical Storm Ian pose to Florida and the US Gulf Coast?

Tropical Storm Ian is predicted to be steered in the general direction of the eastern Gulf of Mexico and could be near the Florida Peninsula by the middle of next week.

An overwhelming majority of computer forecast models suggest the storm will likely be a major hurricane as it tracks toward the mainland U.S.

Each yellow line on the map depicts a different computer forecast model solution. 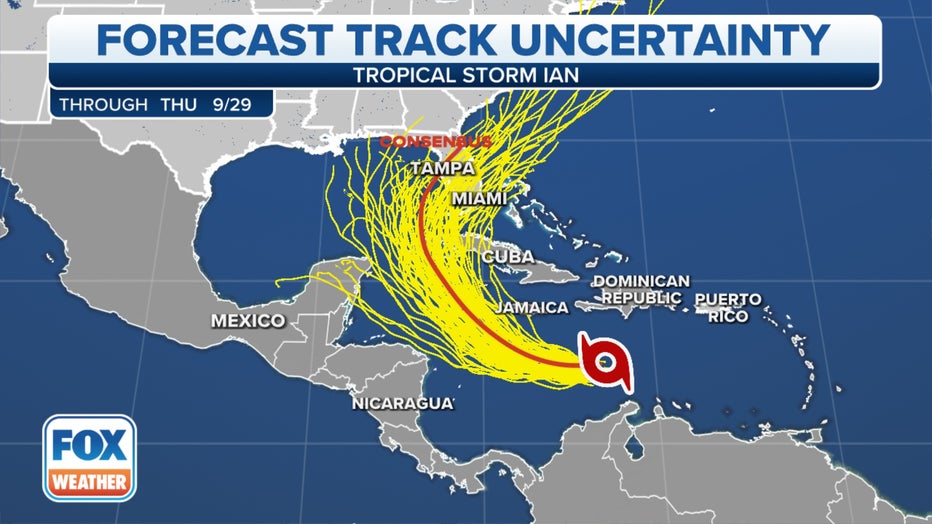 However, forecasts for newly developed tropical cyclones are challenging, so don't be surprised if the forecast for Tropical Storm Ian undergoes several changes – some of which could be significant – over the coming days.

The storm-track guidance from the various computer forecast models currently ranges from the eastern Gulf of Mexico to near or off Florida's Atlantic coast, so everyone in this general zone should begin their preparations now in the event of a potential major-hurricane strike next week.

For now, it appears at least 1 to 3 inches of rain will fall in the Florida Keys and South Florida through Tuesday morning, with localized amounts up to 5 inches possible.

HOW TO PREPARE FOR A HURRICANE 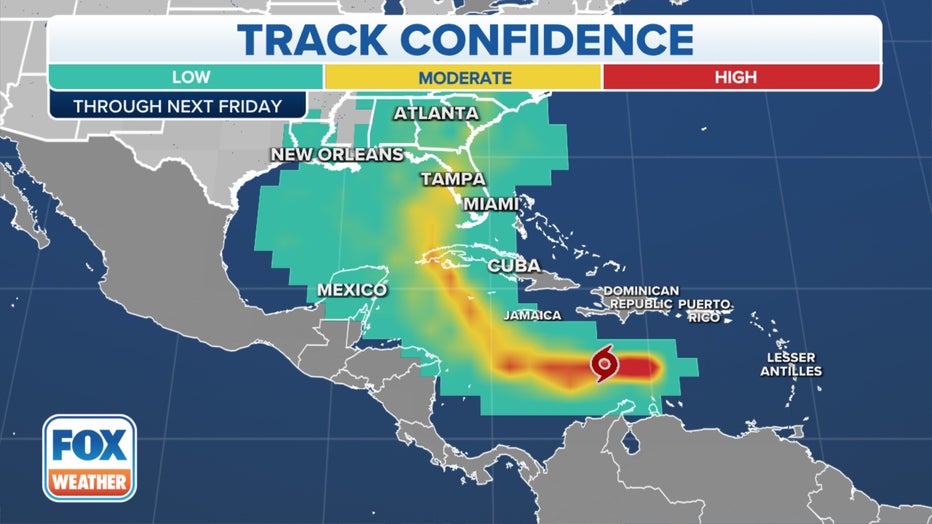 The various colors on the map indicate the confidence level in the track of Ian. (FOX Weather)

Beyond Ian's expected impact on Florida, the hurricane will then either move inland somewhere over the southeastern U.S., or it could track near or along portions of the Eastern Seaboard late next week and into the weekend.

So the bottom line is that it's still too early to know exactly where Tropical Storm Ian is heading, but know that there is a growing threat of a major hurricane impacting the southeastern U.S. around the middle of next week, followed by potential impacts spreading northward into other portions of the eastern U.S. by the end of the week.

Florida's emergency management agency is advising residents to prepare for the coming storm now. People can check their evacuation zone by typing in their address into an interactive map.

The FOX Forecast Center will be keeping a close eye on this system as it strengthens and tracks across the Caribbean in the days ahead.