Jack Rico spoke with FOX Television Stations about being one of the youngest graduates from the University of Nevada, Las Vegas.

HUNTINGTON BEACH, Calif. - While many teenagers are working to get their high school diplomas, Jack Rico has already earned his college degree.

The 15-year-old graduated, with honors, with a degree in history from the University of Nevada, Las Vegas, in December. Administrators believe he’s the youngest person to earn a diploma from the school.

Rico said the journey actually started when he was in elementary school after struggling to understand the lessons. 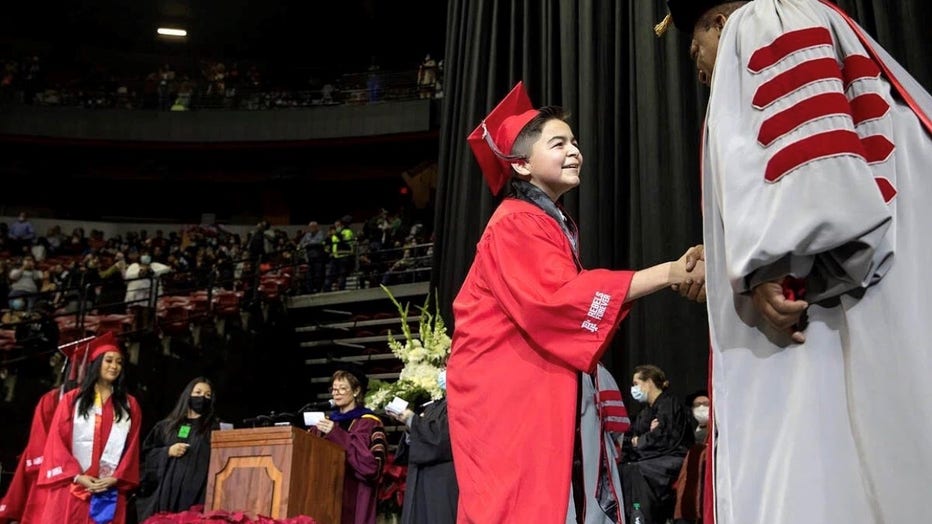 Jack Rico, 15, gets his diploma from the University of Nevada, Las Vegas. (Credit: Ru Andrade)

"I was struggling in third grade," he continued. "And I asked my mom there’s got to be another way to do this."

Rico’s mother, Ru Andrade, started homeschooling her son and he started to excel. Rico said his homeschooling was more interest-based and involved a concentration in history, allowing him to take field trips around the U.S. and Europe.

Then his mother ran out of lessons.

"After a while, my mom was like ‘I have nothing else to teach you’ so we were kind of looking into community college," he added.

At 11 years old, Rico skipped high school and started taking courses at Fullerton College in California. He then transferred to UNLV in the summer of 2020, taking in-person courses before transitioning to remote learning because of the pandemic.

"All my classmates and even the faculty were really nice to me," he said. "They treated me as one of their own, and I didn’t feel like a kid at all."

The teenager also explained that he doesn’t feel like he missed out on his childhood, saying one of his hobbies is playing video games.

"I got to see friends a lot," he described. "I have a lot of cousins. I got to hang out with them a lot."

Rico said he plans to get his master’s degree but is not sure in which concentration. He said he wants to take a break from academics before picking it up again next fall.

He said he doesn’t have a dream job but wants a career that will help him take care of his family.