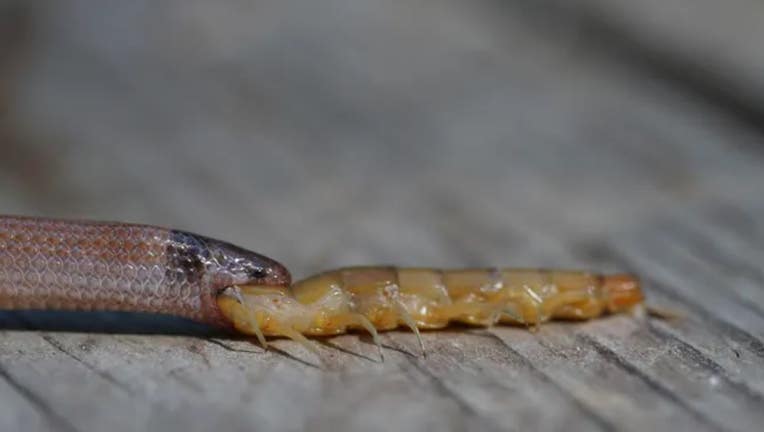 There have only been 26 sightings of this species of snake. Florida is its only habitat on Earth. (Drew Martin)

KEY LARGO, Fla. - For the first time in four years, researchers said, the rarest snake in North America was spotted earlier this year in Florida, but it appears its eyes may have been too big for its stomach.

According to the Florida Fish and Wildlife Conservation Commission, the rim rock crowned snake is a tiny reptile, growing to less than a foot in length, that is only found in a very small part of southeast Florida and the Florida Keys. The head, also known as the crown, is black to light brown, while the belly ranges from yellow to red with black spots.

Researchers at the Florida Museum of Natural History said in a study published Saturday in the journal Ecology, a hiker found the snake on the side of a trail at a park in Key Largo, Florida, in February. What was even more astonishing to researchers was that the snake appeared to have choked on its last meal – a giant centipede about a third of the snake's length. Researchers said they believe the size of the centipede cut off the snake's air supply at its widest part.

"I was amazed when I first saw the photos," Coleman Sheehy, the Florida Museum’s herpetology collection manager and author of the study in a press release. "It’s extremely rare to find specimens that died while eating prey, and given how rare this species is, I would never have predicted finding something like this. We were all totally flabbergasted." 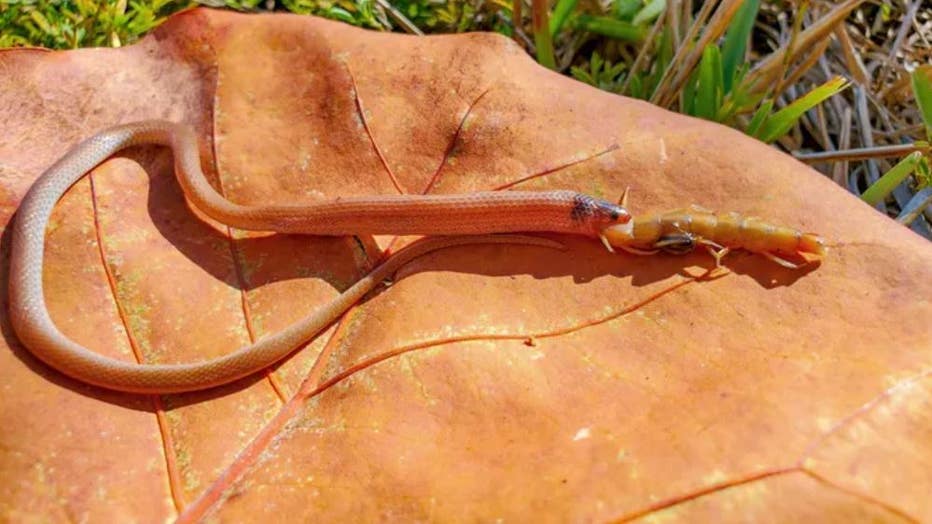 The snake was asphyxiated while trying to swallow a centipede a third of its size. (Drew Martin)

Scientists opted for CT scans instead of dissection to keep the snake as intact as possible for further study on the elusive species.

"We were able to perform a digital autopsy, which allowed us to examine the centipede and snake, including its injuries and gut contents, without ever picking up a scalpel," Jaimi Gray, another of the researchers, said.

How rare are they?

The rim rock crowned snake, or Tantilla oolitica, is one of several species of plants and animals that only exists from central Florida to the Keys along an ancient coral reef, according to the FWC.

"We can’t say for sure whether or not they’re still present in peninsular Florida," Sheehy said. "Absence of evidence is not evidence of absence, but their habitat has basically been destroyed." 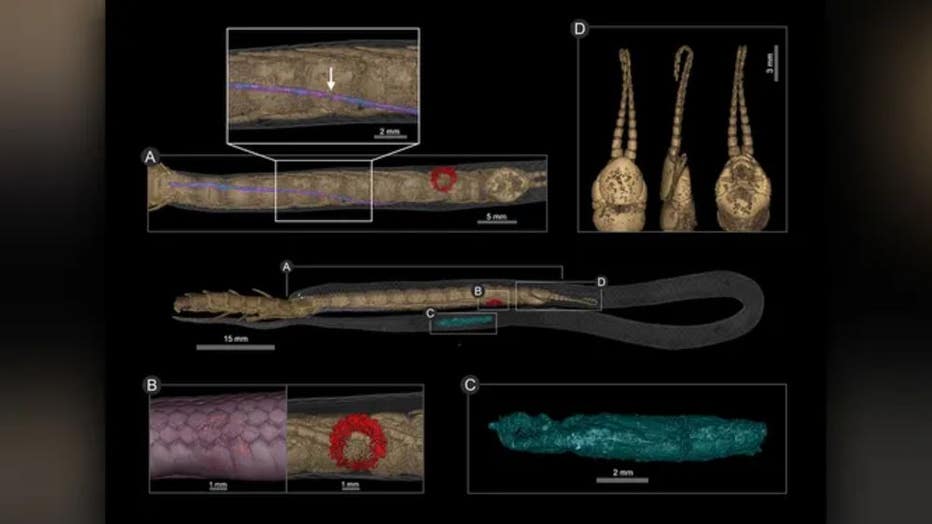 The CT scans revealed the centipede imparted a parting bite (red) to the snake before being swallowed and blocking the snake's trachea (purple). (Image by Enge Et Al)

As cities expanded, the snakes’ numbers dropped. According to FWC, hurricanes and thunderstorms also flood their habitat, which is mostly underground in limestone. They can sometimes be found above ground in rotten logs or hiding under rocks or trash.

The Florida Museum has only cataloged 26 rim rock crowned snakes.

In the wild, life expectancy is about five years. After two years, the snake lays about six eggs per year, according to the FWC. 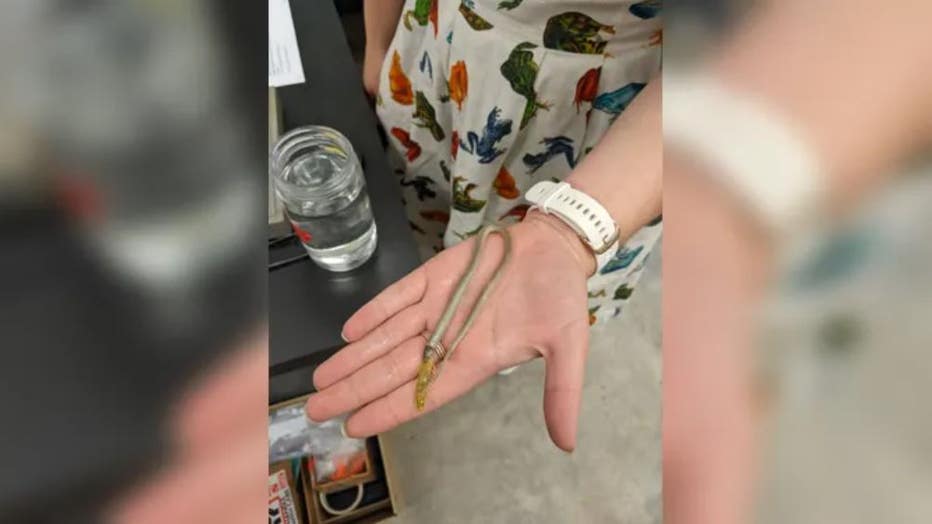 Researchers preserve the snake within the natural history collection for further research on the not well-understood species. (Florida Museum photo by Jerald Pinson)

Snakes have specially designed jaws held to their skulls with ligaments and muscles, allowing them to open their mouths as wide as their prey. Human jaws are directly attached to our skulls.

Sheehy said that snakes literally wrap their head around their food which gives them the ability to eat things that are much larger than they are. 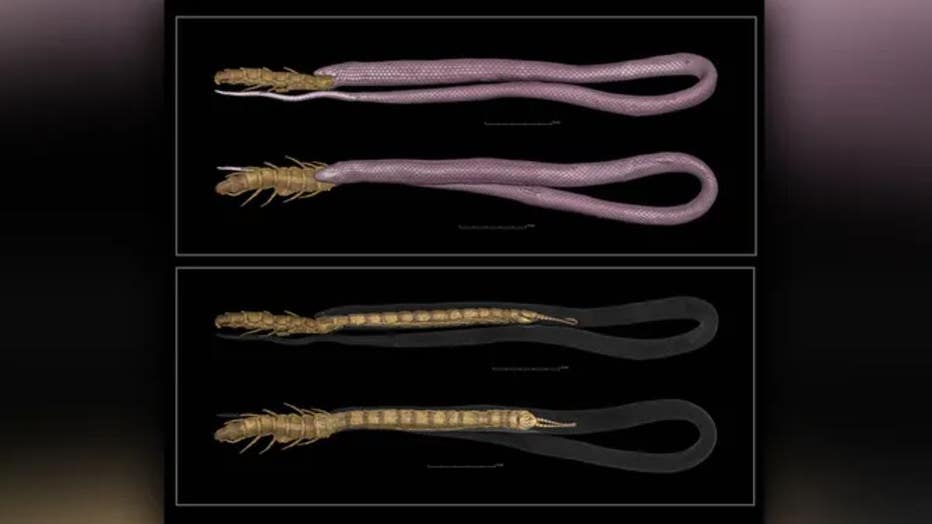 In this case, researchers said, the scans showed that the centipede fought back. Its venomous pincers attacked the inside of the snake, causing internal bleeding. Sheehy said that the wound was not fatal. The pinched trachea was.

Before this CT scan, no one knew exactly what the snake ate. Obviously, they do eat centipedes. This is the first time scientists were able to see the serpent’s eating habits.

The Florida Museum team said they are so excited about the rare find that they are offering up free, downloadable CT scans to other scientists to further everyone’s research.