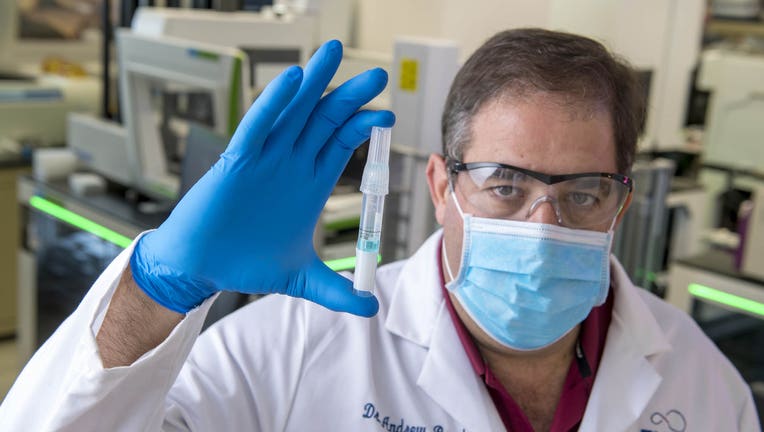 NEW BRUNSWICK, N.J. - A Rutgers University research professor who was a key figure in the development of the first coronavirus spit test has died at age 51, the university said.

Andrew Brooks, 51, is credited with developing the first saliva-based test for COVID-19, which received FDA emergency approval last spring when tests were limited.

In a statement, Rutgers said Brooks died unexpectedly on Jan. 23. Brooks’ sister told the New York Times the cause was a heart attack.

New Jersey Gov. Phil Murphy praised Brooks and his contribution to help combat the spread of COVID-19 amid news of his death. Murphy called him "one of our state’s unsung heroes’’ and said the Rutgers test "undoubtedly saved lives."

"We cannot thank Andy enough for all he did across his career,’’ Murphy said. "He will be sorely missed by many.’’

Brooks was chief operating officer and director of technology development at RUCDR Infinite Biologics, a unit of Rutgers' Human Genetics Institute of New Jersey, and led the effort to develop the saliva-based test.

In April, the test received FDA emergency use authorization as the first approved saliva diagnostic test — at a time when COVID-19 tests were not as widely available. A month later, it became the first of any test approved for at-home use.

With the test, patients are given a plastic tube into which they spit several times. The tube is then sent to a laboratory for processing.

"This prevents health care professionals from having to actually be in the face of somebody that is symptomatic," Brooks said in April, after the test received emergency approval from the FDA.

More than 4 million of the tests have been performed since it was approved, the university said.

Brooks, a New Jersey native, received his Ph.D. in neuroscience from the University of Rochester. He returned to New Jersey to direct the joint Rutgers/UMDNJ EOHSI Bionomics Research and Technology Center and later became chief operating officer and director of technology development of RUCDR Infinite Biologics in 2009, the university said.

He co-authored more than 70 publications and "played a key role in providing consultation, biobanking and analytical services" for several research projects that yielded new insight on genomic etiology of human diseases and the effects of environmental exposures, Rutgers said in its statement.

Brooks also served 17 years as an adviser to the Food and Drug Administration.

Outside of his career, Brooks was an accomplished amateur golfer. He is survived by wife, Jil, and three daughters.

Rutgers-New Brunswick Chancellor Christopher J. Molloy, Rutgers Biomedical and Health Sciences Chancellor Brian Strom and S. David Kimball, Rutgers senior vice president of research, said in a joint statement: "We at Rutgers offer our heartfelt condolences to his family, including his three children, and with them we take pride in his achievements that will have lasting impact."